Ode to Chocolate by Barbara Crooker

I hate milk chocolate, don't want clouds
of cream diluting the dark night sky,
don't want pralines or raisins, rubble
in this smooth plateau. I like my coffee
black, my beer from Germany, wine
from Burgundy, the darker, the better.
I like my heroes complicated and brooding,
James Dean in oiled leather, leaning
on a motorcycle. You know the color.

Oh, chocolate! From the spice bazaars
of Africa, hulled in mills, beaten,
pressed in bars. The cold slab of a cave's
interior, when all the stars
have gone to sleep.

Chocolate strolls up to the microphone
and plays jazz at midnight, the low slow
notes of a bass clarinet. Chocolate saunters
down the runway, slouches in quaint
boutiques; its style is je ne sais quoi.
Chocolate stays up late and gambles,
likes roulette. Always bets
on the noir.


"Ode to Chocolate" by Barbara Crooker, from More. © C&R Press, 2010. Reprinted with permission

Since Janis Freegard’s post about her poetry in the new Iron collection of humorous verse, I’ve been thinking of the way we always seem to value ‘serious’ poems more than humorous ones in critical terms and often anthologise them as children’s poetry or talk about ‘light’ verse. This is rather sad, because a lot of wonderful poetry remains neglected.   So I decided to post something at the un-serious end of the spectrum this week and I hope you don’t think I’m too frivolous! 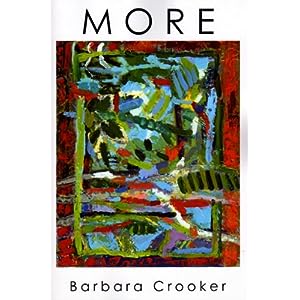 I chose ‘Ode to Chocolate’ because I needed cheering up and I love chocolate - always reach for it when I’m down, but it has to be dark ...... I think the poem somehow gets the essence of the taste of chocolate onto the page - as well as its sensuality and how it makes you feel. Which is quite an achievement. There aren’t too many good poems about food - Pablo Neruda’s ‘Ode to Salt’ perhaps.  There’s also a wonderful poem about eating an avocado - but I couldn’t track it down.

Barbara Crooker is one of the older American poets - a late starter in the publishing stakes, who has won a considerable number of awards for her poetry. She’s an accomplished technician, though I sometimes find her poems just a bit too ‘cosy’ for my taste. I was tempted to post ‘Meditation in Mid October’ because it isn’t and it fitted the season, but thought that the subject, the approaching death of a friend, was just a little bleak.

It has been a challenge for me to read Barbara’s poetry - one that has taken me out of my comfort zone for a number of reasons, one of them being that her work - though not overtly religious, seems to rise organically from deeply held beliefs which are anathema to me. But being a Humanist has never stopped me loving the poetry of John Donne, or T.S. Eliot, or Gerard Manley Hopkins. Then I realised that, when it came to modern poetry, I was choosing the work of poets as I would friends - because we’d got lots in common and understood each other, and this isn’t always a good thing. Being among strangers with different opinions is challenging and very stimulating.

So, last year I set myself the task of reading a new poet every month, and I’ve become aware that there are hundreds and hundreds of poets out there in the world - many of them really good poets - whose work is completely unknown to me. In England we read poetry in a little bubble - mainly British or Irish - some European in translation - some international ‘greats’ like Pablo Neruda or Les Murray - but we rarely interact with the ordinary, everyday poetry of other countries.

Most contemporary Australian, New Zealand, Canadian or American poets are unread here. That, I think, is one of the best things about the Tuesday Poem blog - it can provide a link between islands of culture and showcase poetry that comes from very different directions.

Kathleen Jones is this week's Tuesday Poem editor. She lives in England's Lake District but divides her time between the UK, NZ and Italy. She has published ten books including six biographies and a collection of poetry. Her latest biography, ˜Katherine Mansfield: The Storyteller' was published by Penguin NZ in August. Kathleen is currently a Royal Literary Fund Fellow. She blogs here.


For more Tuesday Poems, click on the Tuesday Poets in the sidebar.
Posted by Kathleen Jones at 12:04 AM

Kathleen, I adore this poem and not just because I also adore chocolate--the darker the better! :-) I also find the poem witty--which for me is more than simply being humorous, although in fact this poem is both--and very well crafted. It's also "warm" humour, which always speaks to me at a personal level, much as I often appreciate the more biting varieties.

As for reading only those with whom we have "lots in common and ... understand"--that always results in "group think", which I have always thought was as dangerous in literature as in politics.

I also love this poem, and for similar reasons to those Helen Lowe mentions above. I especially like the way the characterisation of chocolate is handled is such a clever way, never overdone or overextended. And a great ending, which made me laugh out loud.

I don't agree with what you say, though, Kathleen, about whose work is read/not read in the UK - I have connections with NZ/Australia/Canada/USA which could partly explain my own interest in poets from those cultures, but I'm not the only poetry lover I know here in the UK who reads widely. In fact, most people I know who read poetry don't think it has national boundaries! And I'd agree.

I love Janis Freegard's poem and really enjoyed (yum) this chocolate ode (reminds me of something Billy Collins might write) and agree, funny is good.

Chocolate's like kittens, kids and roses. It's hard to lose. But this is a cracker of a poem, light and fulfilling, it leaves a lovely aftertaste.
From my Kiwiland perspective we know English poets but ignore American, Canadian and surprisingly Australian poets. At our loss.
Good one Kathleen

Exquisite taste as always, smooth and wry. It's nice to find a little comfort in the Tuesday blog, and yet it still feels fresh. A nice little pick me up.

What a poem is "about" is so much less important than how well it's written. And this poem is overflowing with rich (and chocolaty!) language and a facility to manipulate language.

One of the things I love most about this blog is its international sweep.

Thanks for introducing me to Barbara Crooker!

Thanks for all your comments everyone - I'm glad that I was able to give a little (chocolatey) pick-me-up!

This is a lovely poem. Thanks for posting it. I don't think poetry always has to be serious, although of course it can be both serious and funny. This one is seriously good!