1.
The telephone says
The body says
The multinational corporation says
Samoans had taken the sea’s friendship for granted
We can’t imagine            It’s unimaginable
Free phone calls to Samoa             (But only one Samoa)
2.
God’s minister says
God’s children say
God says
The wave was God’s way
We can’t concentrate on our assignments
I prepared a speech but I will not be reading it
3.
Surfer says
Waiter says
Sean says
The sea got sucked down below the reef
What’s one metre of water going to do?
Stupid
4.
Teddy Bear says
Ute says
Baby says
Hello to the pole
Hello to the tree
Hello to strangers on the beach

Credit note: "Pacific Tsunami Found Poems" was previously published in Going Down Swinging No.30, 2010, and is published here by permission of the author.

Editor's Note: Ever since I heard and enjoyed Teresia reading at one of the monthly Ballroom Café poetry readings in Wellington, I have wanted to post one of her poems on the Tuesday Poem blog, and she kindly agreed to my doing so.

Poets in the Asia-Pacific region have had all too many opportunities to write poems in response to natural disasters in the last few years. This is one of the best I've read. 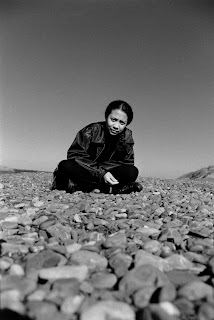 Teresia Teaiwa teaches at Victoria University of Wellington in the Pacific Studies programme.

Her literary publications include a collection of poetry titled Searching for Nei Nim'anoa (available for sale here), and two CDs -- I can see Fiji  and Terenesia: Amplified Poetry and Songs by Teresia Teaiwa and Sia Figiel.

Tim Jones is the editor of this week's Tuesday Poem. Tim is a poet, author and editor who lives in Wellington, New Zealand. His third poetry collection, "Men Briefly Explained", will be published by Interactive Press (Brisbane, Aus.) later this year.

To see this week's other Tuesday Poems, please visit the links labelled "Tuesday Poem" in the sidebar.

sparkling like crystals! thanks so much for bringing this startling poet/poetry to our attention, Tim.
best,
susan

Fantastic! I haven't heard of Teresia Teaiwa before, but will watch out for her from now on. This poem is so carefully managed. Wonderful.

<3 this! Thanks Tim and Teresia!

I haven't encountered Teresia before either and it seems like I am missing out! The repetition of 'says' with the absence of any speech to follow is rather haunting. Thanks so much for sharing, Tim!

Tere and Tim, thank you daughter and thank you editor for sharing this. Verse 4 is particularly poignant... Mum/Joan

I agree - this poem is a powerful creature - its power in the ordinary media-speak that doesn't do justice to the devastation of Samoa because it isn't using the language of Samoa or because there is no language for what has been suffered ...I love 'New Zealand is scrambling/Deputy Prime Minister Bill English' - his name an unexpected pun? I agree with Mum/Joan that the final section is very poignant indeed. Thanks Tim and Tere.