Our minds can turn anything romantic.
Is the problem.
The sewagy mud of the Fraser a quaint muslin & the spumes

pulsing out of chimneys at the Lafarge cement plant look,
at night, like two of Isadora Duncan’s scarves, pale, insouciant veils,
harmless. The trees are all gone but then aren’t our hearts

more similar to wastelands.
We can make it kin, this pollution, children one is sad about yet still fond of, their
delinquency linked to our own, irreparable with familiarity, a lineage of stench &

forgiveness. Our minds can assimilate all horrors.
Is the problem.
The animals will disappear and those small, strange invertebrates,

the bees will vanish & in the well-oiled waters, fish
will surge their deaths over the sand bags.
But then we keep saying, ‘Let’s construct another narrative.’

The nightmares must simply be called reality.
And after this you see,
it is possible to carry on.

© Catherine Owen (posted with permission of the author) 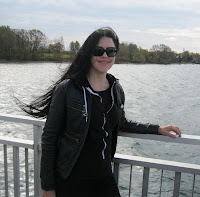 It’s always a delight to take a turn as editor of the TP hub and share poets or poetry others might not have discovered yet. This time I’ve chosen a Canadian poet - Catherine Owen is a Vancouver writer, the author of nine collections of poetry and one of prose, the most recent being Trobairitz (Anvil Press 2012), Seeing Lessons (Wolsak & Wynn 2010) Frenzy (Anvil Press 2009), and the chapbook Steve Kulash & other Autopsies (Angelhousepress 2012).

Her collection of memoirs and essays is called Catalysts: Confrontations with the muse (W & W, 2012). Her work has won awards, been translated & published in North America, England, Italy, Turkey, Australia Germany and Korea. Frenzy won the Alberta Book Prize and other collections have been nominated for the BC Book Prize, the Re-lit, the CBC Prize, & the George Ryga Award.

Catherine is one of the  - newly categorised - Eco-poets and wrote her Master’s thesis, in 2001, on the ecological poetry of Robinson Jeffers.  This year she will be the narrator for a Canadian eco-musical called ‘Awakening the Green Man’, for which she wrote five songs. This poem is from a new manuscript titled The River Sequence, lyrics on the Fraser River, and it first appeared (with two others from the sequence) in an anthology of Eco-poetry called ‘Entanglements’ published by Two Ravens Press.  Catherine is also an art model for Paul Saturley and blogs at blackcrow2.wordpress.com  Her website is www.catherineowen.org

What I love about 'Nature Writing 101' is the way it homes in on the real problem for the environment - Us, and the way we relate to it;  ‘our minds can turn anything romantic. Is the problem.... Our minds can assimilate all horrors’.  Human beings can turn anything into a narrative in order to live with it and the problems never get solved, we just find more and more ways of spinning the story.

The whole fabric of the poem is constructed from the knowledge that the way human beings relate to their environment is through story - we try to make sense of the senseless by creating myths - we tame savage landscapes by romanticising them in poetry and prose.  Word webs become our maps of an unknown universe.  However big it is, however mysterious, we can contain it in a narrative, a verse, a metaphor. We reduce things to the size of our imaginations and in doing so lose all sense of the fact that we’re barely a comma in a plot more complex and gigantic than we can ever conceive.

Catherine’s poems reveal a hard truth, that our pride, greed and lack of self-knowledge will do for us. In another poem she says ‘it is not enough/to have everything – nothing will soon be ours’.  Unless we realise that our nightmares are reality, someone else is going to be telling the story of our extinction.  The irony is that Catherine, in writing the poem, has also turned this ugly prognostication into something beautiful.

Please take a look at the sidebar and read what individual Tuesday Poets are posting on their blogs, and if you like our contributions, we would love it if you could share them with your friends on Twitter and Facebook!

This week's editor, Kathleen Jones, is an English writer who lives in Italy.  Most recent work;  a biography 'Katherine Mansfield: The Storyteller',  a novel  'The Sun's Companion' and a collection of poetry 'Not Saying Goodbye at Gate 21'.  She blogs at http://www.kathleenjonesauthor.blogspot.com

Ah, this is stark and powerful--and echoes my fear that the one thingw e cannot 're-engineer' is ourselves.

... or perhaps I should have said, seem incapable of 're-engineering' or 're-forming' in order to save the planet and ultimately ourselves.

A bow to you, Catherine and thank you, Kathleen.

Unfortunately, yes, it is true. It's a stark commentary on human beings ability to romanticise and fictionalise. Her other poetry is good too.....