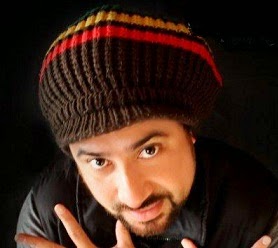 Daren Kamali gets around. A poet of Fijian, Wallis/Futuna and Scottish descent, he was born and raised in Suva, Fiji and arrived in Aotearoa in 1992. He's been writing and reciting poetry most recently in Iowa, as part of the Iowa Writers' Programme. I asked Daren some brief questions about his poem 'Shooting Star' and a few other things. I hope you enjoy hearing more from this poet in this exchange. Thank you, Daren, for sharing your words with  the Tuesday Poem collective this week!  –ME

Let’s talk first about your poem 'Shooting Star'. Do you think this is a typical poem, for you? Is there such a thing?
'Shooting Star' is very different from what I normally write. It’s a very short piece but it tells the reader a lot. Love for family and friends I can write about and tell either directly or in a parallel angle juxtaposed to the Pacific Ocean or tropical blue skies. This, however, is a piece woken by a feeling within for how love or broken love is like that shooting star. I guess the reader may have their own interpretation of a Shooting Star in their life or not. This is part of a collection.

This poem captures that feeling of connection and vulnerability – things central to the notion of love. Are those themes you tend to explore a lot in poetry?
No. I don’t normally write love poems. I may include images and connotations of romance, fantasy or erotica sometimes in my poems, especially in my trilogy Squidluminaries, such as Manteress, the underwater goddess, or Teuthis Drinks AfakasiTwist from my second published book of Pacific poems Squid Out of Water: the evolution – or a few more poems from my first book Tales, Poems and Songs from the Underwater World. As for the four letter word, I have never spoken/written directly like this before.

‘Shooting Star’ has such an optimistic feeling. Do you tend to exude such positivity in your poetry, or is there are darker side as well?
This was an inspired on the spot piece I wrote in Iowa City while I was on the International Writers Residency (Aug–Nov 2014). No, I am not always optimistic in my writings. Normally in my books, Teuthis, who becomes a man from the Giant Squid (Kuita) over centuries, never really finds true love and always seems he is in search of Love, from sea to street to sky. In my last two published collections, you will find predominantly darker sides, dark secrets, beliefs, loyalties, conflicts, half truths, half lies etc, all imagined and experienced from a Pacific Islander's dream/perspective.

Some people say the short poem is underrated. What do you think?
I have never thought about rating before. As a performance poet I used to write lengthy poems but I have come to respect how much one can say in so little words. I must say, I think a poem is a poem. If it needs to be short to tell the story or myth, as long as it is well thought out, structured and comes out right, the length of the poem doesn’t really matter.

Other poets I’ve interviewed have talked about music. What music influences your work? Is there a connection between music and poetry for you?
More recently I have been enjoying jazz music. I’ve always been a reggae and hip hop lover. I would listen to classical music sometimes. 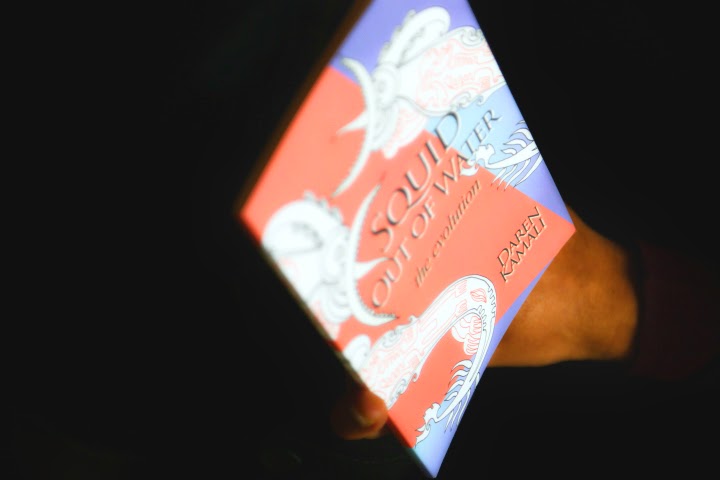 Your first two poetry collections are called Tales, Poems and Songs from the Underwater World (English/Fijian/ Ukrainian, Anahera, NZ 2011) and Squid Out of Water: the evolution ( Ala Press, Hawai’i, 2014). I can’t help but notice references to the sea in your titles and your work. It’s stating the obvious, perhaps, but do tell how the sea is central to your life.
I am a Pacific Islander and I was always surrounded by the ocean, growing up in Fiji and here in AotearoaNZ – but this is not the reason I write about the ocean. The real reason I came back to the ocean theme is because in 2001 I wrote a song titled Giant Squid and a week later it was in The NZ Herald that a giant squid washed up onto a beach in Wellington. I adopted the squid theme, mixed it with different Nesian mythologies and stories, creating a world parallel to the ocean and earth and wrote stories through poetry since then. The sea is my special sanctuary.

Sample from 'What becomes of the Flying Squid?' By DK

He fell in love
with an everlasting fantasy

Your heritage is Fijian/ Wallis/ Futuna/ Scottish. How does such a diverse background impact your place in the world – as an individual and as a poet?
I am proud of my diverse cultural background although I still have yet to visit Wallis and Futuna and Scotland. Fiji is my birth place and an island that will always represent who I really am as an individual. Fiji and AotearoaNZ have nurtured me into the man, father and poet I am today. When I am on stage, especially the international stage, I am always bragging about Pacific poetry or Pacific Literature and representing to the best, as I want people to see that we carry the Pacific in us. I don’t only represent myself, I represent us all. Vinaka. 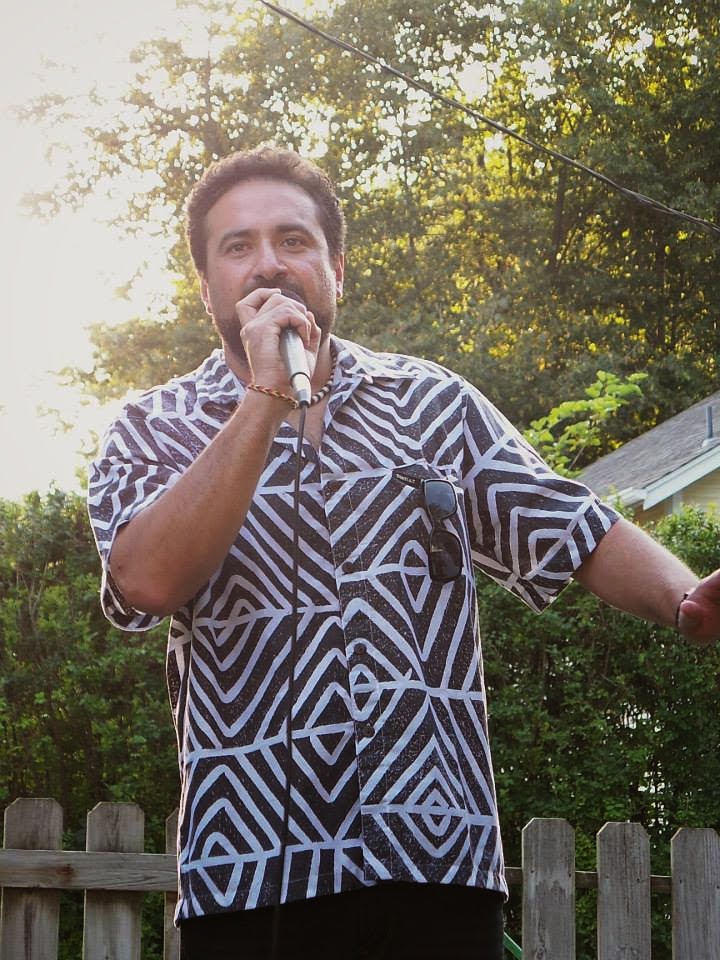 Tell us about your recent stint at the Iowa International Writers’ Program. And what did you write in that time?
International Writers' Program 2014 in Iowa City  – what an experience. Firstly, I want to extend a vinaka vaka levu, a big thank you, to Creative NZ, Christopher Merill, Hugh Ferrer, Natasa Durovicova, the staff and participants of the International Writers' Program 2014 at the University of Iowa. I am very grateful to be the recipient of this prestigious award. I am also very honored and humbly proud to have participated as the first NZ/Pacific Island writer alongside twenty-nine other prominent writers from twenty-nine different countries. Over the duration of ten weeks we grew to know and respect each other which in turn has empowered and motivated me in my writing and outlook on life.

The insight and exposure into different forms of writings, performances and collaborations, especially around poetry in all its academia, its simplicity and cleverness, from very innovative experts from various genres of literature was a true blessing. I want to especially thank John and Virginia Stamler for being amazing hosts, offering me a cottage at Lexington Ave to write, and also opening their home and hearts to me as a resident and guest to their home for the duration of the program. Today I know different writers from different cultures and backgrounds, such an ocean of knowledge, networks and international relations were developed as a result of this residency. The world has become a smaller place.

IWP14 is the highlight of my writing career so far in the last seventeen years. This residency has broadened my perspective and understanding of international writing process and writers, and I realized the need for more Pacific literature to be represented on the world stage on an international level. I am deeply encouraged to continue writing and promoting Pacific literature as far and wide as possible. As a result of this residency I’m in the completion stages of the final manuscript to the trilogy Squidluminaries. I’ve also started working on the manuscripts Mango Bar Collections and 101 Broken Love Poems. During the residency I engaged in readings and presentations at the Iowa City Book Festival, University of Iowa, Shambaugh House and Prairie Lights. I was also invited to present and perform at Buena Vista University, North Iowa, and also in New Orleans at Barb College and in Washington DC where I performed and facilitated a poetry workshop at ‘Split This Rock’. I also visited the Poetry Foundation in Chicago and New York City. Thank you all so much for making this experience memorable.

Who is this guy?
Where is he from?
behind dark sunnies
he sees them all

From the ocean
I give thanks
I am HERE..
dk

Here we have an example of your spoken word poetry, with 'Giant Unleashed'. Tell us more about this kind of poetry. What kinds of poems do you tend to 'perform'?
It has really evolved over time, I still enjoy representing the Pacific in my poetry but slowly exploring other avenues in terms of getting more bold and detailed while performing. Also continuously challenging myself, like with my 101 Broken Love Poems series in the making at the moment.

What’s next for you?
At the moment on the rewriting stage of the final of my trilogy to be published in 2015. Also working on a couple for more writing residencies in the new year. People and places inspire me. Vinaka.dk

Thank you, Daren Kamali! –ME

Daren Kamali is  a poet of Fijian, Wallis, Futuna and Scottish descent. Born and raised in Suva, Fiji, he arrived in Aotearoa in 1992. He has a  Bachelor in Creative Arts, MIT,2014, and graduated from the International Writers Program 2014. He has just completed a stint as a fellow at the University of Iowa writers' program, Aug - Nov 2014.  Other honours include work in the Fulbright/CNZ Pacific Writer in Residence programme and the University of Hawai’i, Manoa, Center of Pacific Island Studies, Aug–Nov 2012. His books include Tales, Poems and Songs from the Underwater World (English/Fijian/ Ukrainian, 2011) and Squid Out of Water: the evolution (2014). His poetry has been featured in Hawai’i Review 2014, Landfall 2014 and Ika Journal 2014.

Michelle Elvy is a writer, editor and manuscript assessor based in the Bay of Islands and currently travelling in SE Asia. Her poetry, fiction and reviews can be found most recently in Ika, Takahe, Revolution John and Entropy. She edits at Flash Frontier: An Adventure in Short Fiction and Blue Five Notebook. She is also an associate editor for the forthcoming Flash Fiction International (W.W. Norton, 2015) and co-ordinator of National Flash Fiction Day. More at michelleelvy.com and Glow Worm.
Posted by Michelle Elvy at 12:30 AM

It's great to see such enthusiasm from a poet.The English language always acquires something fresh and new in South Pacific Poetry. It will be interesting to read more work by Daren in the future.