An act of recovery, they say in curatorial tones, archiving the mundane, rooting through the baggage of inmates deposited long ago for safekeeping, anonymity the new caché, a hunger for narrative free of consequence. Within a small strapped case, the single shirt, carefully starched, his winter drawers and the geography text once memorized to win a ribbon that Mother tacked to the parlor wall, boasting of her genius boy. Before he began drooling in church, tweezing the hairs from his forearm, singing to himself as he walked to the foundry after a breakfast of oats and beans and splashing his cheeks with her cologne. Before he began seeing things that weren't there and begged her for stories in Polish to soothe his fears, his grief for uncles buried in an old world and the clumsy name no one in town could pronounce. He lived out the balance of his days in gray pants and black shoes, took meals at six, twelve and six and dug graves when told to. His single pleasure, if you dare call it that, the school book, a quiet, solid thing upon his lap each afternoon, his fingers as smooth as the pages, patting it, stroking it, to calm the seas roiling between its covers.

Editor: Susan T. Landry
I am drawn to prose poetry. I am not sure why; maybe it is because I trust that the linear configuration will deliver me a story in a tidy package. Surely, a story lies inside, as surely as a fortune resides within a fortune cookie. Other cookies may have their rewards, it is true; but, reliably, it is the fortune cookie that will divulge a treasure. Like prose.
I know better; I've read some supremely fine story telling in traditional skittering-all-over-the-page poems. But push comes to shove, I'll take a prose poem. I discovered Holly Iglesias on a prose poem ramble, and just in case you haven't had the pleasure, I'm here to introduce you to her. 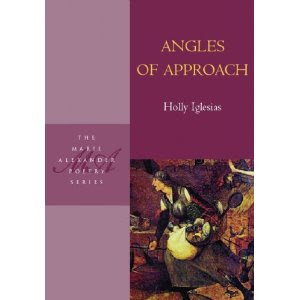 "Conceptual Art" was written after Holly Iglesias heard a radio report about an exhibit of suitcases and other belongings of patients, objects that remained behind in a mental institution that was being demolished.


It is not necessary to know the historical stimulus for this prose poem. When I first read this poem, I was completely engaged by the clean visual language, and imagined a stark stage setting against which a mysterious and sad story unfolded. It was only later, when I corresponded with Holly, that I realized I had seen the traveling version of this show, at a branch of the NY Public Library, when I lived in the city, in 2007. 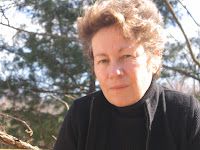 Holly Iglesias, PhD, teaches at University of North Carolina-Asheville and has published several books of her own poems as well as a critical study of prose poems, Boxing Inside the Box: Women's Prose Poetry. She received a creative writing fellowship from the National Endowment of the Arts, for 2011.
"Conceptual Art" was first published in the journal Bloom, vol. 1, no.2, Summer 2004, and subsequently in Iglesias' book Angles of Approach, by White Pine Press, 2010. Holly Iglesias has graciously permitted Tuesday Poem to publish her poem here.

Susan T. Landry, of the United States, writes poetry and prose with a particular interest in memoir. She lives in Maine, works from home as a medical manuscript editor, and writes in her blog, Twisted Knickers, as part of her ongoing quest to explore all available avenues of procrastination. Please do visit our other Tuesday Poets, listed in the column on the right.

This is a wonderful and melancholy poem.

Mm, lovely how the poem itself becomes an act of recovery. Holly's collection sounds fascinating - I shall have to seek it out.

Thanks for the introduction to us, Susan, of Holly Iglesias. Such a heartbreaking poem, sad even before you know the back story. The great thing about a prose poem is that it has the square shape of a tale, even a box, within which who knows what riches can be found. xo

Yes, thank you for introducing us to Holly Iglesias, Susan. Prose poem is a satisfying form for me, too (your description of the fortune-cookiness of the prose poem is great - as is Melissa's; 'the square shape of a tale, even a box, within which who knows what riches can be found.'
So much is contained in the last line here, the sad yet almost devotional attitude with which the man places the school book in his lap each afternoon, '. . . patting it, stroking it, to calm the seas roiling between its covers.'

This poem is so present. it is sad but not in a voyeuristic way. it just is what it is. Beautiful!
Thankyou.

A very moving poem, with the material captured well in the prose form.

I love the mystery of this poem. It lends itself to a myriad of interpretations and it leaves you wondering about the central character. It lingers in the mind, which I love.

Thank you so much for reading Holly's poem and leaving your thoughts.

I sense this prose poem is poignant in spite of itself. It begins coolly, it ends with an almost inhuman unbearableness, the unclaimed suitcase evocative of so many sad stories, the textbook as touchstone makes it personal.