tortoise: from the Greek, tartarchos; ‘god of the underworld’

As I fell, I burned
through shame and grief
and disbelief and love –
words that trail like smoke,
like broken wings.
Only rage was left –
its silken tongue, its
crystal shell. I fell
through night and time
into the morning
of this world, and
kept on falling.
Once, I lived
by passion’s flame,
but I learned
.
cold blood
is better.

It’s been six thousand years,
give or take. This shape’s as good
as any other. I am fortress,
island, rock – a treasure chest
with a living lock no thief
can pick. I walk in armour,
plastron thicker than a tank.

The only mark of then
is a reflex twitch, a flinch,
a body thing I still can’t shake
beneath the fear of wings.

When I heard what happened
to Aeschylus, I laughed so hard
I nearly split my shell. Well,
I see He hasn’t lost His sense
of humour.

Once, all this was sand. Sand and cactus,
sand and yuccas, sand and black brush,
gila monsters, sand and sand. Hell
of a place to land in,

a dried out basin
in the mountains. Not a blade
of grass to graze on, not a flower
without thorns.

I listened
to the blood-song of the desert

I built this kingdom for myself
from memories.

The dry-bones chatter
of dice from a rattler’s tail, and the girls
pink and gold like gaudy birds.

The cardshoe started out an empty
tortoise shell (I bear no rivals),

baize-covered tables for the cropped
green fuzz that gave this town its name.
And the one-armed bandits – sheer genius,
like teaching cows to milk themselves.

The gambling chips began as skutes, then clay,
then plastic.
Now I use men’s souls.
Why not? They’re light and plentiful, and have
no other value but my mark.

We do it all – the wedding, the divorce, the
post-loss suicide. If you want it,
you can get it.

but now it feels empty.
Abandoned. Mere clouds of dust
condensed into stars and space.
I stopped searching
its blank face for signs
of forgiveness aeons ago.

Look down.
From the high-stakes room
the glitter of money
puts starshine to shame.
Look down. All the people
who flock to my shepherds, who pray
at my temples …

Look down.
I hurl a handful
of orange chips into the air –
watch the sheep scrabble
and crawl at my feet.

At night, look down
from space and Vegas is the
brightest thing on this world.


Look down, damn you, and see.

Reproduced on The Tuesday Poem Hub with permission.

I am a great admirer of Joanna Preston's poetry and consider her award-winning, debut collection The Summer King (Otago University Press, 2009), one of the most interesting and integrated I have read in recent years. The poem I am featuring today, Lucifer In Las Vegas, is a new poem, but encapsulates a great many of the elements that first drew me to Joanna's work: wit, intellectual inquiry, the dexterous use of "voice" within the poem, and the unerring delivery of an emotional payoff for the reader.

Lucifer In Las Vegas offers all these elements, as well as quite stunning use of language, including the powerful opening:


"As I fell, I burned
through shame and grief
and disbelief and love –
words that trail like smoke,
like broken wings.
Only rage was left –
its silken tongue, its
crystal shell. I fell
through night and time
into the morning
of this world, and
kept on falling ..."

I also love poems that tell a story. As both a poet and Fantasy novelist, I really love a new, exciting take on an old story – and the moment of recognition when you first "hear" that new "voice", in this case of Lucifer, recounting the fall. There is pathos in the account, emotion that is framed, as well as contained, by the juxtaposition with the "archangel ruined" 's metamorphosis into a tortoise – and the subsequent transformation of the barren desert into Las Vegas. The transition is convincing, as is the unfolding of the "voice" – with the whole of the poem, as well as its diverse elements (e.g. the fall, the tortoise, the desert, Las Vegas) all pulled together by that final compelling, and revealing, line:

I am honored to be able to feature Lucifer In Las Vegas on The Tuesday Poem Hub today. I am also a great believer in poems speaking for themselves, so I will now simply say that I hope you enjoy the read as much as I have. 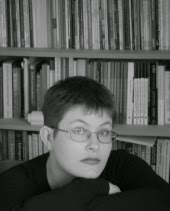 Joanna Preston is an Australian-born poet, editor and freelance writing tutor who lives in a small rural town in Canterbury, New Zealand. In 2008 she won the inaugural Kathleen Grattan Award for Poetry. Her first collection, The Summer King, was published by Otago University Press in July 2009, and won the Mary Gilmore Award for the best first poetry collection by an Australian author in 2010. She has an MPhil in Creative Writing from the University of Glamorgan (Wales). She worked for three years as a part-time tutor in Creative Writing at Christchurch Polytech, and was co-editor of Kokako magazine from 2009 to 2012.
.
.
Today's editor, Helen Lowe, is a novelist, poet and interviewer whose work has been published, broadcast and anthologized in New Zealand and internationally. Her first novel, Thornspell, was published to critical praise in 2008, and her second, The Heir of Night (The Wall Of Night Series, Book One) won the Gemmell Morningstar Award 2012. The sequel, The Gathering Of The Lost, was shortlisted for the Gemmell Legend Award in 2013. Helen posts regularly on her Helen Lowe on Anything, Really blog and is also active on Twitter: @helenl0we

In addition to "Lucifer In Las Vegas", be sure to check out the wonderful poems featured by the other Tuesday Poets, using our blog roll to the left of this posting.
.
Posted by Helen Lowe at 12:00 AM

This is wonderful!! Many thanks for posting it.

This is such an amazing poem, Helen. Thanks for sharing it.

Brilliant! Thanks for posting, Helen...:)

Great poem! And so true about the "voice" - it elevates the "storytelling" to a personal level and gives the emotions so much more force. The last line would be less powerful without the "voice" building up to the end. Thanks for sharing such a great poem!

Thank you for your appreciation and positive responses -- which of course the poem throughly merits.:)

Great to see Joanna here on the hub!
Lots of dark depths in this and unpleasant truths but written with such empathy and humour that it makes a really good read. A great take on an old story!

Wow, there is a whole novel in this poem. Amazing content and style. I like your discussion too, Helen. Wonderful to get here this week, finally! Worth the wait.

Wow, there is a whole novel in this poem. Amazing content and style. I like your discussion too, Helen. Wonderful to get here this week, finally! Worth the wait.

Oh I do like this, very much. That last line gave me chills. Thank you for posting.

Thank you for your comments, your insights, and your enthusiasm.:)