They Could Have Stayed Forever by Joan Fleming

There’s a free beach somewhere close to here, where everyone’s covered in sand. And everyone knows that sand is time, or time is sandy, and all the barriers are striped, red and white, like Christmas candy. But no-one’s there. They couldn’t find the rhyme for fun hiding in their pocket money. There’s only the space where they ate spun sugar, then floated off the boardwalk after their snack. Now, open palms in the endless season of these audacious empty spaces shiver, wave. And now, you can find out what it is the dead sea craves: for you to wade in and let your eyes sting in its salted buoyancy. To watch the sky change as you float on your back, from blue to grey to silver to black.

Joan Fleming is not a British writer of crime and thriller novels. Joan Fleming has not had a distinquished career in the field of psychoanalysis. However,  I have seen Joan Fleming read Freud. I also witnessed her take 20 dollars from our swear jar. "I'll pay it back!" she said. We never got that beanbag for the office because we have both been helping ourselves.

Joan Fleming, the Joan Fleming that I know, is a super talented poet, and probably one of the kindest people I have met. So I am very pleased to present one of her poems here on Tuesday Poem.

This poem was written to accompany an exhibition of photography by Kate Van Der Drift, made up of large scale, high-key outdoor scenes of abandoned holiday places. These quietly still, beautifully eerie photographs, taken near Israel's dead sea, convey a sense of migration, emptiness, and change. Something has happened: the people have left, found another place or another planet to inhabit. It is not sad but hopeful - the end of one thing and the beginning of something new. 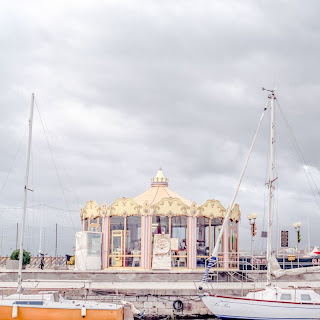 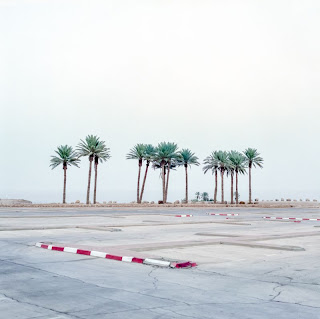 Joan's debut collection, The Same As Yes, was published last year by VUP. In 2007, she won the Biggs Poetry Prize; her work has also appeared in a number of places such as Landfall, the Listener, Sport, 150 New Zealand Love Poems (Godwit: 2012) and The Best of Best New Zealand Poems. She is currently finishing her MA at the University of Otago where she is writing about Anne Carson and iterative poetics.

This week's editor Orchid Tierney  is currently finishing her MA at the University of Otago, where she is writing about electronic literature.

Enjoy more wonderful poems from our Tuesday Poem contributors by navigating the left side bar.
Posted by O at 12:01 AM

Wow, wow, wow. This is so haunting, aching, empty. The traces left behind particularly struck me - the candy cane barriers devoid of people. Stunning. I will have to seek out Joan's VUP collection!! Thanks so much for sharing, Orchid :)

This is beautiful Orchid. it was so good to meet you the other evening - just sorry we didn't have more time to talk. I'd have loved to hear more about your masters.

What a fabulous link, the spare, haunting images portrayed by Van Der Drift and the imagery conjured by Flemmings words, wow.

I enjoyed this, thanks for posting, Orchid.

Gosh! That's an amazing poem. Thanks for sharing it Orchid, and thanks for writing it Joan. I'm a big fan of Joan's work, and I feel like there's a further development or twist of something in this poem. I love the sneaky rhymes, which are especially lovely in a prose poem, where you wouldn't quite expect them.