Brasch in his velvet
voice and signature
purple tie

complained to his
journal that you had
'interrupted'.

I wasn't sorry.
That was Somervell's
coffee shop

nineteen fifty-three.
Eighteen months
later you and I

were skidding on the
tide-out inner-
harbour shelvings

that geranium 'wild
on a wet bank'
you suggested

was 'the reality
prior to the
poem'. Son of

Christchurch and the
church you'd come north
to be free perhaps,

to be employed and
in love, and were
making the most

of it in poems that
gave to old 'summer'
new meanings.

Ten years ago
we launched your last
book, The Bells of Saint

its shallow bays
and touch-and-go
tides. You wrote in

my copy (sure I
wouldn't have
forgotten the source)

'To Karl, always
"somewhere in earshot".'
What you left out

was 'for the story's
end'.  You must have
guessed it was close.

Today no end
to your occupation
of the bland

Waitemata
nor of wild
Karekare where we

shared Lone Kauri
Road. The pipe across
Hobson Bay is

replaced by a
tunnel. Tohunga
Crescent has some

new polish but
nothing you would
deplore. The tuis

creak of you. But
this 'blood-noon breathless'
Auckland summer

is the season you
gave us in making
it your own. 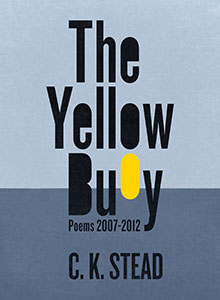 The Gift by C.K. Stead first appeared in the London Review of Books in 2011 to commemorate the centenary of fellow NZ poet and Queen's Medal winner Allen Curnow's birth, and the ten years since his death.

Reporting on this, Graham Beattie of Beattie's Bookblog said, 'Stead began writing for the LRB under the editorship of Karl Miller, the paper’s founder. Miller was Professor of English at University College London in 1977 when Stead was there as an honorary fellow and visiting lecturer.

Stead introduced Miller to Curnow’s work and wrote about it for the paper, after which Curnow became a fairly frequent contributor of poems, and this continued after Mary-Kay Wilmers, second in command under Miller, moved into the editorial chair.'

The poem begins when the two men met as Auckland University student and lecturer and goes up to the time of the launch of Curnow’s last collection of poetry before his death fifty years later. Curnow and Stead were neighbours in Tohunga Crescent for three decades and in Lone Kauri Road at Karekare on Auckland West Coast, where both had baches.

'The Yellow Buoy' is the 16th poetry collection by Stead out of a total of 44 books of poetry, fiction, criticism, and memoir he's written and edited, and I have had the pleasure of reading it for review on National Radio's Nine to Noon show on Friday. Which means I can't review it here, but I can introduce TP readers to the poem and the man.

While working as an academic in both NZ and the UK, C K Stead became one of our country's most distinguished writers, winning a number of leading literary prizes including the world's largest short fiction prize - the Sunday Times EFG Private Bank Short Story Award, and the open section of the 2010 International Hippocrates Prize for Poetry and Medicine.

He's also the winner of a number of national book awards in this country, as well as the Katherine Mansfield short story award and Memorial Fellowship (which took him to Menton), and the Prime Minister's Award for Literary Achievement in Fiction. More on him here.

Contrary to the impressive solidity of such achievements, The Gift skips into its subject with its thirteen-syllabled tercets - the delight and sense of mischief, palpable. And it takes them off, the two poets - both geniuses of a kind - to the place of 'touch-and-go tides', in a way that makes me think of the marvellous poem by Bill Manhire, Opoutere, an elegy to friend and fellow writer Michael King who died suddenly, leaving behind another place of tides and fish. These sorts of insights into the lives of prominent NZ writers and their work - our writing history, if you like - I find fascinating. But it's also a lyrical poem about two blokes who hung out in the way blokes in this country do.

The quote Curnow inscribes to his friend Karl Stead is by Yeats, by the way, underlining perhaps the mentor relationship here, and I'm guessing there are a number of references between the lines to poems by Curnow himself apart from the obvious ones. 'Storms too in wooden/ houses sometimes// creak of you', for example, seems like a firm nod to Curnow's Wild Iron which I posted on my own blog just last week on a particularly windy night. Lovely stuff, that 'blood-noon breathless' Auckland summer - especially given the weather we've been having (apart from that windy night, and that was Wellington).

The whole collection, written as Stead neared his 80th birthday, is anchored by poems about the poet's friendship with and appreciation of writers alive and dead, and the places they inhabited. People such as Frank Sargeson and Robin Dudding and Kevin Ireland and Katherine Mansfield and Eugenio Montale. The poems evoke both a sense of loss and an appreciation of gifts received, and they talk to another batch of poems which deal playfully, curiously, stoically with the fact of being old and what it will, in time, bring.

Strangely, I was at a Katherine Mansfield event yesterday in Wellington, and who was there but Kevin Ireland whom I'd never met before. 'I've just read a poem about your wedding!' I blurted, and turning to the woman beside him, 'This must be your wife, Janet Wilson.' (She's named in the poem.)

It's not all weddings and funerals and walks on the beach. C K Stead is no stranger to literary controversy and his latest collection doesn't completely step away from that. Near the end, there's a poem that's a succinct nine-line retort to a Vincent O'Sullivan poem that once criticised Stead - if you're interested in that kind of literary spat, you can start following the trail in the notes at the back. It's another part of the conversation at the heart of the book.

When you've read The Gift, please take time to look in the sidebar which links to poets from around the world who choose a poem written by themselves or others every Tuesday.

This week's editor Mary McCallum is a novelist and poet who lives by the sea in Wellington, New Zealand, and blogs at O Audacious Book. She is co-curator of Tuesday Poem and this year's coordinator of the NZ Post Children's Book Awards Festival.

Splendid CKS poem and commentary, Mary. All of it vital, compelling, alive.

Oh for lines such as these -

Thanks to you both
C

Thanks for sharing that poem Mary, and your great commentary. The lines and stanzas are much shorter than what I would have expected from Stead, but then he's a poet who isn't afraid of variety.