I’ve only just started
witchcraft so this letter
includes some of my hairs.

Mum says they have the
eyeless ways of newborns.

Friday and I’m sitting
in the quad under the
acacia tree.

The bell has rung
and I’m waiting for
Mum or Dad to pick me up.

No one has come. It is
strange.

Mum says I don’t feed
them often enough but
I do.

My lips are in a terrible way –
they are so fannyish

when I am older they
will droop.

some kind of
life-ish trouble.

in July a meteorite fell?

Blue flashes in the
field it

still glows in the
rain sometimes.

But that doesn’t mean nuffink –
it still sucks shit to
live in the bush.

Return to your thankfulness as
we all may go blind somewhere
down the road.

During a yellow October
an old book, a few lavender seeds.

Place between and bring the
palms of paper together.

bury in the woods
beneath the light bounced
off the moon.

your heart glow
so red
when it rains.

I feel like a cagey fox in a
field where there are no
delicious babies to eat.

Maybe it’s because I am
waiting for dinner – it seems to
take so long these days.

Yesterday Mum crashed the
car. I didn’t know till
they drove past me on the road
and stopped.

It was really strange – Mum and
Dad looked like two people
who didn’t know me.

You know in the movie how
Sarah and Bud acted when they
first started going round?

Well, a sad version of that,
like it was just
them on the planet.

or like a boat out and tangled
in the mangroves

getting farther and
farther away.

Pen Pal, by Sugar Magnolia Wilson (or Magnolia, as she is generally known), is a rather twisty sequence of poems, in the voice of a young, not-so-sweet, not-so-innocent, and actually very real girl. There’s definitely a narrative running through the sequence, but (or, and), like the best narrative poetry (or maybe narratives in general), story isn’t the only thing that’s going on, as I hope you can see from these extracts.

It was hard to choose which sections to share here, but I chose these three from different parts of the poem, as they give a bit of an idea of the range. The first part sets it all up, and then I had to include one of the gorgeous spells, and I find section 10 so haunting. I hope you will love it too.

The 15-part Pen Pal sequence was the first publication from the new Cats and Spaghetti Press, which is run by fantastic poet Emma Barnes and fabulous novelist and short-story writer Pip Adam. (Emma, Pip and Magnolia all live in Aro Valley, as do I and quite a few other writers. We are challenging Paekakariki in the most-writers-per-square-inch challenge.) 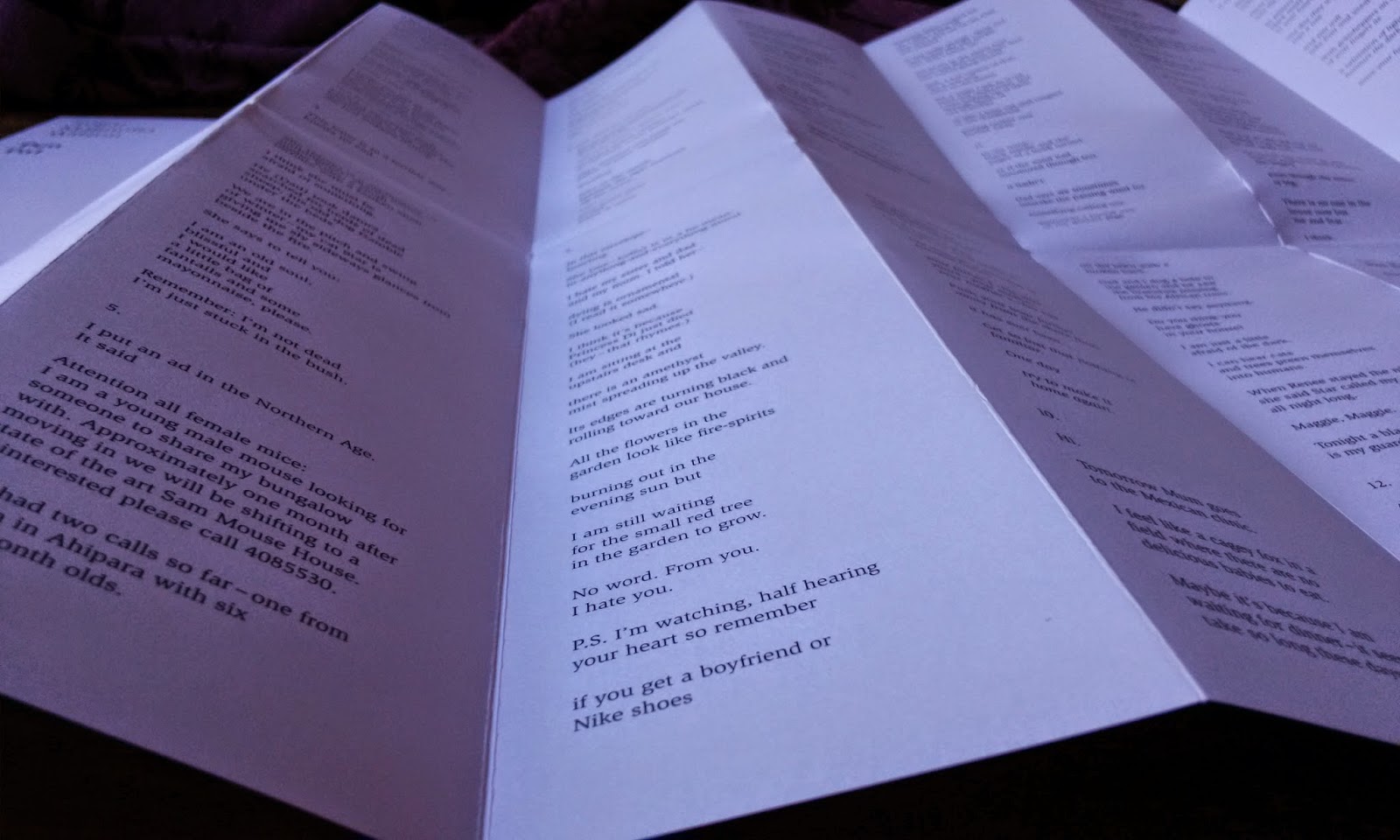 Emma and Pip have decided to do this publishing thing their own way, and Pen Pal isn’t a book so much as a fold-out wonder, with its elegant embossed metallic-pink cover, to the ‘pages’, which you can open out completely, or read in a more book-like fashion. The reverse side of the paper has an illustration of a cat and meteor (which both feature in the poem) by Julie Jeon, who also did the design. 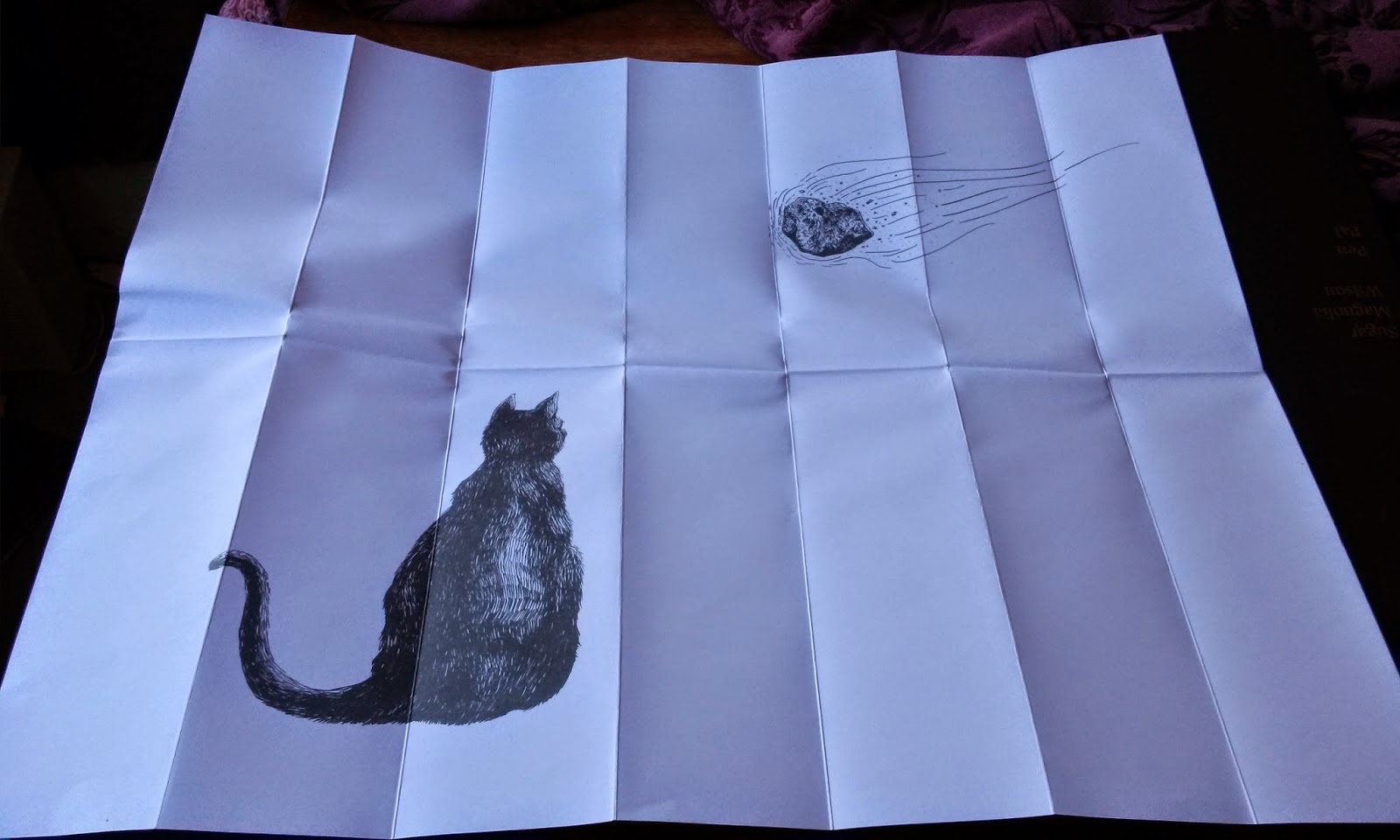 Cats and Spaghetti also didn't release their first publication in the usual way - there was a launch, but no sales: the limited edition booklet was given away. This sadly means that there are no more available, but Emma has kindly sent along a pdf, which means that you can read the whole poem and get a bit of a sense of what it looks like: Pen Pal PDF.

Cats and Spaghetti’s second publication was the online journal Rejectamenta, which published work that had previously been rejected by other journals, along with their (real or made-up) rejection letters. And I'm really interested to see what they will do next. 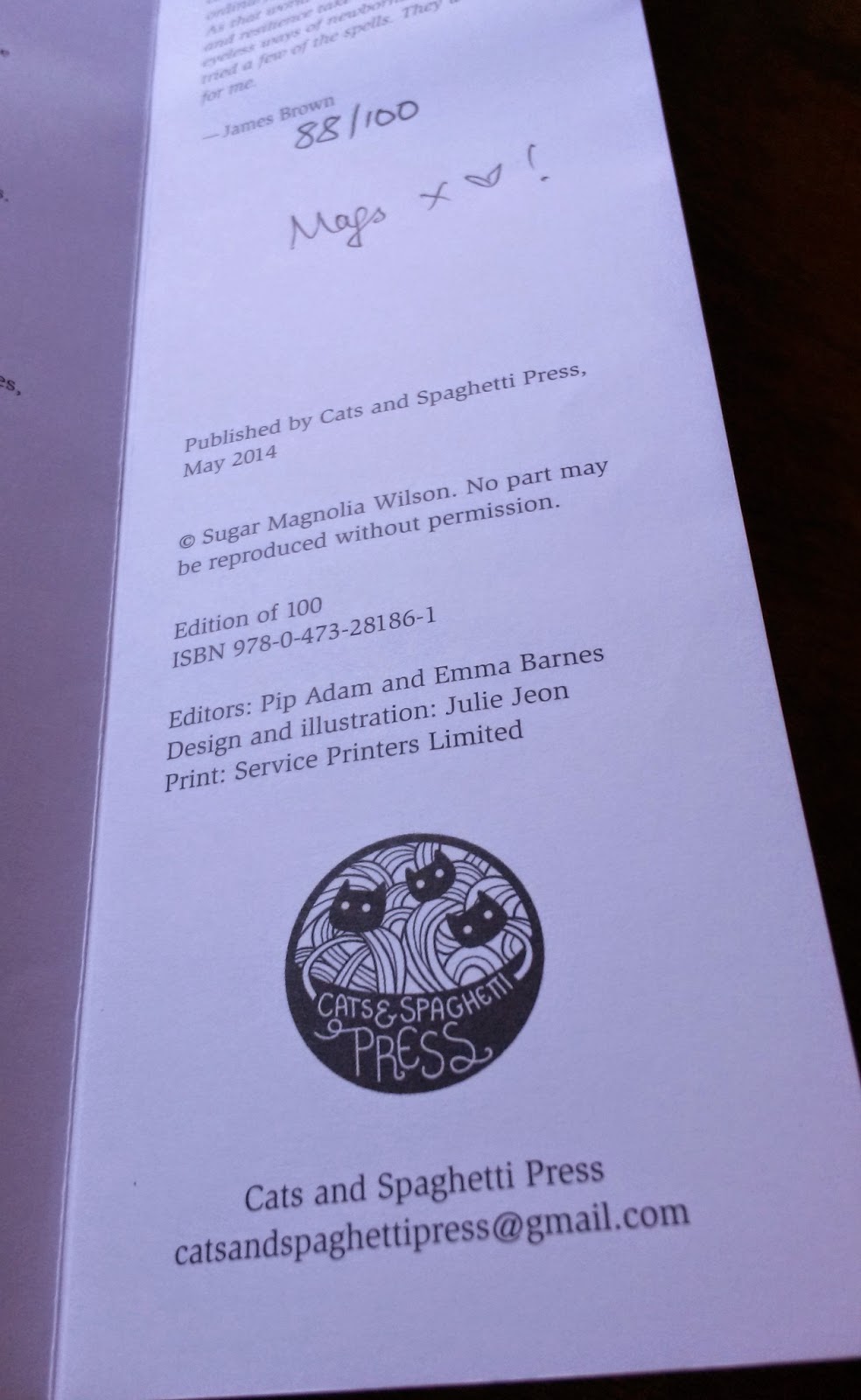 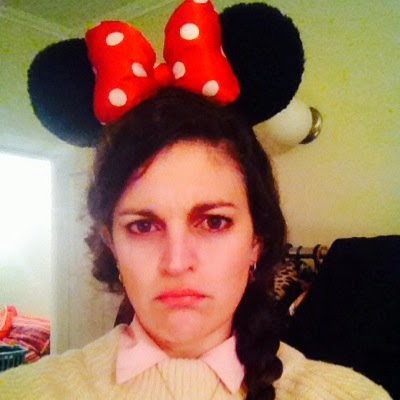 Sugar Magnolia Wilson is from a valley called Fern Flat in the Far North of New Zealand. She completed her MA in creative writing at the International Institute of Modern Letters at Victoria University of Wellington in 2012. She has had work published in New Zealand literary journals such as JAAM, Turbine and Minarets. In 2014 she, along with Hannah Mettner and Morgan Bach, started the new journal Sweet Mammalian. You can read more of Magnolia’s poetry online in Turbine 12, Turbine 13 and Shenandoah.

This week’s editor, Helen Rickerby, is a poet and publisher from Wellington. She has published four collections of poetry – her most recent, Cinema, was published by Mākaro Press in 2014. She runs Seraph Press, a boutique publishing company with a growing reputation for publishing high-quality poetry books, and she is co-managing editor of JAAM literary journal. She is currently indulging her interest in biographical poetry (about which she recently co-organised a conference at Victoria University of Wellington) by writing prose poetry about George Eliot.

Check out more Tuesday poems in the sidebar.
Posted by Helen Rickerby at 12:30 AM

Hey, I love this--and great to get the backstory of the poem's publication as well.

I love this! It made me want to sit down and write straight away. The voice is so compelling and right. It reminded me of young adult writers whose work I love - Francesca Lia Block, for example. And a lovely publication story as well.