"Breathing You In" by David Gregory

From up here it looked
as if the harbour’s lungs inhaled
the fog in through the headlands;
light as breathing, concrete coloured,
it set in for the day, giving us each a bubble vision
containing what little we know,
and out beyond the garden’s edge;
all life arrested.

There was a fog of the familiar
such that I could not see
all of the changes underway
between you and me.

But then the sun splashed down,
rinsing the hills, draining the fog to seaward.
Across the water, your house was sun-washed.

I thought I might see you there again,
the last of the mist upon your lashes,
each tiny world a globe
in which anything is possible.

David Gregory was a guest reader for the 2014 Canterbury Poets' Collective Spring Reading Season and although I have been familiar with David's work for a number of years now, listening, I was struck again by the quiet elegance of his poetry and his formidable "way with words."

I had a difficult task selecting a poem to feature on the Hub today for much the same reasons – but believe Breathing You In displays both quiet elegance and a formidable way with words "in spades." From the assurance of the opening image:

we are drawn into the landscape of the poem, which takes us from the fog and the harbour heads to the "garden's edge" where we also encounter the "fog of the familiar" which obscures:

"all of the changes underway
between you and me.".


Breathing You In is a poem of juxtapositions, with fog that is both "light as breathing", yet also holds the weight of being "concrete coloured." It is also a poem of subtle repetition, from the "bubble vision" of the first stanza to the:

"last of the mist upon your lashes,
each tiny world a globe"

So, too, the landscape of the poem also takes us from the large (the fog settling in for the day), to the small (each globe of the mist upon lashes) but then springboards us back into something large again:

"...each tiny world a globe
in which anything is possible."

This is poetry of the everyday, apparently unassuming, that leads us, step by assured step, into an awareness of something larger. It's also a poem of considerable emotional strength, but one in which every emotional brushstroke is delicate, understated... And therein, I believe, lies its power, from:

"...I could not see
all of the changes underway
between you and me.

"Across the water, your house was sun-washed.

As readers, we are not sure whether such a "seeing again" will occur or not – but the poem allows us to feel the possibility that it may: we take that step back into the larger universe of hope, offered by the concluding stanza and line: "in which anything is possible."

Quiet, elegant, assured: this is also the poetry of alchemy, where the everyday is transmuted into a more transcendant experience. I am so pleased that David has allowed me to share both the poem, and the delight it evoked in me as a reader, with you today.
. 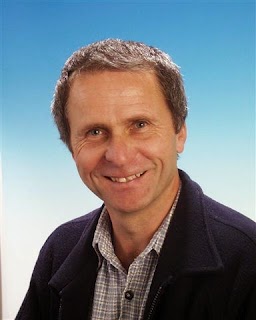 David Gregory has had three books published in New Zealand, Always Arriving and Frame of Mind, both by Sudden Valley Press and Push by Black Doris Press. His poetry has appeared in a goodly number of publications and anthologies and he has performed his work here and in the UK. He is an active member of the Canterbury Poets Collective, which organises regular readings, designed to give new writers a performance platform and to expose them to good poets in the form of guest readers. David has been involved with this for over 15 years. He has also been involved in an editorial capacity with the production of over 30 high quality titles for Voice Prints and Sudden Valley Press.

In addition to "Breathing You In", be sure to check out the wonderful poems featured by the other Tuesday Poets, using our blog roll to the left of this posting.
.
Posted by Helen Lowe at 12:00 AM

Thank you, David and Helen.

Beautiful! From that first astounding image on - thank you.

I love this poem Helen - the elegance and the 'rightness' of the images and the language gives such a sense of simplicity that it hides just how clever it all is. Thanks for introducing me to this poet. Beautiful!

What a marvelous poem — and yes, alchemy!

Thank you for posting.

I think it's all been said above. This last verse though...
'the last of the mist upon your lashes,
each tiny world a globe
in which anything is possible.'
It's perfect.
Great to see David here too. Thank you
Helen.

I've been re-reading and sharing this poem all week. Lovely on so many levels. So glad to see this here, Helen -- thank you!

I'm glad you've all enjoyed the poem--as I enjoyed being able to feature it and write the commentary.