This Is Love by Gemma White

Those swish-swish hips
Buttocks swelling in suit pants
Brief exposure of elliptical breast
Guitar thrust! And thrust again!
Flick back of black, black hair
Angle-faced with red lipstick
Lopsided grin from ear-to-ear mouth
I want escape and release!
Take me white-suited goddess,
Take me over with your song!
I am sacrifice to your guitar slinging,
I want to lick its strings
You're a sacrilegious hymn, a hint of fuck-you
Cracking through my monochrome world
A whiff of something rare
Buzzing electricity through every hair
A whole 3.48 minutes of ecstasy.

from Furniture is Disappearing (IP, 2014) by Gemma White. Reprinted here with the kind permission of the poet.

Furniture is Disappearing is available from the publisher and on Amazon. Gemma also says:


I sell Furniture is Disappearing in person at local open mic nights around Melbourne (the next one is at WestWord Poetry, @ The Dancing Dog on the 26th of April, see www.facebook.com/events/857275297646951). The Facebook page for the regular Footscray poetry event is here: www.facebook.com/WestWordpoetry. 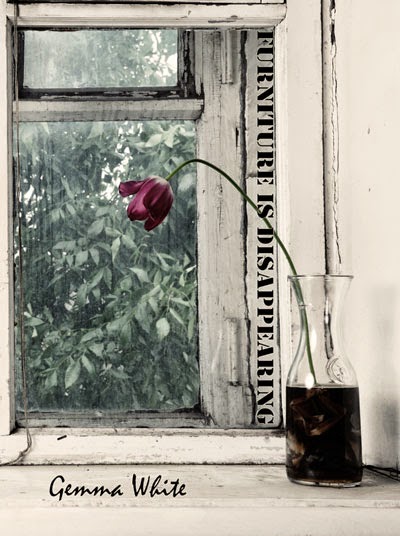 The Stars Like Sand: Australian Speculative Poetry, the anthology I co-edited with Tuesday Poet P.S. Cottier, had two launches in Australia in June 2014: one in Melbourne and one in Canberra. The Melbourne launch was a double launch with Gemma White's debut collection Furniture is Disappearing, which I've been reading and enjoying over the past few weeks.

There are many poems I like in this collection, but I think my favourite is "This Is Love" - indeed, I love the way it captures P. J. Harvey's swagger, power, sexuality and energy, both in general and in the titular song:


Gemma White's short, stabbing lines perfectly mirror the aggression of P. J.'s playing style. The poem pops (and rocks) as much as the song.

Gemma White lives in Melbourne, Australia. She is a poet, artist and musician.

Email ThisBlogThis!Share to TwitterShare to FacebookShare to Pinterest
Labels: "This Is Love", Furniture is Disappearing, Gemma White, P. J. Harvey

I enjoyed Gemma's poetry at the launch, although launches are always a tad anxious! I have since been reading her on-line in journals such as Verity La. This poem on P. J. Harvey is particularly compelling.

Power and swagger, yes! Thanks for this fun poem, Tim. And Gemma -- a new poet, for me.

This is definitely a poem with 'tude. I "like."

Thanks for the hump day smile - felt like was back at my Foo Fighter gig a few years ago.

Love this poem.thanks for sharing