A letter to Jim Harrison by Lindsay Pope

.
It may be of no surprise to you that the day
your book arrived the waxeyes at my feeder
were noisier, more nervous and more abundant
than usual. On the global face, I live on the
lower cheek of the world where the tears fall
and turn to ice. So you might not know these
little birds. They may have hitched a ride on
some seafaring boat and decided to stay. Or
perhaps they caught the tail of some cross-
Tasman wind.

Your book flew in and has roosted in my head.
I have lost contact with my former Anglican
god and pray several hours most days in my
garden.

The plants are forgiving and do not object too
much to the muck I spread around, or
even when I rest to blow cigarette smoke about
their ears. The best time to talk with them is
when the light changes in the evening. The
warm soil seems to reassure as the chill of night
begins to settle on their leaves.

This land has no snakes, which makes us a
nation fearful of them. I am learning to live
with my own.

Thanks for your poems. I like digging into their
soil. It is like harvesting new potatoes. Each
time you unearth a shaw you do not know
what the reward will be.

As I write, the waxeyes are drinking. The wind
has turned to the south, so I’ll head down the
garden path to pick a supper of beans.


Lindsay Pope lives in Nelson, New Zealand. He keeps his head down digging the soil, chopping wood, picking his supper, hanging out with his family, writing poems. He writes of a life lived on the lower cheek of the world in the path of a bitter wind that can blow in from the south. Of men like himself living domestic lives in the path of that wind, making poems and planting potatoes to shore themselves up ... and other men living more rugged, isolated lives buffeted by the natural world ... all intent on leaving a mark somehow.

The keeper of uninhabited Stephens Island is the subject of 'Island Flight', and a coastwatcher during the war is the subject of 'Outpost'. The latter was posted by Keith Westwater on Tuesday Poem last year, and in a Landfall online review by Robert McLean, who said it was one of the best poems he'd read by a New Zealand poet for some time. He talks of this poet's 'bruised, stoical, masculine voice', praising his brevity, and the way he weighs every syllable, measures each phrase.

I know Lindsay's work well, having edited and published his first full collection Headwinds, which came out last year as part of our Mākaro Press Submarine poetry series, and includes 'A letter to Jim Harrison' along with 'Outpost' and 'Island Flight'.  Such riches. 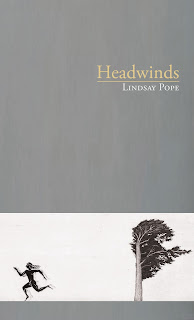 'A letter ...'  is from one poet to another, and writes of the pleasure another man's words bring. It feels like a letter in its shape, the way the thoughts come – all at once to start with, and then line by line, thought by thought – and the voice is casual and colloquial, speaking as if to a friend. But there is also a glimpse of the heightened fabular language of a poet in the way Lindsay introduces himself and the place he calls home: those tears falling to ice, plants with ears. It is this combination that nabs me as a reader (and a publisher), and I admire the economical and confident way Lindsay achieves it.

What I love about this poem is also what it says to me about poetry per se: the way it (deliciously) roosts in the head as we go about our business, and how the reading of it pulls something gleaming and new from the dark soil of our brains.

Jim Harrison, I discover, is not unlike Lindsay in the life he leads and what he writes about. Jim lives on a farm in Michigan, and the Poetry Foundation talks of his connection to rural landscapes and the way 'he often explores human and animal drives set against an unforgiving world'. I didn't discover this about Jim when editing Lindsay's book, although I really should have. The author photos speak volumes! These two ought to hang out together.

This week's editor Mary McCallum is a poet, a novelist and a publisher who lives in Wellington, New Zealand. As a writer, she has published a chapbook of poems, a novel The Blue (Penguin 2007) and a children's novel Dappled Annie and the Tigrish (Gecko Press 2014).  Her Mākaro Press publishes poetry, fiction and creative non-fiction. She founded Tuesday Poem with Claire Beynon.


In addition to today's feature be sure to check out the wonderful poems featured by the other Tuesday Poets, using our blog roll to the left of this posting.
Posted by Mary McCallum at 12:07 AM

This poem is so well crafted but yet very natural to read. It reminds me of the letters my grandmother wrote to my mother. Always full of what was going on in the garden. She was a farmer as well. I wish I had the letters now but somehow they got thrown away. So many fine lines in this poem. Thank you for sharing it Lindsay and thanks Mary for your insightful commentary.

Thanks for posting this, Mary. I wasn't familiar with Lindsay's work but now I think I need to seek some out.

Lindsay is a poet who writes straight from the heart of things, and invariably rewards time spent with his work. lets hope he publishes more.

Lindsay is a poet who writes straight from the heart of things, and invariably rewards time spent with his work. lets hope he publishes more.