The Fox by Bernadette Hall

The fox is a single red stroke that cuts across
the clearing. The colour seems to hang like smoke,
you can almost see where she has come from.
Her musk (though you can smell nothing)
is specific like a thumbprint on the air.
It isn’t raining but there’s a kind of wet
on your face, a stickiness of insect juices dropped.
The fox is rusty-dull, discreet, not radiant or hot
or pulsing. Not agitated. Not randy.
She is completely dream and intelligence
sliding through the wet grass, the stinging nettles,
the little brittle helmets of dry seed,
a flower or two, relics of the drizzly, petalled summer.
The lyric fox goes down to the creek
where dark and dankness will mask her scent
and the lovely rosette of her face.
She’ll be able to pause there, for a while, sip water
while the dogs swirl and bell in front of the Big House.

Reproduced on The Tuesday Poem with permission.

This week, I thought I'd do things a little differently and invite Bernadette to speak to her poem The Fox , which in 2009 was recognised as one of the Best New Zealand Poems of 2008, selected by Robyn Marsack, Director of the Scottish Poetry Library.

"The Rathcoola Estate, where I lived for six months in 2007, is situated in Donoughmore, a rural area in Co. Cork, about twenty five minutes drive from Blarney. Among the wonders there were the blue jays that came down to steal apples from the 200 year old apple trees in the orchard. And the foxes. I’ve long been fond of them, from Brer Fox to the silver foxes of the Arctic. I was desperate to see one.

One day when I was standing under huge oak and sycamores trees just beyond the stone walls that enclosed the orchard and not far from the creek, I saw the fox. She was surprisingly close. And I did experience a kind of deepening stillness, the words clearly in my memory from Ted Hughes’ ‘The Thought Fox’ which I had taught to so many classes over the years. Ireland had this way of offering me ‘for real’ many things which literature had already embedded in my imagination.

This fox was completely unfazed by my presence in her space. She had already judged me as being of good will, or at least harmless. I was relieved to see her. That same morning the hunt had gone through the estate, tracking along the creek with a great hullabaloo, the dogs and the men all in a frenzy. I identified with her somehow. I admired the way she kept on calmly going about her own business.  I wished her long life, good health and a safe journey.

In his poem ‘On Originality’ (1977) Bill Manhire wrote of poetry ‘This is my nest of weapons./ This is my lyrical foliage.’ In his essay, ‘Catholic with a small c’ published in ‘The Source of the Song’ (VUP, 1995), Andrew Johnston wrote ‘A lyric poem occupies a space that has somehow been charged with meaning (or at least a sense of meaningfulness) as if a vacuum had been crossed by a spark.’ So, a ‘lyric fox’ crosses a glade and it seems that all along she’s been talking to me about poetry." 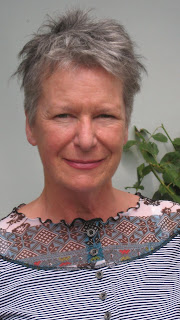 Bernadette Hall is best known for her poetry but also writes short fiction. She is recognised as one of New Zealand’s more distinctive poetic voices and was an an Artists in Antarctica Fellow in 2004, the 2006 Victoria University Writer in Residence and in 2007 held the Rathcoola Residency in Donoughmore, Ireland. Bernadette’s 2009 collection, The Lustre Jug, (Victoria University Press), was a finalist for the 2010 NZ Post Book Award for Poetry.

To date, she has published ten collections of poetry, the most recent being ‘Life & Customs’ (Victoria University Press 2013). Also in 2013, her edition of poems by the Christchurch writer, Lorna Staveley Anker, was published by Canterbury University Press. Titled ‘The Judas Tree’ it reveals Lorna Anker as New Zealand’s first woman war poet with memories of both World Wars. The Dunedin composer Anthony Ritchie used seven of Bernadette’s Stations of the Cross poems in a symphony which premiered in Christchurch on the 22nd of February 2014 as a memorial to those who died and those who have suffered as a result of the 2011 earthquake.

gotta say not only men ride to hunt

One of my favourite poems of all time!

Thank you for this post Helen and Bernadette. It is so beautifully written and has such attention to detail. Exquisite. and if I can borrow the phrase Bernadette borrowed in 'as if a vacuum had been crossed by a spark' that I think, applies to The Fox.