When the Sister Walks by Sarah Jane Barnett

as she steps over roots as thick as a boy’s wrist. She
is not at her best. When she left he gently pressed

his tattooed palm to the glass barrier. He said,
See ya, Sister. He made a joke – See you tomorrow.

He watched her face while she recited from her red-
edged bible. Finally, like a child, his head rested down.

At the lake she makes towards the witness tree,

she holds aside a low-hanging hickory, the seed-nut rattle
exciting a family of yellow-back wasps. They scatter

like bright marbles, afraid or maybe angry
she cries out, Oh – oh – and stumbles

away from their hide. They are sucked into an undulating
bubble of yellow and vibrate up into the trees.

They haven’t hurt her. It is nothing

but on her knees she says, Oh God, I am thankful
for you. She wipes a dirty finger across her cheek.

“When the Sister Walks” is one of a series of nine poems about death row executions in Texas. It appears in Sarah Jane Barnett's debut collection, A Man Runs into a Woman (Hue & Cry) which was launched on 10 August 2012 at the Michael Hirschfeld Gallery in Wellington. 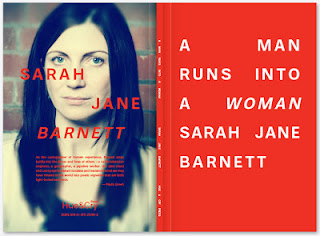 The poem first appeared in issue four of Hue & Cry Journal and most recently was posted by Sarah on her blog The Red Room which is linked to Tuesday Poem [see sidebar] and can be found here.

Another poem from the death row series was posted on Tuesday Poem recently via Helen Lowe's blog.

The series is a fascinating one - the poems are simple and nail sharp and continue to scrape and dig and prod long after you've read them. So back you go, and there they are -- inevitable, disturbing, moving every time.

Sarah says in her own post of 'When the Sister Walks',

In 2006 I wrote a poem in response to the hanging in the movie Capote, about the power of cinema, illusion, and self delusion. While looking for information about hanging, I found a website that had the last words and criminal reports of death row inmates. It may sound like the death row series is about execution, but that’s only true in passing.

I wrote the poems as a way to try and understand how something like a murder, and then the subsequent execution of the convicted person, could become a normalised event for the people involved – the police, prison wardens, execution technicians, clergy, the inmates and their family, and the family of the victims. Maybe it can’t.

I hope the poems try to reconcile, or at least interpret, the different stories told by the inmate’s last words and the police crime report. Maybe my poems are another story about the event.


A Man Runs into a Woman can be purchased from the Hue & Cry Press store. It's an impressive collection which challenges at every turn.

Poet Paula Green says of Sarah’s work: “As the cartographer of human experience, Sarah Jane Barnett steps boldly into the shoes and lives of others – a cable television engineer, a geographer, a pipeline worker. Her alert mind and canny eye for detail translate and transform what we may have missed in the world into poetic vignettes that are both light-footed and fresh.”

Sarah Jane Barnett is a PHD student and poet and mother of a delightful small boy. She has a Masters in Creative Writing from Wellington's IIML and is currently completing a creative writing PhD after being awarded a Massey Doctoral Scholatship. Her PhD combines both creative writing and research to investigate the difficulties of nature poetry.

Check out other Tuesday Poems here on the Tuesday Poem Hub. Just look to the sidebar on the left - if a post says 'Tuesday Poem' it's worth a read.

This week's editor Mary McCallum is a Tuesday Poem co-curator. She is a Wellington poet and author who teaches creative writing, writes reviews, works in a bookshop and organises book events. Her blog is www.mary-mccallum.blogspot.com.

Email ThisBlogThis!Share to TwitterShare to FacebookShare to Pinterest
Labels: a man runs into a woman, sarah jane barnett, the red room, when the sister walks

This is a beautiful poem, Mary - so simple and direct. It moved me before I knew the whole story. It's the small details, isn't it? The tattooed palm, the witness tree and those wasps and then her small prayer and the grubby mark...just beautiful!

I wholeheartedly agree with Catty - it is beautiful with or without the accompanying narrative details. I find the small movements that thread through the poem particularly beautiful; almost like stills. The image of the yellow-back wasps scattering like marbles? Just perfect. Thanks Mary and Sarah!

It's a great book. I have a signed copy and I urge you to get yourself a copy. You won't regret it. Poems you can read and re-read. Very rich poems.

I'm so glad I came to this poem this morning. The details linger; the images resonate in a quiet, steady way. There are so many words to admire here: roots as thick as a boy's wrist, those wasps scattering, and that last dirty finger wiped across her face. Such a sparse, tender story here in these lines. I am thankful for the commentary as well. So interesting. A must for my Xmas list, I think... I look forward to the rest of the poems in this collection.