Someone forgot to tell the fish by Hal Judge

I love this poem: a slippery little thing that evades easy categorisation.  There is an ecological awareness here, but it does not drape itself in simple robes of green.  There is a gender awareness, that refuses to simply shout about anything.  There are drugs and sex ... and dolphins.  And peculiarly badly-informed fish.  Perhaps they, like all of us, are subject to killer sharks, in one form or another? But killer dolphins that need disarming?  Flipper of a last line that seems to refer back to the title of the poem. 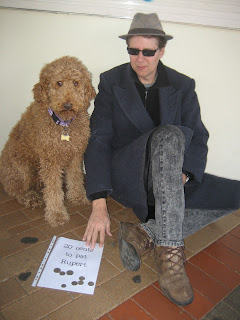 Australian poet Hal Judge cannot be described as a fixture in the Canberra poetry community, as he is far too mobile for that.  He writes (obviously) suggestive and ambiguous poetry.  He performs such poetry very well.  He organises so many things for other poets, and is very generous with his time.  For instance, he agreed to launch a book of poems I had written, without really knowing me.

Here is how he describes himself (when asked to do so for this blog entry):

Hal Judge is a versatile writer—poet, spoken word performer, playwright, screenwriter and librettist.  Having lived and worked in Canberra most of his life, Hal is imbued with the city’s culture, politics and literature. Six of his plays have been staged. His poems have been published in over 30 literary journals.

His award-winning poetry collection Someone Forgot to Tell the Fish is available on Amazon’s Kindle. He has featured as a guest writer at many writers’ festivals in Australia and Indonesia. He has run writing workshops for students, soldiers, prisoners and homeless people.

Hal is a person, it seems to me, who is willing to take risks.  Apart from daring to write the line, 'Someone forgot to put in the thingy', I have heard him read a poem in Bahasa Indonesian, for example, and he is not a native speaker of that language.  He is willing to cross over between art forms; a recent reading at Manning Clark House here in Canberra, for example, featured music and a live dancer to a poem about a snail...

As a poet, it is a real joy to meet other poets who are experimental, generous and just plain good at what they do.

Chase up his work if you can.  It's well worth the price of a can of worms. And make like an educated fish, and gorge yourself on poems.  World Poetry Day occurs this week, you know.

This week's editor, P.S. Cottier aka Penelope Cottier, is also from Canberra. She has worked as a lawyer, university tutor, union organiser and a tea lady. She wrote a PhD on animals in the works of Charles Dickens. Her most recent book is a suite of poems called Selection Criteria for Death. She blogs on pscottier.com.

I love it. I can imagine it read aloud. So much humour in it and so many surprises. I love its playfulness. Thanks for posting, Penelope.

I enjoyed the humour in it.

Thanks Penny for introducing me to Hal. The poem is fresh, quirky and full of twists and smiles.

I love "list poems". Goldbarth's library, for instance. Many good lines here, many awesome ones.

That's very good - the nearest equivalent in prose I can think of is Donald Barthelme in the way the poem keeps eluding categories. Plus, major bonus points for the reference to the Voight-Kampff test!

Gosh, the accumulation becomes really overpowering and you feel yourself wanting to remember, yes? Really enjoyed this - it's so playful and vibrant. Thanks heaps, Penelope!

I love coming here and discovering new poets. Did not know Hal Judge but will be sure to look for more of him. I can well imagine the delivery of this -- in various rhythms, fast-slow-fast... Such variety in this piece. I like the way he so smoothly juxtaposes very serious Big Topics (NASA, Capitalism, Miranda) with small things that make us flawed and complicated and even hilarious humans (...forgot to flush... forgot to tell her he was gay...). Just love this! Will pass this one around to people who think they don't even *like* poetry!

I would LOVE to hear this read aloud. What a marvelous and original piece! Thanks for posting.

i love coming here and discovering new poets. Did not know Hal Judge but will be sure to look for more of him.

I'm so happy that visit this site i'm already bookmark this site i come back again . thank for great post.


Thanks for your nice articate
plastic business cards
,

I like the helpful info you provide in your Poems. I will bookmark your blog and check again here regularly
Visits My sites>Meditation uk