If you should bury me,
as I have requested
with my hands clasped,
bury me wearing this bird
on a fine chain,

if my grave
should be uncovered
in a thousand years,
a wise man might say

Here we have
the bones of an elderly woman,
well, she would have been elderly
in her day.

From the evidence
of the spinal column, we can deduce
she carried heavy loads & the bones
of the hands indicate hard labour.

There is advanced
degeneration of the phalanges.
Early writings suggest
this was a common affliction.

But what is
of peculiar interest in this grave
is the small wrought bird.
It is silver & beautifully worked.

It has fallen into the chest cavity
but I think we can safely imagine
it was placed between her hands –
wings to carry a soul into eternity?

My gap eyes & unhinged jaw
will not reveal the day we bought it;
the way you wrapped it in my hand
& kissed my fingers closed;
the way we made love
with the silver chain around my neck

wings pressed between us.

Published with the permission of Steele Roberts Publishers

I thought that this week I would like to honour one of the stalwarts of Christchurch's, Canterbury's and New Zealand's poetry scenes, Helen Bascand, who recently passed away on 27 April 2015.

I hope that no readers will think my choice of poem by Helen morbid, given her recent death, but I think this poem is beautiful and it has a very hopeful thread running through it. It speaks of a life well led, full and pleasurable, rich and robust with many pleasant memories of love and beauty. I think this poem captures Helen's voice so well because her poetry was laden with beauty and grace.

I have often seen and heard Helen read her work at the Canterbury Poetry Collective's regular poetry seasons and her work was always received with great appreciation.

I cannot profess to have known Helen well, but she always struck me as a gracious, elegant person who knew her own mind and was a perceptive observer of human nature and the natural world as well. She took great pride in crafting writing that would stand the test of time and weather any passing literary fashions. She was renown both here and overseas as a mistress of the haiku form.

Her absence will be keenly felt at future Canterbury Poetry Collective readings and her passing will rend a tear in the fabric of contemporary New Zealand poetry. 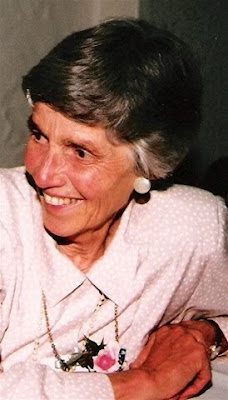 Helen wrote poetry for many years, but applied herself more intensively to the craft from the 1980s onward. In the 1990s, Helen developed a keen interest in writing haiku and she won the haiku section of the New Zealand Poetry Society International Poetry Competition in 2000. Her work appears in listening to the rain, an anthology of haiku and haibun published in 2002.

Her poetry has also appeared in The Press, Bravado, JAAM, Kokako, The Listener, Takahe, SPIN, Printout and in overseas periodicals such as Famous Reporter and Poetrix (Australia), Still (England) and Frogpond (USA). Her work has also appeared in many anthologies including Voiceprints 2; Throwing the Words; Half Light and Half Wind; Something between breaths; All Together Now; Big Sky; My Garden, My Paradise and the Canadian anthology, Rose Haiku for Flower Lovers.

Helen published two collections of her poetry: Windows on the Morning Side (Sudden Valley Press, 2001) and Into the Vanishing Point (Steele Roberts Publishers, 2007).

Helen was also closely associated with The Small White Teapot Haiku Group for many years.

RIP Helen Bascand. I hope you were buried with your bird on a silver chain.

Goodness, this is so beautiful. Delicate, bold, powerful. I love the way the whole is held together by that delicate bird on a chain. Can't say enough how much this moves me. Thanks so much, Andrew, and may Helen rest peacefully.

Like so much of Helen Bascand's work, this is a wonderful poem, and I am so pleased to see it featured here today.

May I make a correction, however: Helen published three books of poetry. The third was "Nautilus", 2013 from Caxton Press.

Nice to know that, Helen Lowe. When I was researching Helen Bascand's bio for this post, only the two titles ever showed up. I found no mention of "Nautilus" and it is obviously the most recent collection too.

It is also strange that the Christchurch City Libraries don't hold a copy of "Nautilus" in their Aotearoa/NZ Reference Collection either.

Thank you for this. We should all be so clearly ready to face the end of life. Such grace, and yes, such a sense of a life well-lived.

Absolutely beautiful and full of humour and love. I wish I could tell her in person how much we all loved it! Thanks for publishing it Andrew.