A whimper after the bang by Emily Manger

Tenderness scorched from the planet
but she's got it, baby
strong as the cockroach and faded as a fable
she chews preserved meat open-mouthed
and when she declares
around the pride of survival
that she used to be a vegetarian
you can almost see
eyelashes gentle as tattered lace
nobody's beautiful
but in the arctic solitude of a crumpled climate
she slings that shotgun over her shoulder
like christmas morning
lukewarm sunlight chokes the doorway
each day a cavernous fairytale
and remnants sit
collecting bitter laughter in cracked mugs
unlike the rest
she doesn't assemble the toxic ornaments
of when when meant more than then
and now
silhouetted beside
anguished vegetation
she can stare for hours
wears vigilance like lingerie
the shivering horizon is abashed by her bleak gaze
she's a much better shot than you
you remember the first time
you felt the kick of the revolver
back then, there was plenty of clean water
but when the snarling finally stopped
you stood ankle-deep in a wave of deafening thirst
thirst for her voice
telling you you should have used the other bullet.

from The Stars Like Sand: Australian Speculative Poetry (IP, 2014), ed. Tim Jones and P.S. Cottier.
Reprinted here with the kind permission of the poet and the publisher. 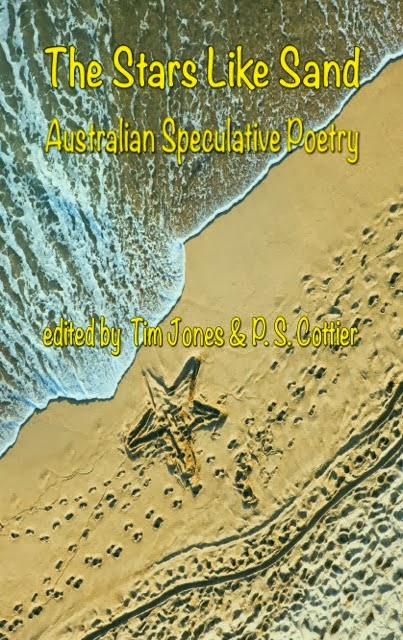 In 2011, I guest-edited an Australia/New Zealand issue of the Science Fiction Poetry Association's online journal Eye to the Telescope. Emily Manger submitted 'A whimper after the bang' for this issue, and I was delighted to be able to include it. Subsequently, I was equally pleased that my fellow Tuesday Poet P.S. Cottier and I had the opportunity to include it in the anthology we have recently co-edited, The Stars Like Sand: Australian Speculative Poetry.

What I like most about this poem is its swagger. Most post-apocalyptic poems are, believe it or not, something of a downer, but - at least on the surface - the protagonist of this poem is full of vim and vigour, tough as biltong, a kickass predator perfectly adapted to her environment. The toughness of the character is mirrored by the toughness of the poem, a landscape of spiky lines.

Look a little closer, though, and you can see the remnants of the self the protagonist has been forced to leave behind peeking through those almost-visible eyelashes. If the poem was all swagger, its terse confidence would still be bracing: but those tantalising hints of a former life make this a poem I have been happy to return to again and again.

Emily Manger: While studying, Emily Manger wrote poetry as a treasured distraction from the academic rigour of psychology. Now that her thesis has been submitted, her poetic ponderings are more post-posterous than ever. She and her identical twin Bronwen can be found regularly and joyously listening and performing around Melbourne's spoken word scene.

You can watch Emily and Bronwen Manger read a number of Emily Manger's short poems.

This week's editor is Tim Jones, who in addition to co-editing The Stars Like Sand with P.S. Cottier, is author of books including poetry collection Men Briefly Explained (IP, 2011) and short story collection Transported (Random House, 2008). With Mark Pirie, he co-edited Voyagers: Science Fiction Poetry from New Zealand (IP, 2009).

Email ThisBlogThis!Share to TwitterShare to FacebookShare to Pinterest
Labels: A whimper after the bang, Emily Manger, The Stars Like Sand, tuesday poem

A strong environmental message -- thanks for posting, Tim.

Hell of a poem, Emily. Fantastic imagery and in no way ordinary - my requisite trait in a poem. Congrats on this, keep 'em coming. M

Thanks, Helen and M - I'm glad to know you both enjoyed it!

I love the Sergio Leone feeling in this poem...the good, the bad and the thirsty.

I really like the present-day tone alongside the gentle remembrance of a past faded -- those
"eyelashes gentle as tattered lace".

A complex and confident poem, yes. Thanks for sharing, Tim!

Yes, great poem. I love that line: "strong as the cockroach and faded as a fable".

I love the style of poetry you've used. Thanks for posting it.