I carried the lamb in a sack on my horse
the tongue hanging grey and limp.
It’s buggered, said Dad, throw it in the creek.
The creek leaped, dimpled. Small bubbles
whirled, it rumpled where I was looking
the water shadowed half-blue-black

deep just there with duckweed floating out
the yards behind all noise, the cattle swirling
up air swelled with dust and bellowing.
Flies lighted on and off the rails.
I took the lamb and kneeled in the pudgy mud
both hands under it, under the water,

laid it carefully into the shocked cold.
It hardly struggled, there was so little left.
Put the bloody thing out of its misery
I heard in my head as I pushed it under
and the water shuddered.
Get the hell out of that he yelled at my back

you macabre little bastard!
It might have been ghoulish, he was good with words.
The yards were sweating hot
Dad wiped his hatband, the sack smelling
of stiff dry flax, I wiped my nose
my hand all mud and numb.

The birds hummed. In rain, in wind
I go out all hours on my lambing beat
he’s the shadow of me, always riding beside me.
Let it go he said, quietly. And I let it go floating
it bobbed and the sun caught the eye, closing.
Shush, shush, said the creek.

from 'Horse with Hat' (Victoria University Press, 2014)
Reprinted here with the kind permission of the poet.
Editor: Janis Freegard. 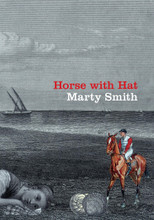 This is a poem that really stayed with me, not just because of the drowning of the dying lamb, but because of the expertly sketched relationship between father and daughter. Then there is the surprising language: a creek that dimples and rumples, the "pudgy mud". It stands alone perfectly, but is also part of the bigger family story that Marty tells in her excellent Horse with Hat.

Marty says: 'This is an exercise poem from the distance learning IWP programme I did with marvellous Iowa tutor Margaret Ross. The idea was to try to burrow down into memory by free writing - wide-ranging, jumbled, and fragmentary- to try and snag some memories.  We were looking at poems by Lynn Hejinian by way of example. I suppose the rubbish tip of your brain throws up high voltage points in memory, and it started straight off with the little flowers floating in the creek.
I’m pleased about the image of my shadow as my father, because it hooks into part of a larger exploration of why humans persist in believing in paternalistic systems of faith (and what cultural shift is doing to that belief). I also just really like the visual idea.'

On Marty's website, you can scroll down to a most interesting audio recording of Agnus Dei, in collaboration with Maude Morris, an analysis of the poem by one of Marty's students and footage of Marty riding a gallop at Newmarket.

Horse with Hat (Victoria University Press) is Marty Smith's debut collection. It recently won the NZSA Best First Book for Poetry award at the 2014 New Zealand Post Book Awards and is a finalist for the main Poetry award. The manuscript for Horse with Hat was also short-listed for the 2011 Kathleen Grattan Award. Agnus Dei was a place-getter in the 2014 Joy Harjo Poetry Prize (US), was short-listed for the Bridport Prize and has featured on a Phantom Billstickers poster. Marty describes the book as a conversation with her father, who loved books and ideas but found it hard to breach his habitual silence.

Horse with Hat also features a series of marvellous collages by Brendan O'Brien, made from engravings in a bible similar to the Smith Family Bible. The coloured images are from Garth Smith's cigarette card collection. As in the poems, figures in the collages appear, disappear, then make another entrance in a different configuration. 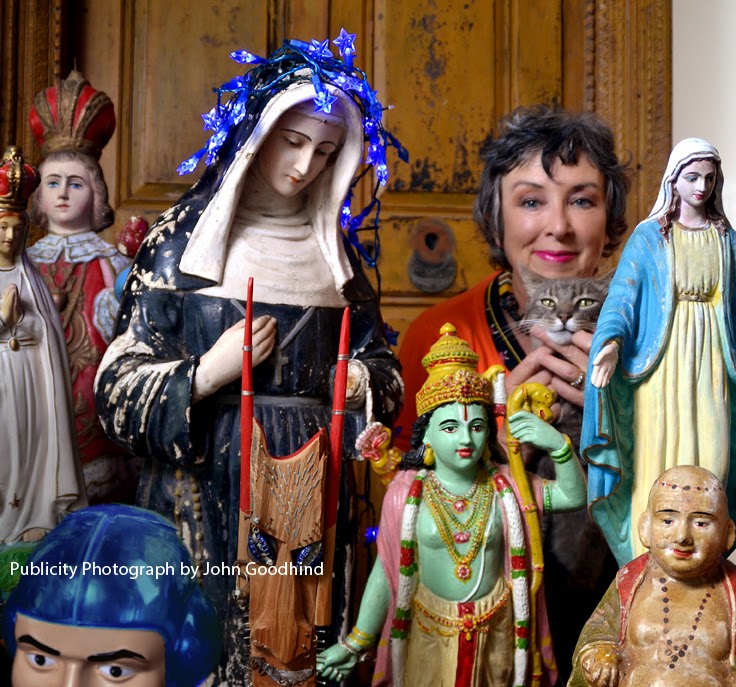 Marty Smith describes herself as a teacher who still keeps a secret longing to do one more round of a racecourse on a quiet horse. She worked as a track-work rider in New Zealand and in Newmarket, England, and her next project is an ethnography of the racing world.

This week's editor is Janis Freegard, author of The Continuing Adventures of Alice Spider (Anomalous Press) and Kingdom Animalia: the Escapades of Linnaeus (Auckland University Press).
Posted by Janis at 11:55 PM

Great poem, with the baptism imagery and the colloquial language.

I read from the top, and assumed that the poem featured a male child or younger person, until I read the commentary.

A fantastic poem with imagery that sits in your head long after reading. As you say, Janis, Marty does some fabulous things with language, and the story itself has a raw, fresh quality like just-sawn wood -- and there's something about being right at the edge of feeling: the horror of the lamb in the water, and beside it in its own pool the watching of the father, now an absence/shadow...Thanks so much, Janis and Marty.

Yes, I too assumed it was a father and son. It is such a visceral poem with a surprisingly lullaby-like final line - that soothing 'shush, shush'. Just stunning. Thanks, Janis & Marty!

this is awasome with a better explanation