you know we all tell stories
in coffee-rooms and corridors
ironically envious of your eccentricity
how once you said:
‘Which way was I going?
Ah, thank you, that way
– then I have had lunch.’
but Polonius
you are so far out
you’re on your own
way back

though it’s true you stalk dead minotaurs
in labyrinths where we lack the clue
and Hamlet is dead, Polonius,
and Ophelia too
and maybe you’ll never write
all those poems you promised to
you did once live in Elsinore
and for that
we envy you 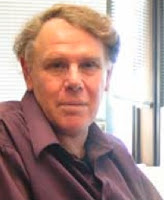 ‘Polonius: Old Poet’ appeared in Nothing To Declare (HeadworX, 1998). I like the picture it paints of an aged poet, George Fraser, who in turn has likened himself to Hamlet’s Polonius. I also like the layered references to Hamlet and the respectful tone of the poem.

The poem is the first of a suite entitled Three Poems for George Fraser. Harry prefaced the poems with the following note:

‘GS Fraser, the Scottish poet and critic died in 1980. In one of his last poems ‘Older’, he cast himself as a kind of latter-day Polonius figure. ‘Polonius: Old Poet’ (written while George was still alive) was intended as a reply to ‘Older’. The other two poems were written shortly after his death.’

Harry’s poem is posted on Tuesday Poem with his permission.

Keith Westwater is a poet from Welington, New Zealand, whose debut prize-winning collection Tongues of Ash was recently published by Brisbane-based Interactive Publications. Visit Keith Westwater's Writing and the other Tuesday Poets in our sidebar.
Posted by Keith Westwater at 12:01 AM 4 comments:

Born and educated in Palmerston North, and now teaching in Auckland, Iain Britton is a prolific poet of work with (what I consider) a philosophical-real world engagement. His debut collection, Hauled Head First Into A Leviathan, was published by the esteemed Cinnamon Press in 2008, followed by Liquefaction (Interactive Publications, 2009), Cravings (Oystercatcher Press, 2009) and Punctuated Experimental (Kilmog Press, 2010).

Iain's work is published with permission.

Orchid Tierney is a New Zealand poet who runs Rem Magazine: a NZ Journal of Experimental Writing, and was involved with the Mapping Me anthology of women's writing, although her primary focus at the moment is trying to secure a placement in an MA programme. Visit her at www.orchidtierney.com.


Please check out the sidebar for other offerings from our Tuesday Poets.

There's a stone wall around this heart.
A moat, a marsh, various misleading traps.
The finest model of modern man
I've become. If you wish to touch me

you'll need the skills to siege a castle,

use the backs of alligators as a bridge
to cross the moat. If you want my love
you'll need to navigate past towers. Do this
and perhaps

I'll let you know my name.

My father gave me a shovel at twelve,
and I've been burying my emotions ever since.
So if you leap over the holes, fill them as fast
as they're made, maybe you and I
could hold hands.

I am man, mute of all emotion.

I am emotionless, hoping this stone wall won't erode in this forum of openness. I take the truth and start choking it, coping with the slope that leads to a lone abyss. I'd rather have my throat slit than phone home and be open with my folks and shit. I'm speaking the truth. Every man will start quoting it, and every woman will nod her head because they've all grown with it. These broken lips are a growing cyst reflecting the neglected cancer, constantly provoking it. And you'd best believe that I know that it's

the WHOLE damn reason THIS fucking MOAT EXISTS.
The modern man wears his suit like a protective shield
assassinating emotions 'til he forgets to feel.
And yes, [raise fist] this is a weapon I wield.

Men use it to stop
any relationship from getting real.
If those who know me could actually get to know me
I'd deal with the blows dealt then left to fade slowly.

I am man, mute of all emotion.
I'd like to think I've done rather well. 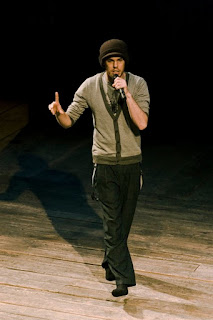 David's poem is used with permission. Note stanza 9 'I am emotionless...' is supposed to be one long line, but we're not wide enough for that, so five lines it is.


After you've enjoyed David's poem here at the TP hub - visit the sidebar where up to 30 poets from NZ, Australian, the UK and US post poems by themselves or other poets they admire.
Posted by Mary McCallum at 12:01 AM 1 comment:

The books are all commuters pressed together on a crowded five o’clock train. Every commuter has a bird, trying to beat its wings, inside their chest. No one talks. No one talks about the furled flock of story harboured by the hard spine, the clamouring dusk chorus, suppressed inside the travelling body. Which hardbacks will open up, tonight? Releasing a piteousness of song, a murmuration, an exaltation, a flight.

This poem is from Joan's debut book of poetry, The Same As Yes, which will be launched on November 17. The whole collection is a series of conversations, beautiful and strange. Everyday things take on their own life, if only we can stop and notice them. I love these mysterious and strange little gems.
Joan Fleming won the Biggs Poetry Prize in 2007, and her work has appeared in Landfall, the Listener, Sport, Turbine and The Best of Best New Zealand Poems. She and US poet Emily Toder paired up to produce a chapbook which featured on Tuesday Poem last year. She lives and works between Wellington and Golden Bay.
Joan says:


The poem came about because I have a beautiful, huge, hardback OED thesaurus, and while I hardly ever use it for it's proper purpose (that is, finding better words than the ones I usually choose), I love to read the middle section of the thesaurus which has all kinds of lists: lists of every different sort of hat, lists of the names of diseases, lists of dances, lists of crimes, lists of architectural terms.

One of the lists is a list of the collective nouns for birds. So, that list, combined with an impulse to imagine the stacked books in a bookshelf as something else entirely, is how this poem was born.


Helen Heath is the editor of this week's Tuesday Poem. Helen's book of poetry, Graft, will be published in May 2012 by VUP. You can read more at her website helenheath.com . Sadly, Helen is leaving Tuesday Poem to go on sabbatical for a little while. She's been an enthusiastic Tuesday Poet since we began in April 2010 - posting all sorts of marvellous poets and poems -- and with Claire Beynon's image, she created our Quill logo. Helen is also so reassuring with her advice on blogging.  We'll miss you, Helen, come back soon.
Have a look to your right at the sidebar to see all the other wonderful Tuesday Poems this week.
Posted by Helen Heath at 8:09 PM 6 comments:


If things tarnish allegory
if the picture puzzle becomes
commodity, a fruitful but useless
woman marking her birthday
obsessively on friends’ calendars, then

what? You want to object to objects;
a shy child, retire hurt to the countryside
as if it was tabula rasa. The dark –
that’s centuries of varnish.
Get your knife ready.


You think the root is silent
but it grumbles: holding the bank,
that’s harder than dancing
like the leaf – even when frost is expected
and that leaf wants to trade places, to

drop the non-sense of God’s love
which warms beyond knowledge. The leaf
falls silent before the root’s warning:
Yours is the light but mine is the glory…
Cold, the farmer starts his chainsaw.


The wasp that knocks on your windowpane
represented conscience for a younger man –
now it demonstrates partial knowledge,
the limits of will. It is also a wasp
being a wasp.

The wasp never expected to be born
either. When you open
the window it does not come
in, redoubling its efforts to crack
the mystery of what’s clear.


Everything gets burnt: picture perfect
landscape and the figure that moves
across, from left to right
if you’re watching – but you’re not
because you, too, burn

like the shy child who tries to hide,
the wasp that wants to come
through the glass clarified by a kiln
when you were little
and things appeared to be… symbols.


Love isn’t so much an angel as the stump
where a wing used to be. Come middle age
it’s a curiosity, abandoned
like the tractor in a fallow field,
where there were tracks… forget-me-nots.

What confuses you is the clarity of loss.
So many abstracts as you
twist your ankle in a rut, swearing
there is a God. Why are your shoulders
sore? You thought the root was silent.


If allegory tarnishes things
if a puzzle’s the right picture, then
it’s child’s play. Why try to name it?
A name is neither transparent nor opaque –
it clears up nothing.

Born in Christchurch in 1959, David Howard co-founded Takahe magazine (1989) and the Canterbury Poets Collective (1990). He spent his professional life as a pyrotechnics supervisor whose clients included the All Blacks, Janet Jackson and Metallica. In 2003 he retired to Purakanui in order to write.

David was the inaugural recipient of the New Zealand Society of Authors Mid-Career Writer's Award (2009) for a body of poetry that has been translated into Dutch, German, Italian, Slovene and Spanish. In September 2011 he was joint winner of the poetry section of the international literary competition to mark the launching of the USP Press by the University of the South Pacific.

Country Life appears in David's new collection the incomplete poems, published by Cold Hub Press, which will be launched in Christchurch on Wednesday November 2nd at 5.30 pm at the CPIT Students Association Hall, 5 Madras St. More of his poems here.

This week's Tuesday Poem editor, Catherine Fitchett,  lives in Christchurch NZ.  She wrote poems in high school but studied chemistry at university which led to several careers as a forensic scientist/toxicologist, and work in accounting. She returned to writing in 1999 and is the member of a poetry group, The Poetry Chooks, which has published The Chook Book, and Flap, The Chook Book 2. Vist her blog Still Standing on her Head.

When you've got to grips with Country Life, there are more poems waiting in the sidebar where up to 30 Tuesday Poets post poems by themselves or other poets they admire.
Posted by Catherine at 12:01 AM 2 comments: