A Birthday Poem by Kendrick Smithyman

rather small goat was kneedeep in a paddock.
The paddock entirely was fescue/rye/and clover green.
Also, bushes were there, which are good
for nibbling. Also, for hiding behind.
This small goat was white, like nothing but promise.
She didn't always come when they called her
home, she had her reasons. Families
are like that. Sometimes she came - not announced
through a fence or over a fence - just to see
what was going on. She was, after all, family.
So, I make her, this little ivory would-be nanny,
stand out in a falling dark, twitching her ears,
pricking her lively scut,
at sounds of party
and whether or no she is
at the table she's with them otherwise,
wishing most birthday wishes and that
all manner of things (as surely they will) go well.

This poem is found within the highly recommended pages of Kendrick Smithyman's Selected Poems, published in 1989 by Auckland University Press. It is reprinted here with the kind permission of the copyright holder, Margaret Edgcumbe.
Editor: Elizabeth Welsh.
I first encountered New Zealand poet Kendrick Smithyman's writing five years ago when I enrolled in a 'New Zealand poetry' paper, taught by Peter Simpson, during my Masters at Auckland University. I had no clue who Kendrick Smithyman was, or what his poetry was like, but I did that thing that students often do (and which, incidentally, has driven me crazy since, teaching at University myself) - I liked the sound of it and so committed six months of my year and my degree to learning about him.

It feels rather foolish now to admit such a 'stumbling upon' an author, but I often find, particularly with poets, that this haphazard way is often the best. I found a poet that I loved, such is the way. I spent weeks in the special collections part of the Auckland University library looking over Smithyman's visions and revisions of his work (constant editor and tinker, that he was), intrigued by his dedication and constant belief in Paul Valery's dictum, 'A poem is never finished; it is only abandoned'.
As you can imagine, it took me some time to decide which poem to post this week as the lucky Editor of the Tuesday Poem hub. I was sorely tempted to post 'Communicating' or 'Walk Past Those Houses on a Sunday Morning' - both iconic pieces of New Zealand verse - but instead I opted for a slightly less well known, but, to me, infinitely endearing poem about birthdays and a goat. I must admit, I had a slightly selfish aim in mind, given that this lucky Tuesday is my birthday.
Please click on this link provided and visit the incredible online resource of Kendrick Smithyman's works - Smithyman Online. It boasts the Collected Works 1943-1995, edited and with notes from Margaret Edgcumbe and Peter Simpson, as well as a chronology, reviews, etc. It is a veritable treasure trove!
Elizabeth Welsh the editor of this week's Tuesday Poem. Elizabeth is an academic editor, Katherine Mansfield scholar and poet. For more information about her, please visit her blog.


For more Tuesday Poems, please check out the other blogs in the sidebar where Tuesday Poets post poems by others they admire or poems by themselves. Either way, it's a treasure trove.
Posted by Elizabeth Welsh at 12:01 AM 6 comments:

The Force of Things by Majella Cullinane

I have tapped the arch of the scapula
where the skin dips
to the breastbone.


Your breaths
are the quivering feathers
of birds
rustling eucalyptus, macrocarpa, pine.


It’s a question of listening:

the guttural call of your dreams
a kind of offering
I nestle in the cup of my hands.


I snatch the ghost of things
you cannot see.

It is this that frightens you.


The wind holds its blade
against the night’s throat,
but like you, it too will soon forget –

the taste of my lips
buoyed in a gully of dreams.


"The Force of Things" first appeared in Takake 71, ed. Siobhan Harvey, and was published in Majella Cullinane's collection Guarding the Flame (Salmon Publishing 2011). It is reproduced here by permission of the author. 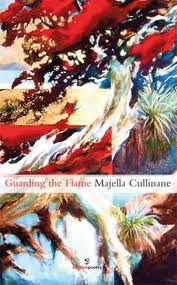 
Majella Cullinane is an Irish poet who has recently emigrated to New Zealand. I heard her read her poetry at September's New Zealand Poetry Society meeting in Wellington, enjoyed hearing her poems very much, bought her debut collection Guarding the Flame, and am very pleased I did.

There are a lot of fine poems in this book, and I had a hard time deciding which of them to ask Majella for permission to publish as a Tuesday Poem, but I kept coming back to "The Force of Things". I like the way it takes the images of the natural world that recur through the collection and makes them both intimate and ominous. Restlessness without and restlessness within...

The poems in Guarding the Flame cover the poet's old life in Ireland, her new life in New Zealand, and the transition between the two. It's well worth reading if you like Irish poetry or New Zealand poetry - or if you just like poetry.

Tim Jones is the editor of this week's Tuesday Poem. Tim is a poet, author and editor who lives in Wellington, New Zealand, and won the NZSA Janet Frame Memorial Award for Literature in 2010. He is about to embark on a book tour with Keith Westwater, to launch Tim's new collection Men Briefly Explained and Keith's debut collection Tongues of Ash. This week, one of Tim's poems from Men Briefly Explained is Mary McCallum's Tuesday Poem, and next week Tuesday Poet Helen Lowe will post one on her blog.


Do check out the other Tuesday Poets in the sidebar.
Posted by Tim Jones at 12:01 AM No comments:

from The Cheese and Onion Sandwich and Other New Zealand Icons (Seraph Press, 2011)

With a New Zealand mother and an Australian father, award-winning writer Vivienne Plumb has one foot on either side of the ditch. She's one of literature's all-rounders. As well as six previous collections of poetry, she has written plays, short fiction and a novel. Her recent play The Cape, which has been performed throughout New Zealand, has been translated into Polish and published in Warsaw.
I was delighted to hear that Helen Rickerby's Seraph Press is publishing Vivienne Plumb's brand new collection (The Cheese and Onion Sandwich and Other New Zealand Icons). I'm a big fan of Vivienne's work, particularly her prose poems, and this collection is all prose poems. Vivienne celebrates and satirises such New Zealand icons as ferry crossings, sly grogging, crockpots, whitebait, weather, gambling, tramping, motels and (of course!) cheese and onion sandwiches.
The poem I've chosen (and it was difficult to choose from so many that stood out) is a great mix of the lyrical ("the dust particles refuse to settle all morning they dance above the harbour making it look as if there are fires out at sea"), the satirical ("probably a security intelligence officer") and the political. New Zealand is still dealing with the aftermath of its so-called "anti-terror raids", with several people still awaiting trial and a new "search and surveillance" bill recently introduced into parliament.

I was also drawn to this poem because I have a personal connection to the house at 128 Abel Smith St - a friend used to live there years ago, before it became an anarchist/community house. It's a lovely old place and I'm pleased to see it's still being used and appreciated.

Janis Freegard is this week's TP editor. Based in Wellington, New Zealand, her poetry is widely published including at the Tuesday Poem hub and the US-based Anomalous Press. Her collection Kingdom Animalia: the Escapades of Linnaeus (Auckland University Press) was released earlier this year.
For more Tuesday Poems, please follow the links in the side-bar to the right.
Posted by Janis at 12:01 AM 5 comments:

Aileen Kelly was born in England and graduated from Cambridge. She has lived in Melbourne since 1962 where she has worked as an adult educator. Her first collection, Coming Up for Light, 1994, won the Mary Gilmore Award for best Australian first book of poetry and was shortlisted for both the Anne Elder and Victorian Premier's awards.

I've posted about Aileen Kelly's work and my personal and professional friendship with Aileen before on my own blog, so I won't repeat what I wrote there.  I do want to say that I believe Aileen Kelly to be an excellent poet whose work has sadly been under-valued in Australia. I have some theories about this, but I'm more interested in hearing what people think of this poem.

What I love: the rhythms of the poem which create the dialogue between the speaker and the silent 'You', the ambiguity of the 'You' to whom the poem is addressed, the pungent vernacular and the tension this creates with the poem's content. There's nothing predictable about this poem. Over to you - what do you think?

This week's editor Catherine Bateson is a poet and children's writer who lives in the hills outside Melbourne. You can find more information about her on her webpage.


For more Tuesday Poems, please follow the links in the side-bar to the right of this page.
Posted by Cattyrox at 3:11 PM 10 comments:

Due to sickness in our ranks (and a server issue), there was no official Tuesday Poem this week - at first - so I posted a link to something in our sidebar: a dynamic, thought-provoking, 'webcomic' of a poem by one of our Tuesday Poets - Renee Liang - blended with the work of comic artist Dylan Horrocks. The remix is by Allan Xia, and it won the literature award in the just-announced mix and mash competition.


This week's editor Catherine Bateson managed to post 'Curtains' after all but you may as well check out 'Crossed Cultures' anyway, it's rather good.