Job. He wrote, “Why did I not perish at birth?”
“Why is light given to those in misery, and life to the bitter
of soul?”
and I ask why He gave me breath and life.
“But man dies and is laid low”
“At least there is hope for a tree”

Tell me about light and life.
The same light that hides
That light seen but not touched
and like punching under water
leaves a thirst.
That life which leaves me, my soul back broke. Like I’m struck
at the ankle - left inch deep, unmoving, maybe shaking
shuddering. and then you can kick me.

Jesus told me his burden was light.

As he hung from it, hands pierced, thorns through the scalp,
he tells Matthew “my yoke is easy and my burden is light”.

Someone else told me it’s hard to keep your head up in the
rain.
You’re my rain and I’m looking for a thumb because my jaw is
heavy.
Heavy with your eyes,
But heavy with your blindness
Heavy with your expectations that I will become what I am
meant to be
But still that I am nothing.

Jesus also told me that the spirit is willing but the body is
weak,
So what I say here means nothing If I don’t carry the yoke of
these words.

His burden was a hole in each hand, a crown on the head
and a tomb.

So if he could carry his yoke

I don’t need that thumb.
I can carry mine.

Posted with the permission of the poet
Editor this week: Andrew M. Bell

Hamish Petersen is a young poet whom I saw and heard reading as a Guest Reader at the Canterbury Poets Collective Spring Reading season 2014. I was immediately struck by the forcefulness, passion and conviction that Hamish conveyed when reading his work. Hamish is definitely a poet whose style is rooted in the oral tradition of poetry and his poetry possesses a potent extra dimension when read aloud.

When I watched him reading his work, I was fascinated by the way he really "inhabited" the poem so that he drew the audience in until they were tightly focused on his words, following him closely, almost like they were the poet's pillion passengers.

Although Hamish is a young poet with much life experience ahead of him, I feel that he has already forged a fairly mature voice which he applies to subject matter which is not easily pigeonholed.

In the poem above, I enjoy how Hamish uses punctuation in an unusual fashion so that it catches the reader off guard and often works in arresting interplay with the imagery. Some of Hamish's imagery catches me unawares, surprises me, and I love that. I keep returning again and again to that wonderful triplet in the second stanza: "That light seen but not touched/and like punching under water/leaves a thirst."

Hamish Petersen is still staking out the ground on his poetic journey, but I think he shows great promise and that we will be hearing a lot more from him in the future. 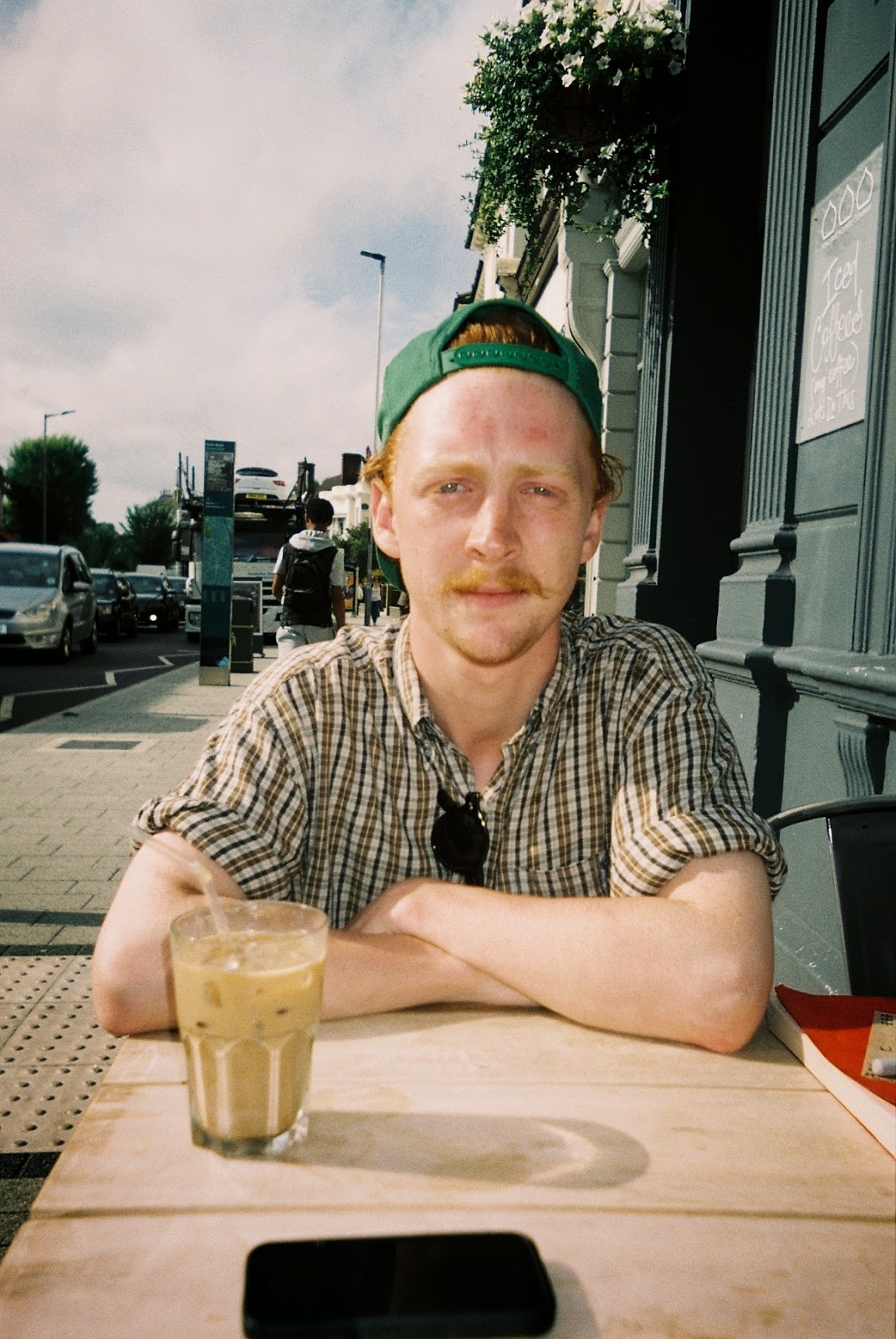 *
Hamish Petersen, the runner-up in the 2012 CETA Poetry Slam, has performed his poetry at the Pallet Pavillion Mid-Winter Market in Christchurch in 2013 and was a Guest Reader in the Canterbury Poets Collective Readers Series Spring 2014. Hamish also self-published a 20-page Chapbook of his poetry in 2013, entitled i am not a poet.

This week’s editor, Andrew M. Bell, writes poetry, short fiction, plays, screenplays and non-fiction. His work has been published and broadcast in New Zealand/Aotearoa, Australia, England, Israel and USA. His most recent publication is Green Gecko Dreaming, a poetry collection. Andrew lives in Christchurch and loves to surf. Some of Andrew’s poetry can be read at Bigger Than Ben Hur. His website is: www.biggerthanbenhurproductions.com

*
Please see the sidebar to the left for other Tuesday Poets' contributions this week.
Posted by Ben Hur at 12:01 AM 4 comments:

'Imagine a Woman Behind Razor Wire, Glimpsed' by James Owens, with art by Cheryl Dodds

1.
A long time ago, when we lived in the sky….
2.
But no, we never lived in the sky.
We invented that because of pain,
because desire tortures even the dirt and stones into division,
into definition fracture power solitude wall razor wire.
3.
(But pleasure is also real. Joy is real. One autumn day, my wife
climbed a fence and stole from a farmer’s disregarded field,
knotty tart small apples burnished by the wind and the sun,
and she gave me one, though I watched her eat and tasted her mouth, instead.
Not everyone remembers that such things are possible, since they often happen only once.)
4.
“Razor wire” is a slang term. Did you know that?
Industry professionals call it “barbed tape,”
which has a reassuring tone,
something your father would carry in his toolbox.
5.
If no one beats you, how do you know who you are?
6.
I insist on saying this plainly, without art:
if you remember joy, you should tell it
speak it
write it.
7.
Once I found someone’s voice lying on the ground,
a little puddle or puzzle of utterances, desperate
and wet and confused by having been cut or torn from a warm throat.
I brushed it off, and it huddled against the inside of my hand,
nuzzling for safety. I held it to my ear,
and it was like the sea shouting in the vast rooms of a shell,
but not like that, at all.
8.
Imagine a woman standing behind razor wire,
glimpsed, as you pass to your easy life.
This poem is not the gift of a woman’s voice.
See how external I have remained, despite certain maneuvers
that I hoped would bring me closer?
This poem is white noise leaning into silence.


Some gestures toward commentary on Cheryl Dodds’s "Railroad Diary, Istanbul, 2012":
1. My initial reaction to Cheryl Dodds’s extraordinary photograph was the thought, this forbids speech. The voice is caged. Not “the woman is caged” but her voice. Then there was long silence, while I wondered what I meant by that. I’m still not quite sure, though the poem makes little forays in that direction.
2. Geometry is a power here, and even if geometry is inevitably symbolic of tragic-historical forces adumbrated in the photograph’s title, in the woman’s dress, in the intrusion of “Western” repressive measures of control (razor wire) into what could have been a peaceful “Eastern” scene, still it is line and plane, as if drained of detail to reveal underlying structure, sky and wall and roof’s edge and drastic perspective that forces the human figure into one narrow corner of this near-abstract composition. She is held at this distance. She cannot come forward. We cannot go toward her. We cannot hear her speak, though this is what I desired.
3. Does it matter very much whether the woman is trapped inside the wall or outside? Either way, it is division that is heartbreaking, though division is also the birth of desire. (Underneath the writing of the poem, though unspoken inside it, is the likely etymology of “paradise” in Persian as something like “place enclosed by walls,” the sacred as set apart, the desirable as distanced. What, then, does it mean to stand outside of a prison?)
4. In a world supersaturated with images, including images from this photographed woman’s part of the world, images whose narrative we tend to consider transparently understandable, it is of great value to be reminded of the silenced voice that would speak outside of our expectations, the surface of the image that rejects our wish to hear (understand, empathize), the voice an object of desire like the luminous fruit in the now-long-forbidden garden. (Oh, but these fragments don’t say what I wanted to say.)

Copyright James Owens. Posted with  permission by the poet.

*
First published at Blue Five Notebook in the December 2014 year-end issue, in which the editors asked poets and fiction writers to contribute works based on a piece of art or photography. Other ekphrastic works can also be found in this issue, here.
*
JAMES OWENS has published two books of poems – An Hour is the Doorway (Black Lawrence Press) and Frost Lights a Thin Flame (Mayapple Press). His poems reviews, translations, and photographs appear widely in literary journals, including recent or upcoming publications in Superstition Review, Valparaiso Poetry Review, Poetry Ireland Review, The Cresset, and The Stinging Fly. He lives in central Indiana and northern Ontario.


CHERYL DODDS was co-editor/publisher for Urban Spaghetti, a literary arts journal. Her artwork has taken the form of mixed media, graphite drawings, photography, painting, woodcuts and multimedia as well as a few conceptual art projects. More of her work is online at AbsoluteArts.

MICHELLE ELVY, TP Hub Editor, is a writer, editor and manuscript assessor based in the Bay of Islands but currently in SE Asia. She edits at Flash Frontier and Blue Five Notebook. She is also an associate editor for the forthcoming Flash Fiction International (W.W. Norton, 2015) and co-ordinator of New Zealand's National Flash Fiction Day, More at michelleelvy.com (editing),  Glow Worm (poetry and fiction) and SV Momo (sailing).