‘Love at Livebait’ by Gillian Clarke

That time she stepped out of the rain
into the restaurant, and suddenly I knew.
Beautiful in her black coat,
her scarf that shocking pink
of fuchsia, geranium, wild campion,
and he at the table, his eyes her mirror.

She said she didn't know then –
but the light in her knew,
and the diners, the cutlery, the city,
the waiter filling our glasses with a soft
lloc-lloc and an updance of bubbles,
and the fish in their cradles of ice,
oceans in their eyes,

and all the colours of light in a single diamond
sliding down the window to merge with another.
Later, saying goodnight in the street,
they turned together into the city and the rain.
On the pavement one fish scale winked,
like a moon lighting half the planet. 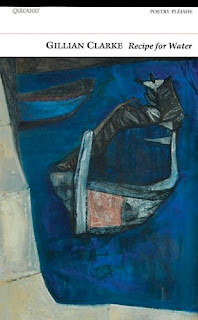 Gillian Clarke is a Welsh poet, playwright, editor and translator, and one of the most important figures in contemporary Welsh poetry. She was also my tutor on the MPhil at the University of Glamorgan.

She's best known for her poems about the natural world, war, and womanhood. I chose this poem from her most recent collection, A Recipe for Water, to show another side of Gillian's work. A love poem for someone else's love, and set in a city landscape. To me it still speaks unmistakably in her voice: that final image of the fishscale, and that disquieting image of a moon lighting only ‘half the planet’.
A love poem with a twist. And a poet who deserves to be better known.

‘Love at Livebait’ is published on Tuesday Poem with permission of the author, Gillian Clarke.
This week's Tuesday Poem editor, Joanna Preston, is an award-winning Tasmanaut poet who lives in Christchurch. Her collection The Summer King has just won the prestigious Mary Gilmore Prize in Australia (see Tuesday Poem sidebar.) Visit her Tuesday Poem - another poem by Gillian Clarke - and then check out the other Tuesday Poets using our blog list.
Posted by Joanna at 12:01 AM

I really enjoyed this poem, Joanna.

Wonderful use of language--I think my favourite lines might be:

"and all the colours of light in a single diamond
sliding down the window to merge with another."

I also like what you've told me about Gillian Clarke, that in Wales she's like a rock star and the Welsh fill stadiums to listen to her read poetry. Or have I got that wrong?

A slight exaggeration – she certainly has no trouble packing halls and theatres!

Lovely imagery here that dances about the poem.

This is a beautiful poem full of beautiful imagery.

I love that "lloc lloc" of the pouring wine, it's Welsh onomatopeia!