The Year of the Elephant by Michele Leggott

I chose this poem - which Michele sent to me a day or two after Mary asked me to edit this Tuesday's post - because it is so timely, an earthquake poem set in Canterbury, circling around the great human tremor where we all begin. It speaks of birth, our entry point into these unstable elements of land sea and sky, earth air and fire. The images are so apt this week just gone, given the tectonic birth pangs we are going through, shock by shock, in an edgy week of long labour.

Here, from a Christchurch Press review, is what I said of Mirabile Dictu - Michele's seventh volume of poems (2009), in which this one appears.

"She is surely a poet's poet: more accessible here than in her earlier work certainly but, sadly, destined it seems, to be appreciated by a tiny minority of the nation's readers.

This is not because there is nothing here for them - here is life in all its fullness, if you have learned to speak the language. These new poems contain some of her greatest lyrical flights, set down in broken strips of reportage, in dreamlike sequences, touching every aspect of a tactile world where light is fading as the poet's own eyesight fails, and her white walking stick appears as a character both in her life and, volubly, in the poems."

I concluded that "for those who wish to discover where New Zealand poetry has been, and where it might be heading, Leggott's work is a rewarding start line". 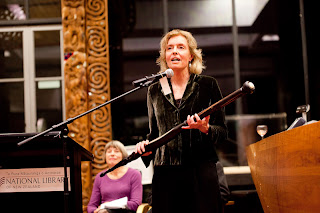 Michele Leggott, during her 2007-2009 tenure as New Zealand's Poet Laureate. Image: National Library of New Zealand/Te Puna Matauranga o Aotearoa.
"The Year of the Elephant" is published on Tuesday Poem with the kind permission of the author and Auckland University Press. This week's Tuesday Poem editor, Jeffrey Paparoa Holman, is a poet from Christchurch, New Zealand. Visit his Tuesday Poem September Quake on http://paparoa.wordpress.com/ , and the other Tuesday Poets using our blog list.

Postscript: There is a faultline of earthquake poems on Tuesday Poem this week! Check out:  Jeffrey Paparoa Holman's September Quake, Seattle Poet T Clear's post Earthquake, with Forty Pianos by Tom Porter, piano tuner; Boston Poet Melissa Green's  Christchurch as seen from the Nortern Hemisphere and Wellington Poet Mary McCallum's Earth.  No doubt there will be others.


Claire Beynon (TP’s co-curator) says on her blog about the way Tuesday Poem has come together this week:  “Together, we find the words we need to make sense of our world.  Today, it seems to me something new and different is unfolding... we're building a composite; a communal poem composed of many parts. What a privilege. Thank you all.”
Posted by Paparoa at 12:01 AM

Email ThisBlogThis!Share to TwitterShare to FacebookShare to Pinterest
Labels: jeffrey paparoa holman, michele leggott, the year of the elephant

I really loved this poem - it has such tremendous scope and the technique is fabulous!
Sorry not to be able to debate with you at the Christchurch litfest - perhaps one day in the future.