The Physiotherapist's Piano - by Jenny Powell

The bones of his piano
have fallen out of a tune,
their shape stacked in loose
arrangements of body parts.
He has spaced the ivory keys
across the floor with spinal
precision as if each gap was
linked by the nerve of a note.
Felt hammers lean in towers
of hollow bones, air slipping
through every crevice, the air
breathing a scale of ascent.
The physiotherapist hums
with his hands, coaxes the hinges
and pins, copper strings, backposts
and pedals, bridges and board
into an upright frame,
a skeletal dream,
a silent machine.
The physiotherapist turns
the piano to face the moon
limping across the sky, stars weeping
behind a veil of cloud, scent of loss
shiver of dark, the mouth
of night calling, urgent
and angry.
The piano begins
to remember the tune.


Copyright Jenny Powell - 2011
Reproduced for Tuesday Poem with permission from the poet. 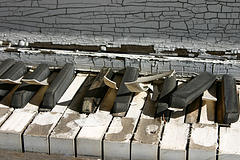 "Of course a physiotherapist would reconstruct an ailing piano just as he tends to the human body. As it finds itself, the piano remembers how to play the blues. . . " (Jenny Powell in an email conversation with Claire Beynon - 24 January 2010)
Even if I didn't know she plays the French Horn, I think I'd find it difficult not to imagine Jenny Powell as a musician as well as a poet. Her poems do more than carry sound, suggest sound, express sound. They themselves sound. Her language and landscapes thunder and tinkle; they hum and blast and roar. Structurally and rhythmically, too, they seem to me like musical compositions.
No sooner had I read The Physiotherapist's Piano than I felt compelled to read it again. And then again. For me, this has something to do with the poet's observations of what might initially seem to be a quite ordinary moment of maintenance and repair and yet has all the hush and intimacy of a vigil. The poet seems to me to be speaking as much of the relationship between a specific physiotherapist and his damaged piano/patient, as she is evoking that between universal healer/shaman and everywoman or man; our common, uncommon journey.
I appreciate the way Jenny invites us into the space of the poem, calling on us not only to witness the repair process but somehow also to participate in it. There is darkness here; delicacy and weeping. The process is not simple, straightforward; not all light.
Can one speak of a poem as 'patient'? I'm not sure - if not, may I at least suggest it has a quality of patience?

Jenny Powell is a Dunedin poet and secondary school literacy coordinator. She has written four individual collections of poetry - Sweet Banana Wax Peppers (HeadworX, 1998), Hats (HeadworX, 2000), Four French Horns (HeadworX, 2004) and Viet Nam - a poem journey (HeadworX, 2010). Helen Rickerby - one of our Tuesday Poets - introduced Jenny's latest collection on her blog Winged Ink a couple of months ago, shortly after the launch of Viet Nam - a poem journey.
As an artist interested in collaborative work, Jenny Powell initiated the collection Double Jointed (Inkweed, 2003) with ten poets of her choice, and in 2004 published Locating the Madonna with North Island poet Anna Jackson (Seraph Press).
Jenny features on the CD and book New New Zealand Poets. She was a finalist in the 2008 and 2009 Great Britain Aesthetica Creative Works Competition, short-listed for the 2009 UK Plough Poetry Prize and was a runner up in the 2010 UK Myslexia Poetry Competition. Her work can be found in a variety of international publications.

*
This week's editor is NZ artist & writer, Claire Beynon.
Remember to click your way down the side bar for more Tuesday Poems.
Posted by Claire Beynon at 12:01 AM

great choice - there's a lyricism here but in a slow steady - mending kind of way. And the picture of the old - broken down piano - like old bones is quite gorgeous.

I like the strength of the poem, the way it builds to the final two lines, "The piano begins/
to remember the tune"--and their ambivalence given the immediately preceding lines:

" ... the moon
limping across the sky, stars weeping
behind a veil of cloud, scent of loss
shiver of dark, the mouth
of night calling, urgent
and angry."

I agree with Helen, the crescendo or the building of the poem is quite remarkable. There is definitely something quietly devotional about it that is hauntingly striking. It begs another read!

Brilliant imagery to imagine the keys and hammers of the piano arranged into a skeleton - one of those images that seems so obvious once someone else does it, but somehow you never come up with it yourself.

an elegant poem; a poem that opens a door into a room that one never knew was there.
thank you, claire & jenny.

Thanks for sharing this Claire. A beautiful image - though kind of a chilling one, at least in my imagination - parts of a spine arranged on the floor.

I really enjoyed this poem. It uses a considerable amount of imagery. It opens the door to many interpretations. :)