A week of it by Dinah Hawken

It is dark.
Light
and dark again.
It is so.
It is something.
It is really something.
Small, beyond, becalmed
so be-all and end-all.
It is fine.
It is all that blue can be.
So be it.
It is too good to be true.
Are the odds against it?
If only it had another name
like so.
It’s alright. It comes along
in its own time, in the be-all without the end-all.
When it’s miserable
I fancy the o
in so.
So. It is this.
This is it. 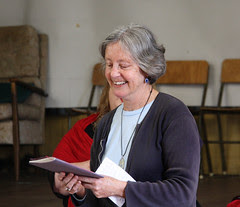 Dinah Hawken was born in Hawera in 1943 and now lives in Wellington, New Zealand. She is the author of five books - It Has No Sound and Is Blue, which won the 1987 Commonwealth Poetry Prize for 'Best First Time Published Poet', Small Stories of Devotion; Water, Leaves, Stones and Oh There You Are Tui (2001).
I feel privileged to have had a preview of Dinah’s forthcoming (6th) book - The leaf-ride. If you want to read more one of her poems "365 x 30" is at Best New Zealand Poems 2001.
Dinah has such a light touch yet her poems are substantial. There is a remarkable range of poems in The leaf-ride as it travels along in its ‘down-welling, up-welling drift’: poems that range from the power of a single word to the horror of violence to the joy of a newborn child.
Helen Heath is this week's Tuesday Poem editor, she blogs at helenheath.com. and lives in the seaside village of Paekākāriki, on New Zealand's Kapiti Coast. She completed an MA in Creative Writing at the International Institute of Modern Letters at Victoria University in 2009. Her poetry has been published in many journals in New Zealand and Australia. Most recently she’s had a chap-book of poems published by Seraph Press called Watching for Smoke (2009). Currently she is working on a full-length book of poems.
For more Tuesday Poems, click on the Tuesday Poets in the sidebar.


Curator Note: A week of it, it's been indeed. Tuesday Poem sends its condolences to the people of Japan following the devastating earthquake and tsunami. Tuesday Poet Janis Freegard's post expresses this with a haiku.
Posted by Helen Heath at 12:01 AM

Email ThisBlogThis!Share to TwitterShare to FacebookShare to Pinterest
Labels: a week of it, dinah hawken, Helen Heath

A poem to read aloud and to return to. Oh, I love Dinah Hawken's work - and by all accounts she's the best poetry teacher too. As you say, Helen, 'such a light touch yet her poems are substantial.' Thank you for this. A lovely picture of the poet reading too - but than those stilted author shots!

This is one of those poems that uses the simplest of ingredients to the most delicious effect (as Dinah does on so many occasions). One of my-time favourite NZ poetry books is her Small Stories of Devotion.

After reading these lines of pure grace I can't wait to read the rest of the book.

I like the whimsicality, with the vein of seriousness beneath ...

oops One of my all-time favourite NZ poetry books ...

Small Stories of Devotion is one of my utmost favourite NZ books of poetry too. I read it in high school and it inspired me to become a poet. Thanks Dinah! Can't wait to read The Leaf Ride!

A beautiful, beautiful poem. So stirring but with yes the simplest of language. Can't wait for the new book.