He has found the green door at last,

in a faded, jaded street.
And, slightly askew, it reflects
the slant of his memories.
Behind it, there might be a childhood,
if he could only reach the handle,
and against the glass
(the sunlit blood of stained glass roses)
there is the shadow of his father.
And the hallway builds back
into those small rooms.
In that one the faces turned
like flowers to the sun of her entrance.
That beautiful woman who spilt his love
easily as tea, and he only
the second best china.
But listen, there is his mother singing,
and a chorus of relatives rehearsing
their relatively small disagreements.
How much? He asks the scrap-yard dealer.
Well, the man says,
these things don’t come cheap.

Guest Editor James Norcliffe
Push is the title poem of NZ poet David Gregory’s 2008 collection (Black Doris Press). He is a stalwart of the Christchurch poetry scene, most obviously in his involvement with the Canterbury Poets’ Collective organised readings each year and his work (with John O’Connor) with Sudden Valley Press and Poets’ Group publications. He publishes relatively sparingly, unfortunately. 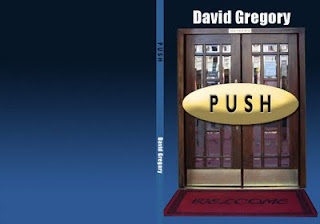 Doors and childhood are presiding themes of David’s work, so in many ways Push can be seen as an archetypal poem.  The “green door” of the opening line references, of course, the famous fifties song. In that song, you’ll remember, laughter, fun, and mystery were available to the initiates on one side of the green door; but the singer on the other side found only exclusion.
When the poet finds the green door at last in a scrap yard, “in a faded, jaded street” it offers only the “slant of memories” and these are painful: the shadow of his father, the beautiful woman who spilt his love, the chorus of disagreeing relatives. Moreover, whatever possibilities this disembodied door offers, they are only contingent - “if he could only reach the handle” there might be a childhood to return to. Note the modal verb.

Instead of a welcome, the poet must reconstruct the world beyond this “slightly askew” portal. In the final three lines David reveals that the door is in fact in a scrap yard and available for purchase although he is told by the dealer that these things don’t come cheap...
It’s a neat resolution and typical of David’s technique: investing the demotic, the throwaway, with a significance and resonance built up previously. I like this poem a lot. Like so many of his poems it presents itself as a small narrative, but typically, it withholds as much as it gives. The poet hides behind the lamppost of the third person, a point of view that, paradoxically, allows for greater intimacy.

Note the craft and care with word choice; the street, in the context of the green door, is jaded – a word freighted with both greenness and disillusion. There is the detail of local colour: the stained glass roses, the second best china. These swift brush strokes summon up a time and place efficiently and are of course the kind of glittering details memory provides.
Above all, there is in this poem the playfulness always in David’s best work, at odds with the wistfulness; and as always in his best poems, these temper each other. It is a tightrope strategy. A misstep one way could plunge the poem into wordplay for wordplay’s sake; a misstep the other could land the poem in sentimentality. In Push that David negotiates the tension beautifully.
In addition to Push, David's books include Always Arriving (1997) and Frame of Mind (1999), both Sudden Valley Press. The covers of all three books feature doors. His work also features in the Aotearoa NZ Poetry Archive.
This week's guest editor is poet, fiction writer and educator James Norcliffe of Christchurch, NZ. His most recent poetry collection is Villon In Millerton (Auckland University Press, 2007). Last year James was invited to read at the XX International Poetry Festival in Medellin (Colombia) and this year has been invited to read at the Trois Rivieres International Poetry Festival in Quebec.


The Loblolly Boy and the Sorcerer (Longacre/Random), the follow-up to 2009’s award-winning YA novel The Loblolly Boy, has just been released. James has a rudimentary website : http://jamesnorcliffe.com/ He has lived for extended periods in Brunei Darussalam and China.


Check out the poems in the sidebar written and selected by our regular Tuesday Poets from NZ, the UK, the US and Australia.
Posted by Mary McCallum at 12:01 AM

I love this poem - the movement in it - the green door at first seems to stand on its own like a stage set, surreal, symbolic even, dreamlike perhaps (he can't reach the handle) ... but then there is life behind it - a home, but who's there? - and how exquisitely the memories are evoked, the beautiful woman, the mother singing... and then we're in a second-hand place with the door for sale. I didn't know the 'green door' in the 50s song, James, but your telling me about it has added to my initial reading. Thank you for bringing us David's poem and David for letting it come..

I think this poem was my favourite in David's "Push" collection--a great choice for the Tuesday Poem hub.

A lovely poem. Sad, but beautiful. Thanks James.