Editor Susan T. Landry
Lorine Niedecker was an American poet, an avant-garde poet, a poet of nature, a poet of ordinary life, a poet who lived under the roof of the sky and beside a river. She had what people with limited imagination might call a modest life, and yet wrote imagistic, crystalline poems that convey a rich intellect and an ability to see, really see, what was around her.

I first discovered the work of Niedecker after I wrote and submitted a poem to the bi-weekly, short-poem group I belong to, called Brevitas. I was still living in New York City, but I think buried within me, down where the words live that come out when I have a need to conjure up poetry, I had a yearning. The desire to leave, to move somewhere quiet, close to water and the woods was beginning to insist. I can’t remember what I wrote that conveyed this, but one of my fellow poets in the group e-mailed me and said that the poem I sent around made him think of Lorine Niedecker. He said, you will like her work: she has an intimacy with nature that you are seeking.

Niedecker rarely titled her poems. They light on the page like dragonflies or sprawl inside the book like stalks of dried grass, tucked away for later - here are two of them.


Spring
stood there
all body

October
is the head
of spring

Birch, sumac
before
the blast 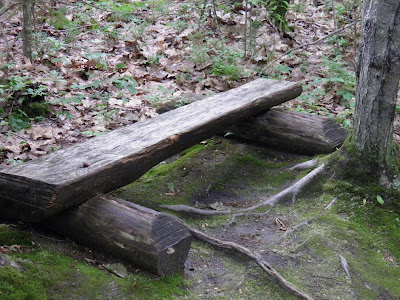 Jenny Penberthy edited the definitive volume, Lorine Niedecker, Collected Works, published by the University of California Press, in 2002. (It’s the book I bought when I wanted more.) The poems I quote here are from a Web page, also edited by Jenny Penberthy, at http://epc.buffalo.edu/authors/niedecker/poems.html. Bob Arnold, literary executor for Lorine Niedecker, was kind enough to give me permission to reprint these poems.

The photograph is mine, of the Maine woods.

For more Tuesday Poems check out the poets in the sidebar - up to 30 of us from all over: the US, the UK, NZ and Australia.

Susan T. Landry is this week’s editor of Tuesday Poem. She lives in Maine, is a medical editor by trade, and also enjoys fine-tuning work for friends, other creative writers and artists. She belongs to Brevitas, an invitation-only short poem e-mail exchange that meets in person only once a year, for a gala evening at the Bowery Poetry Project, in New York City; writes and posts an occasional poem on her blog Twisted Knickers, where she also natters about whatever she fancies, or doesn’t.
Posted by susan t. landry at 12:07 AM

Beautiful poem. I understand that feeling, the need to be nearer nature. Niedecker is one with it. :)

The lines, "Don't fall in love / with this face— / it no longer exists / in water / we cannot fish" are just amazing. She manages to talk about time and environmental degradation without being heavy handed. Are her poems quite short? Originally I thought that the two you posted were one poem, which made some interesting sense to me.

I also read them as one and loved the way they weave in together.

Thank you for posting these.

Excellent choice, Susan. Thanks for the introuction.

Another "new" poet for me, but I enjoyed the delicacy and brevity of the works. Thank you for introducing me to Lorine Niedecker via the Tuesday Poem Hub, Susan.

i am pleased that TP readers are intrigued by Niedecker; i hope you explore her work further! thank you for stopping by, and thank you for commenting.