These things I must steel myself against
Old men packing books into boxes
The empty seat between people at the movies
The smell of armpits on cardigans
Ironing on the dining table with a towel underneath
Friends who no longer talk to each other
Bejewelled butterflies or fairies
And cards with ‘reach for the stars’
Square brittle toe nails
And plastic bags filled with plastic bags
A choc chip muffin to celebrate something
And unplanted punnets with the white roots
straggling from beneath the blue plastic
Board games with missing pieces
And everything with pieces missing
And everything that is in pieces
And everything that is missing.

I love this poem: the way it lists multifarious things that set the teeth on edge, yet also the way that the last three lines recast these sundry offences into a picture of everything that is missing.  A completed jigsaw of missing pieces?  Every one of the senses is touched upon in this short work.

Dr Sarah Rice is one of the most intellectually energetic people I have met. Stand by her and the ideas swarm out like bees, but multi-coloured bees without stings.

I have had the pleasure of participating in two workshops run by Sarah, here in Canberra.  One was on ecopoetry, and one on ekphrasis, and both times she has presented more material than I have been able to assimilate on the spot, but which I have mulled over for some time afterwards. 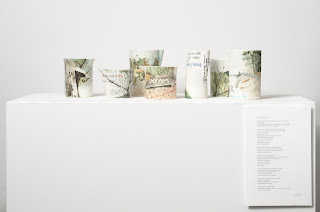 Sarah's way into poetry was largely through the visual arts, and she remains vitally interested in the spaces between one art form and another.  She is an art-theory lecturer, visual artist and writer.  She was an award winner in the 2011 Gwen Harwood Poetry Prize, commended in the 2011 CJ Dennis Literary Awards and highly commended in the Michael Thwaites Poetry Award. 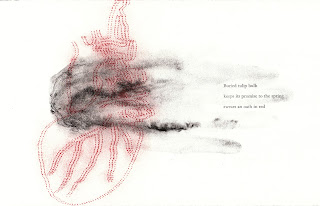 Her poetry is published in Island, Southerly, Blackmail Press, ACTWrite, fourW twenty-two annual anthology, as well as in the Australian Poetry Members’ Anthology.  Her collaborative work with ceramicist Patsy Hely 'On the Mountain' (poetry on hand-painted porcelain vessels) was exhibited at Craft ACT in 2011.  Her limited-edition art-book of poetry Those Who Travel (prints by Patsy Payne, Ampersand Duck, 2010) is currently on display in the NGA, and her work is included in the current exhibition 'Hand Set - Letterpress poetry broadsides from Ampersand Duck' at the ADFA Academic Library gallery.

Two photographs here capture something of the scope of Sarah's work: one of the collaborative ceramic project mentioned above, and one from Those Who Travel. Thanks to Sarah Rice for letting me reproduce her poem, and for these images of her other projects.  Now I'm just off to ADFA to check out the poetry broadsides!

When you've gobbled up Piecemeal, do check out the poems in the sidebar where 30 Tuesday Poets post poems they've written or admire. It's well worth it.

This week's Editor P.S. Cottier aka Penelope Susan Cottier is an Australian poet and short story writer who lives in Canberra. Published in anthologies internationally, she has two collections of poetry and one of short stories to her name -- the most recent being The Cancellation of Clouds. She is also a keen blogger and Tuesday Poet, and has worked as a lawyer, university tutor, union organiser and a tea lady. Her next book, one third of Triptych Poets Three, is launched next month.

A gorgeously plangent, and beautifully balanced and paced, poem. Thanks a bundle for introducing me to this poet.

I found myself returning to the thoughts this poem evoked today, ie clearly the very best sort of poem, that gets under one's skin!

Should it be 'steel' not 'steal myself against'?

This IS lovely - thanks, Penelope and Sarah. The buried tulip bulb is also exquisite!

Thanks Anonymous. It should indeed be 'steel'. Fixed now!
I don't know how that sneaked - or snuck - in.

The first word that came to mind when thinking what to say about this poem was "balanced", so I think lillyanne has got it just right in her comment above. Thanks for giving us the chance to read this fine poem, Penelope!

What I like about this poem is the fact that the list of things the poet steels herself against is a list of things which are themselves missing something in their imperfection. Youth, closeness,
deodorant, friendship and so on. And although it's such a random list it feels like mine! Thank you Sarah and great choice Penelope.

Beautiful. I was particularly drawn to the 'ironing on the dining table with a towel underneath' listed item. I love its domestic offensiveness - it seems so quiet, almost. Thanks so much for sharing Sarah's work, Penelope - I will seek out more. It is stunning.