On small planes by Fiona Kidman

rain and delays, and a long way south, suspension
on a cloud, books take you everywhere.

My epitaph may be that she was a small woman
who spent her days in small airports flying
on very small aeroplanes to middle-sized towns. 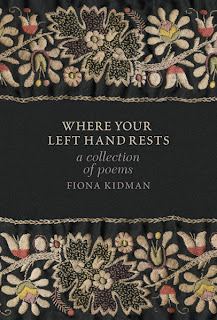 I was thrilled to bits to find copies of Fiona’s book of poetry – Where Your Left Hand Rests (Godwit, Random House) – in several bookshops while I was in Wellington. It is such a beautiful book. Kudos to the designer and the press. This is the poem I found when I opened the book at random. At random, just like the press. The book was published in celebration of Fiona’s 70th birthday. It’s selling really well, in fact there has been a reprint. Wonderful for poetry, wonderful for Fiona, and wonderful for us.

New Zealander Fiona Kidman is a leading contemporary novelist, short story writer and poet. Much of her fiction is focused on how outsiders navigate their way in narrowly conformist society. She has published a large and exciting range of fiction and poetry, and has worked as a librarian, producer and critic. Fiona has won numerous awards and been the recipient of fellowships, grants and other significant honours, as well as being a consistent advocate for New Zealand writers and literature. She is the President of Honour for the New Zealand Book Council, has been awarded an OBE and is a Dame Companion of the New Zealand Order of Merit for her services to literature. The French Government has made her a Chevalier de l'Ordre des Arts et des Lettres and a Chevalier of the French Legion of Honour.

'On small planes' is published with permission, when you've read it - try more Tuesday Poems out in our sidebar (to the left.)

This week's editor, Jennifer Compton, was born in Wellington, emigrated to Australia in the early 70s and lives now in Melbourne. She is an award-winning playwright and poet, with 'Barefoot' shortlisted for the John Bray Poetry Award in 2012 and 'This City' (Otago University Press 2011) the winner of the Kathleen Grattan Award in NZ.  She has also been awarded a number of residencies including one at the Randell Cottage in Wellington, and blogs here.
Posted by Jennifer Compton at 12:01 AM

Nice compact thing. I like how you opened the book at random and found this poem. What I like best about this poem is that, without being ponderous, it leaves you thinking about who this person is. It's personal but it could be anyone, too.

A truly beautiful book by one of New Zealand's most humble and accomplished writers.

"suspension - on a cloud, books take you everywhere."

thanks Jennifer for posting

Short but beautiful! It says such a lot in a small space.

I very much like the 'sameness' and 'smallness' of this poem. Habit can be such a comfort when we come to define or give an epitaph of another. Great random choice, Jennifer!

My love for you has never faded away
Can't visit you any more, the pain affects my day
the day you left my happiness went away
I still pray for the day
That health comes your way
:-)