For New Year I wish you

Janus, the god who looks forward
and back, till his pupils dilate, intoxication
of distance. On your calendar it’s his month.
Here is the photo he hangs on your wall:
salt caravans in Niger,
from a paraglider, so high that camels
seem strung as if notes on scribbled staves of song.
On the horizon, a thin sprinkle like fire-blackened grain:
another caravan. One way with millet to trade, the return journey
with salt. They follow the line of the sand dunes, begin
in autumn, stop
before summer rains.
Those little blips are human beings, commas, apostrophes, keeping the line.

My wish for you: Janus, the god of transition. Here, in the last
islands of human arrival, the ancient
journeys belong to birds. When autumn comes, you’ll stand
on the beach to watch
shearwaters, day after day, low to the ocean, wings tipping the spray and the rocks
of the headlands.
They loop the Pacific, come back in spring.

The birds, the camels, doodle, meander,
embellish the lines on the mental map.

Janus, the god who lays out
mental maps. With a thumb nail he flattens
the folds. The paraglider delights him, the long
view, the old is the new.  He sings its audacity.
When you first learned to balance, unsteady, surprised,
this was the song that he gave you.

Since then, self-mutilation
of bumper-to-bumper, the queues in the customs hall.
Still he sings it, insists, on your calendar,
through the letters of your name, till you play it in your finger bones
like crystals of sunlight
that quiver down dunes, till you push out from the beach, dance it
in the arches of your feet as they brace
on wet slanted wood, on the slow-rising heft
of water. As they take one step.

Around and around it comes back. Can you hear it
that song? Yes. The intoxication
of song.
After rain, and when the wind shifts to nor’ west.

I wish this for you: Janus, who unlocks
the doors and tells you, the world, the wide shining world
is open. Go through.


'January Begins' was first published in Poetry NZ vol 46 and is posted here with the poet's permission.
Editor: Claire Beynon 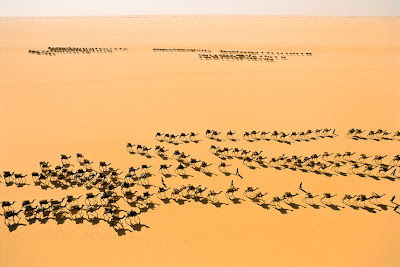 Reading Carolyn McCurdie's poetry, I experience a kind of 'lift-off' as if my feet are no longer touching ground. Her words transport me to a world entirely 'other', her poet's landscape and sensibility at once intimate, restrained, vast, dramatic and original. Carolyn has a way of capturing the expansiveness of the whole - the overview - whilst simultaneously zooming in to her subjects with metronomic measure and penetrating accuracy. An air of enquiry, of 'scrupulous kindness', seem ever-present. Her poems open readers to encounters with place, persons, concepts and considerations that are spatial and sensory, reverent and relevant. And her poems are beautiful - compassionate and graceful in their engagement with life's subtler realities. Carolyn brings tenderness and light to themes that might elsewhere be cloaked in darkness or weighted by human frailty; our common, uncommon story.

About January Begins, Carolyn writes, "One of the things my sister gave me at Christmas 2011 was a calendar in which the January photograph was the one in the poem of camels in Niger. It was taken by 'National Geographic' photographer George Steinmetz from a motorised paraglider. It bewitched me and the poem seemed to arise quite straightforwardly from that. Then, quite a while after completing the poem, I began to understand other things about it.  In June 2011 my mother had died, aged 91, at the end of a life that had been diminishing for some time. I had been her carer for 11 years. Turned one way, I can hear in the poem that I am speaking to her. Turn it another way, and she is speaking to me."

I am struck by the way January Begins carries the hushed notes of Carolyn's conversation with her mother whilst at the same time speaking (or so it seems to me) into the heart of our current global situation. Whether or not she intended this, I find myself challenged to move with the poet as she transitions from the personal to the universal, from the private sentiments exchanged in her home to dialogue of a global nature and scale. In a flash, she takes us from the image in the calendar to the paraglider, 'so high that camels seem strung as if notes on scribbled staves of song'; desert expanse and coastal landscape are drawn together as if by sleight of hand, juxtaposed in bold language and plain sight; we find ourselves considering the possibility distance and death might be no more than a matter of perception, catch a glimpse of ourselves and our world as coordinates on the same map or - perhaps -  as two voices capable of music, harmony, collaboration.

Sharing airspace with her paraglider, we are granted a moment or two in which to witness ourselves and our planet from up close and at a distance - an opportunity to consider and come home to some new understanding of features and fractures, barrenness and riches. For me, the second and fifth stanzas seem especially suggestive of this ---

My wish for you: Janus, the god of transition. Here, in the last
islands of human arrival, the ancient
journeys belong to birds. When autumn comes, you’ll stand
on the beach to watch
shearwaters,

like crystals of sunlight
that quiver down dunes, till you push out from the beach, dance it
in the arches of your feet as they brace
on wet slanted wood, on the slow-rising heft
of water. As they take one step.

The poem's final stanza brings us and this conversation full circle. The poet addresses her mother with tender, permission-giving urgency and at the same time issues us all with an invitation.


I wish this for you: Janus, who unlocks
the doors and tells you, the world, the wide shining world
is open. Go through.

Carolyn McCurdie lives in Dunedin, New Zealand, in a sun-filled house that looks out on hills, bush and farm land - a 40 minute walk to the city centre. She has been writing poetry for approximately ten years. Her poems have been published widely in print and on-line. After the Art Gallery was highly commended in the Caselberg Trust International Poetry Competition 2011 (judge: James Brown) and Making up the Spare Beds for the Brothers Grimm won first place in the NZ Poetry Society's 2013 International Poetry Competition. In his judge's report Vincent O'Sullivan wrote, ". . . Only a very good poet writes lines as effectively as that. Or so direct and elusive at the same time. In one sense, everything is so in place. Shift focus a little, everything carries threat. And that sense of apparent domestic order - there are cracks, stains, puzzles, that don't allow us to believe a word of it, even as we cannot rationally say why. All we are aware of is where the poem entirely directs us - the world is not as we see it, even when it is."

In addition to poetry, Carolyn writes short stories for adults (in 1998 she won the Lilian Ida Smith Award for these) and fiction for children. Her compelling fantasy novel The Unquiet was published in 2006 by Longacre Press Ltd. Penelope Todd, writer and founding director of Rosa Mira Books describes Carolyn as 'a writer of quiet power'. Yes.  A writer of poise, potency and presence, too.

In her reply to my letter expressing my wish for her to be this week's featured Tuesday Poet, Carolyn mentioned she'd be away at the time January Begins was posted. "In a few weeks I leave for what is, at the age of 66, my first big overseas adventure. I am using money that Mum left me. Part of the plan is to visit the London street where she grew up, and then on to Glasgow to stand in the street that was my father's home. Circles. . . "

Indeed! Safe and stimulating travels to you, Carolyn.

Please visit Carolyn's page on the New Zealand Society of Authors website - www.authors.org.nz - and for more of her poems, visit Deep South www.otago.ac.nz/deepsouth


To enjoy another week's selection of fine Tuesday Poems, please click on the links on the side bar.

This week's editor, Claire Beynon, is an artist, writer and independent researcher based in Dunedin, New Zealand. She blogs here and here. Her website is aging gracelessly and is sorely in need of an update.

Entries for the Caselberg Prize (First Prize NZ$500) will be welcomed between 1 October and 31 December 2013. For more information please go to www.caselbergtrust.org

A rewarding trio : the poem,the image, the analysis.

I too have a sense of lift off. Also something very poignant and delicate with the knowledge that for Caroline, in the folds, there is a conversation taking place. It can be turned over and heard differently. A beautiful poem (and image) and a rich response from Claire.Thank you.

I love the way Carolyn has let her mind fly in this poem,allowed herself to bring in so many images and relate them to the photo and her own everyday life.
Here, in the last
islands of human arrival, the ancient
journeys belong to birds. When autumn comes, you’ll stand
on the beach to watch
shearwaters, day after day, low to the ocean, wings tipping the spray and the rocks
of the headlands.
They loop the Pacific, come back in spring.
Thanks for a great post Claire and Carolyn.