The Biography of Mr Carrot (Daucus carota) by Frankie McMillan


Our family was large; when we met
we embraced six hundred times

for a long while I was inseparable
from my cousin

but such is life
you learn to let go of things

not meant for you
Marcel Proust wrote to Celine

ten times in the hope
of boeufs - carottes

painting where I lie
in the arms of my brothers

but not my cousin
Daucus pastinaca

remind him, if you see him
of the market carts pushed

through the streets of Paris
the cry of traders

the small history of our grandmothers 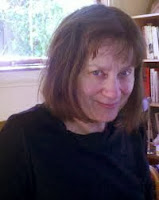 Frankie McMillan is a Christchurch short story writer and poet. Her publications include ‘The Bag Lady’s Picnic and other stories’ and a collection of poetry, ‘Dressing for the Cannibals’. Recent short stories have been selected for Best New Zealand Fiction, Vintage, 2008 and 2009. Her poetry has been published widely in NZ and overseas and her work selected for Best NZ Poems, 2012. Awards include the CNZ Todd Bursary in 2005, winner of the NZPS competition in 2009 and the NZ Flash Fiction competition in 2013. Frankie is the co-recipient of the 2014 Ursula Bethell Residency at the University of Canterbury.

I have always enjoyed reading Frankie McMillan's poetry or, better yet, hearing her read it at poetry readings around Christchurch. Frankie's poetic take on the world around her appeals to me as it is a bit left of centre and comes from a unique poetic perspective all her own. Frankie is obviously widely-read and well-read as many of her poems, such as this one, contain erudition and arcane knowledge. There is a lot of information packed into a fairly short poem leaving the reader to scurry off and track down sources to her many references. For instance, is Frankie having a sly joke in her reference to "Marcel Proust wrote to Celine/ten times in the hope/of boeufs - carottes" given Proust's well-known sexuality? And who is this cousin of the carrot hiding behind its scientific Latin name?

The Biography of Mr Carrot is published on Tuesday Poem with permission.

Today's editor, Andrew M. Bell, is a poet from New Zealand/Aotearoa. Visit his Tuesday Poem blog at www.aotearoasunrise.blogspot.com and be sure to check out the wonderful poems by the other Tuesday Poets using our blog roll to the left of this posting.

I enjoyed this poem about memory, and carrots and parsnips, and family history.

Thank you to the poet, and to Andrew for introducing me to her work.

Oh, I love this - the heartfelt lines 'such is life, you learn to let go of things' swirling around with this enigmatic cousin and the carrots! Just wonderful. Thanks for sharing, Andrew and Frankie :)

I love that last line!

it's delightful. I enjoy the 'erudite' allusions they add to the fun. Great to see Frankie on TP and thanks for posting this Andrew.

Loved it - particularly that laconic, 'such is life, you learn to let go of things' and the sly humour. Thanks Andrew, thanks Frankie.

Yes! I'm a fan of Frankie McMillan's writing -- love coming here and finding this, even a couple months later. Great poem! It has a winking style -- light but with something(s) lurking below the surface, too.