In the last days, after all he said
and didn't say, his iron tongue
resting in the open bell of his mouth,
the belfry of his face asleep,
I climbed the spiral steps of the tower -
up the steep steps of the bell cage, to the bourdon
the great bumblebee, Emmanuel.
I stared at that bronze weight, the voice of Paris,
as if it was my father's voice
and I had climbed up his spine,
all thirteen tons of copper and tin,
the clapper half a ton of exorcised iron.
I washed the outside with holy oil for the sick,
the inside with chrism.  Let all badness
be banished when he rings.  Let the powers of the air
tremble - the hail and lightning
that fell from his tongue on our last days together.
I made the sign of the cross.  His note
was F sharp, the hum
deep enough to reverberate through the rest of my life.
I stood upright in him
I placed the myrrh inside his mouth, incense
smoking like a last cigarette.
I praised him.  I assembled the priests.
I mourned his death.
Storm clouds dispersed.  Thunderbolts scattered.
I tolled in Sabbaths.  I raised
my father's life to its hoists and rang him until I was deaf.
I proclaimed peace after bloodshed.

This is one of the poems from Pascale Petit's newly published collection Fauverie, from Seren Books. Emmanuel is the big bell that hangs in the south tower of Notre Dame in Paris and the poem, like others in this collection, concerns the death of a father and the powerful pull of a great city, as well as memories that are going to 'reverberate through a life'.   But things are not exactly as they seem. 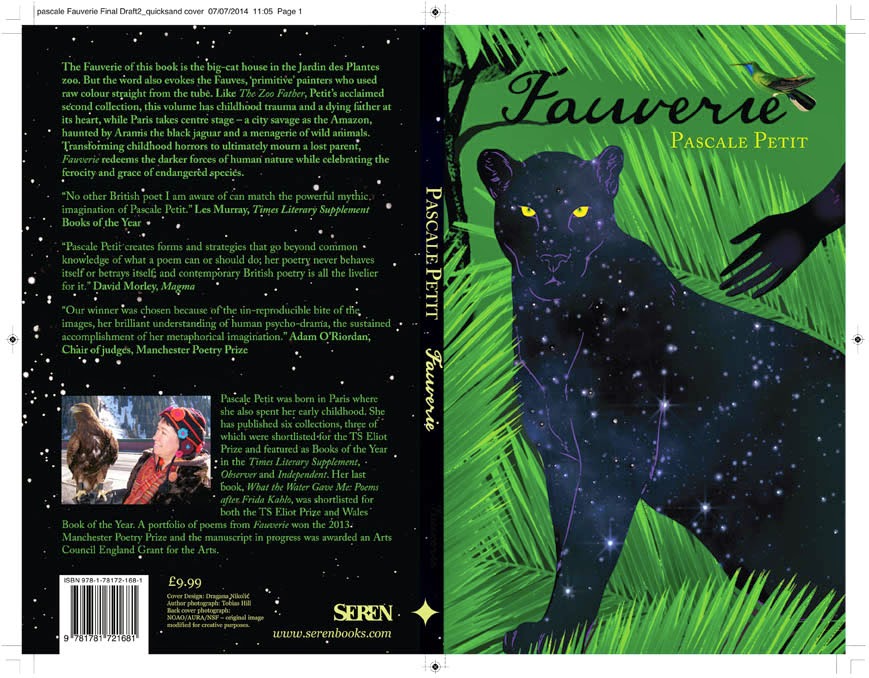 The Fauverie is the big cat house in the Jardin des Plantes zoo in Paris - a city portrayed in these poems as ‘savage as the Amazon’.  At the centre of the collection is the big Jaguar, Aramis, beautiful, wild and dangerous in every cell of his powerful body. And there is also the poet’s father, now weak and dying, but still able to arouse turbulent emotions and painful memories.  There is ambivalence and ambiguity in everything - ‘ferocity and grace’ exist side by side - the wild can be both savage and seductive. Humans are also animals.

There is a direct reference, in the title of this collection, to Fauve painters who used raw colour straight from the tube and were regarded as 'the wild beasts of art'.  Pascale Petit was also a visual artist and she is fascinated by the idea of ‘wild beast poetry’ that looks at the primitive and the spiritual at the same time.  Fauverie follows, and references, her second collection, The Zoo Father, published 13 years ago.  The poet is now less angry and more compassionate than she was when her father died, but still unflinching and much more complex.

Pascale’s father is also Paris - a city that is, for the poet, both full of pain and full of joy.  This is transformative poetry which comes from what Les Murray called Pascale Petit’s ‘powerful mythic imagination’.  The poems are informed by a deep knowledge of art, mythology and psychology, though you don’t need to understand any of the references in order to understand the poetry. The sub-text is exactly that. But there is a keen sense of danger. Every line is liminal - you walk precariously on the edge between worlds, on the thresholds of different visions. The dictionary defines liminality as: ‘the quality of ambiguity or disorientation that occurs in the middle stage of rituals, when participants no longer hold their pre-ritual status but have not yet begun the transition to the status they will hold when the ritual is complete.’

Here Liminality is the right word, because the great beauty of these poems is the power that they have to disturb and disorientate the reader.  We feel the destructive strength of Aramis, marvel at his beauty; we are pierced by the poet’s grief for her dying father, revolted by the way human beings kill and consume other animals, by the way they treat each other.  Who is the predator?  Who is the prey? This is poetry that is going to change the way you look at things.

The collection tells a story - beginning with the arrival of a letter,

‘Never before has a letter been so heavy,
growing to two metres in my room,
the address, the phone number, then the numbness,
I know you must be surprised, it says,
but I will die soon and want to make contact.’

And then the meeting between estranged father and daughter, described in 'Kissing a Jaguar'

The first meeting was like I’d had
Virola snuff blown up my nostrils.
Alone with my father
in a room he called ‘la jungle’.

Back in her hotel room the poet ‘retches all night’, but next morning is up and walking the streets of Paris

All paths lead to the Fauverie
and this is where I come to, again and again,

to where Aramis has stars for a coat
and his mouth is a sky-gate
the jaguar shaman climbs through.


There is incredible cruelty in the poems - a darkness that reveals childhood traumas.  For me one of the most horrific poems was Pate de Foie Gras, which describes the conditions where ducks and geese are force-fed, ‘broken beaks/torn throats, maggots in neck wounds’ and spend their lives waiting in fear, but also in hunger, for the moment when the ‘gavage’ will be thrust down their throats.  But the whole is constructed as a metaphor for the childhood memory of being made to eat Pate de Foie ‘part cooked, a whole lobe’; when the farmer clasps the neck of the bird,  it is the small girl who is being force-fed.

Much of the darkness in the poems is expressed in food - a milk fed piglet (cochon de lait) sawn in half and wrapped in cling-film for sale in the market, (Grenelle Market 1).  In another, the child who has been locked in the cellar comes up for air in the food market where ‘The counters smelled of raw light/ of butchering and fiesta.’  One of the most horrific is ‘Ortolan’.  Apparently Francois Mitterand’s last meal was an Ortolan and the poet imagines her father eating one before he dies, the small bird drowned in Armagnac, grilled and eaten whole.  In the poem Blackbird, the poet, locked in the cellar as a punishment as a small child, is personified as a bird. 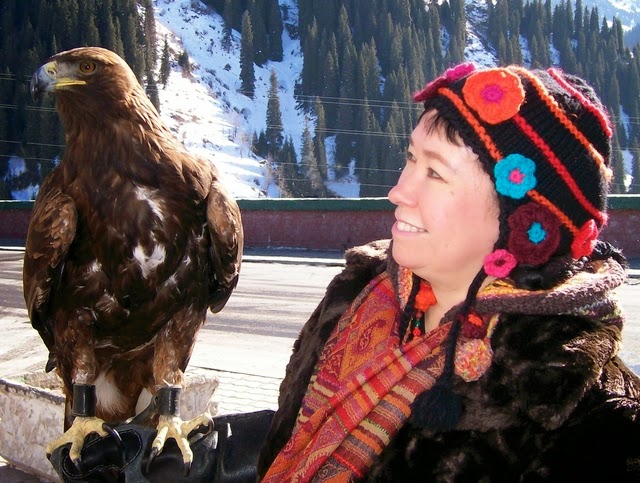 Pascale Petit was born in Paris, where her mother lived, but partly brought up by her grandmother in Wales.  She has always been very open about her parent’s abusive treatment, which included being locked in a cellar regularly as a punishment. The suffering of animals becomes a metaphor for the suffering of the child.  In Paris the plates are piled high with ‘lambs’ tongues’, but it’s only when the poet, older now, has come to the safety of Wales that she can allow herself to ‘hear their bleats’.

The connections between her childhood traumas and the preoccupation with the animals of the Fauverie, and particularly Aramis, are very clear.  In Self-Portrait with King Vultures (N’Golo and Margot), there is comfort;

The connection is more explicit in the poem Le Sang des Betes, where the poet is in a train;

My carriage moves on, past the dangerous
work of the mind

except as flashes from the train-tracks
of history,

or only confronted in animal form.

Pascale admits the ‘element of the supernatural’ in her work, attributing it to her Welsh grandmother’s influence.  This collection is further exploration of the way that childhood trauma can be transformed into art, which was so carefully probed in What the Water Gave Me - Pascale’s collection of poetry around the life and work of Frida Kahlo. Pascale, who studied at the Royal College of Art and was at first a sculptor, clearly identified with Frida’s ability to make great art out of suffering.  But this is definitely not ‘art as therapy’, nor is it about taming savagery or the healing of wounds – it is the transformation of ugliness into beauty and vulnerability into power using words and images.

In a recent interview (available online here)  Pascale talks about her work and in particular ‘writing the personal’. (6.34 minutes in)

‘It is very hard to write personal and painful subjects in poems ... I don’t feel that I have a choice... That’s what I need to write ... I don’t think my work is just about autobiography, what I’m really interested in is investigation’  particularly ‘exploration into what we call good and evil’.  Her ‘difficult’ and abusive parents gave her intense material.  Travelling to the Amazon as an adult artist gave her new ways of looking at it.
‘I want to take my parents into that rainforest place . . . and try to see what there is about them that’s good and what’s bad and why and to try to make them somehow beautiful - the amazon is beautiful as well as ‘a green hell’.   ‘People have an extraordinary mythology ....  Putting my parents in that kind of context ... gives them a new light.’

It's National Poetry Day in the UK this week.  Pascale Petit will be reading at London Zoo Library, Regent’s Park, on October 4th with Fiona Sampson, Ruth Padel and Niall Campbell.  1-2 pm.

This week's editor is Kathleen Jones, an English poet, novelist and biographer who lives in Italy.  Her first full collection is Not Saying Goodbye at Gate 21, published by Templar, and her biographical subjects include Katherine Mansfield, Christina Rossetti and Norman Nicholson. She blogs regularly at 'A Writer's Life' and you can find her books at www.kathleenjones.co.uk

If you've enjoyed this poem, please take a look at the sidebar and check out what the other Tuesday Poets are posting.
Posted by Kathleen Jones at 12:20 AM

A wonderful poem and commentary: thank you, Pascale & Kathleen

Glad you enjoyed it - the collection is very powerful.

GOD THIS IS POWERFUL!! Thanks Kathleen and thanks to your extraordinary poet. Marvellous.

Thank you Kathleen for your very insightful review, I became a vegetarian over the writing of this book! Thanks for kind comments from all, they are most encouraging.