I like to start my morning walks
earlier in late summer
before the Hawke’s Bay heat engine
gets going
and the flies start up.

There are people already
some with dogs...
we smile and exchange
handfuls of words.

and I see the ragwort
is making a comeback
from spraying and insects...
good.

It’s cool at the top...
I sit for a minute
to look around
grateful for the quiet

and a small plane zizzes
through the sky
carrying its cargo
back to Wellington.

On my way down
I see the bunny –
a small one,
dead already

engrossed in making
a meal for maggots.
My friend Vicky
would be mortified

but I say... what about the flies?
like developers
they deserve a chance.


From Bill Sutton's collection Jabberwocky, Steele Roberts, 2014. Reprinted here with the kind permission of the poet.

Bill Sutton says: Since I returned to live in Napier, every week I've climbed at least one of the three hills around Taradale, for exercise and to catch up with the seasonal changes.

Tim Jones says: Hawkes Bay Live Poets were kind enough to invite me to be their guest reader in May 2015 - a trip I greatly enjoyed. Bill was my generous host, and before the reading he tested out my calf muscles with a climb up Sugarloaf Hill so he could show me nearby Taradale, Napier a little further away, and the wide expanse of the Bay.

I had no idea he had written a poem about Sugarloaf Hill, so when I got home and started reading his collection Jabberwocky, I was excited to see such a fine poem about a place I had visited so recently.

I first met Bill when I attended the 2013 National Poetry Conference in Havelock North. This year's conference in in Wellington - I hope you can make it! 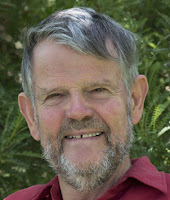 Bill Sutton lives in Napier. Previously a DSIR scientist, senior policy analyst and Labour MP, he grew up on a South Canterbury farm and in 2013 organised a national poetry conference in Hawke’s Bay. His poetry collection Jabberwocky (2014) is available from Steele Roberts.

With Mark Pirie, he co-edited Voyagers: Science Fiction Poetry from New Zealand (IP, 2009), and with P.S. Cottier, he co-edited The Stars Like Sand: Speculative Australian Poetry (IP, 2014). His poem "Kraken" won second prize in the Interstellar Award for Speculative Poetry 2015.
Posted by Tim Jones at 12:09 AM

Bill's poem also stands up with those of us who have never been to (this) Sugarloaf Mountain. (It seems to be a popular name!) I particularly like the comparison of flies and developers, and the postmodern rabbits.

I very much enjoyed reading this - it feels like I'm right there! Thanks Bill and Tim.

Sorry, I'm not a poet, but would like to know where Sugarloaf Hill got it's name? Was it because it resembled the Sugarloaf Hill in Okinawa, Japan where the bloodiest battle during the second world war was?