In The Desert by Stephen Crane

In the desert
I saw a creature, naked, bestial,
Who, squatting upon the ground,
Held his heart in his hands,
And ate of it.
I said, "Is it good, friend?"
"It is bitter – bitter", he answered,
"But I like it
Because it is bitter,
And because it is my heart." 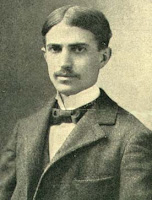 Stephen Crane (1871-1900) was an American poet, novelist, short story writer and journalist. His life was short, but eventful, and his output prolific. I have it on good authority (ie the internet) that he is regarded as one of the most innovative writers of his generation and that he won international acclaim for his American Civil War novel 'The Red Badge of Courage'.

I came across this poem in 'The Oxford Book of Short Poems' (Oxford University Press, 1985). It was originally published in 'The Black Riders and Other Lines' in 1895 by Copeland and Day. This was his second published book of poetry with a first print run of 500 copies - and a few issued in vellum. Crane apparently referred to them as "lines" rather than poems and they were printed entirely in small capitals.

I like the striking image of the "creature" in this poem, and the repetition of "it" sounds.


Janis Freegard is the editor of this week's Tuesday Poem. She is co-author of AUP New Poets 3 (Auckland University Press, 2008) and lives in Wellington, New Zealand. You can visit other Tuesday Poets from our blog list to the right.

Shock of recognition still, as when I first read it years ago.

Reminds me of Shelly's "I am Ozymandius (sp.?)

Self-devouring creature terrible yet the poem is so satisfying. I'll eat the poem, but it won't disappear.

Yours for eating in the mind,
Mim

Great choice.
so few words, and yet so much there to consume.

It is a poem once read, never forgotten. Thanks for the re-visit.

wow, I really like this - thank you for posting it

A startling poem, this... so powerful it leaves an after-image, an imprint. As Penelope suggests... 'aren't we, don't we, isn't it so?'

There's something of Yeat's monster in here.

Are we not asked to sit from time to time with our heart in our hands, exhorted to chew on ourselves, sweetness and bitterness both?

Thank you, Janis. For me, this poem not have been posted at a more appropriate time. C

I meant to write 'for me, this poem could not have been posted at a more appropriate time.' C

I like the "it" repetitions too. Creepy, it stays with you.

A problem with blogger comments at the moment - only one comment is showing up. I commented last night and can't see it... so here we go again. Stephen Crane was 24 years old when he wrote this poem in 1895. He died at 29. I read In the Desert out on a radio current events panel yesterday - it fitted well with one of our discussions about young disassociated men with knives... (especially as Stephen was 24). Thanks for finding it Janis.

So succinct and vivid, leaving with me questions why, musings about the nature of our hearts, our taste for bitterness. Or is it just the bestial man who savors bitterness while the civilized questioner expects things to be to one's liking... Wonderful piece of poetic history. Thank you.

This is 1895! And it forces us to re-think the common story that modern poetry began with the shock of the Great War. It's simple, direct and goes directly for the jugular with not a whiff the 19th century. We are not that far here from punk rock.