Where the first pear slug hasn’t won,
the first frost has. Gaunt
the hawthorn’s lichened boughs
rise to cloudless skies and
for once no mower clamours loud.
Day? It’s a cracker. Just right
for worship, celebration, carousel
and the planting of jonquils.

Reading Janet’s poems…
the pocket mirror shows jaw
and bone under a Sunday stubble.
Next spring the bare hedge will bloom again;
but at present all too clear is its gaunt frame.

﻿﻿﻿﻿Tribute by Tuesday Poem curator, Mary McCallum.
Tuesday Poet, Harvey McQueen died on Christmas Day aged 76. He was the oldest poet in this community of 30 poets from four countries we call Tuesday Poem. The posts on Harvey’s blog stoatspring, and the comments he made on other poets’ blogs, resonated with the wisdom, insight and honesty of a long life well lived, and were underpinned with a restless intelligence and curiosity that seemed to increase rather than diminish with age.

And Harvey’s blog posts weren’t your average ‘tossed off’ sort of posts – for he was a skilled writer. As one blog visitor, 'Dragonfly', said, s/he was drawn to Harvey's blog by his love of  language. The language was certainly as important as the message, and each post had structure and intent. As well as his seven volumes of poetry, Harvey edited as many anthologies, wrote books on educational issues, and published two memoirs including This Piece of Earth (Awa Press), based around his passion for gardening.

Harvey’s blog was a ‘live’ memoir – full of recollections and peregrinations, poems written by himself and others he admired, book reviews and political commentary. His posts were always thoughtful and wide-ranging. Stoatspring had a number of keen visitors on an almost daily basis, and most certainly on a Tuesday when it was time for a poem.

The poem posted here, with permission from Harvey's wife Anne, was written in the late 1960s and posted on stoatspring on October 18, 2010, He was quietly pleased because fellow writer Dame Fiona Kidman had declared it a favourite, and he explains how it sprung from reading Janet Frame's poetry collection The Pocket Mirror.

Harvey joined Tuesday Poem near the beginning of its life in April last year. He was uncertain at first, as he was relatively new to blogging, but quickly caught on, embracing the concept of a loose community of poets linked to at a common hub. Wheelchair-bound due to a muscular degenerative disease, Harvey found Tuesday became the day of the week when he would ‘socialise’ with poets around NZ, and in the US, UK and Australia. His blog followers grew exponentially.

In July, Harvey wrote Poet's (Wander)land : a post on the delights of the Tuesday Poem. He said, 'After the bluster, bombast and backbiting of much that is on the internet it was a relief to be in a gentler arena, a topsy-turvy world where blue may not be a favourite colour but can be a favourite word. Or a place where a fox is a wolf bearing a flower.'

I remember the palpable thrill Harvey had discovering a new poet or poem on the other side of the world or over the hill  (as he does here with US Tuesday Poet Melissa Shook), the astonishment when writers commented on a post of his seconds after it went up, and the particular delight he had one week when he managed to track down - via another blog reader - a poem Tuesday Poet Belinda Hollyer of the UK was seeking. She'd given him one line to go on: ‘I was nine at the time and a coward by fate’.

What continued to delight and surprise Harvey, was the ready communication and warmth of people a generation or a world apart linked by their shared interests via the internet. And he certainly added to that with his own generous posts and comments about poets and their work. I was always particularly pleased to have Harvey comment positively on a poem of mine.

Harvey’s posts also gave his own poems the context of his life and the passion he held for nature, with commentaries that were, at times, intensely moving. There will be Tuesday Poets who will remember Harvey’s post Patrick, the poem he wrote on the death of his stepson, or the last poem of his own he posted:


I was also affected by Harvey’s posting of G.K. Chesterton's The Donkey -  because, like Harvey, my father had learnt it at school and quoted it often. The commentary is pure Harvey: ' Chesterton’s rollicking rhyme entered my literary midden. Also, obnoxious child I must have been, I pointed out that the animal could not be dumb if it had a sickening cry.'

And then there were the posts that rekindled my love of the work of Thomas Hardy, and opened up the poems of NZ nature poet Ursula Bethell. It was Bethell's poem Time Harvey chose when he was editor of the Tuesday Poem hub. He said of it, 'it still rings bells in my soul.'

Any post by Harvey was worth a visit, not just the poetry postings on a Tuesday. I loved the way the world still excited him, literature and the stuff of the mind pulled him in multiple directions, and that he always saw potential for change. His recent posts on Katherine Mansfield demonstrate this. After devouring the latest biography by Tuesday Poet Kathleen Jones – and posting on it, Harvey felt he had to re-read a small book by KM’s friend Ida Baker and post on that too.

And then he began to reread Mansfield's short stories.The last post he wrote himself, three days before he died, was on this topic. He said, 'This present slow read is an re-exploration of a tourist spot once enjoyed with enthusiasm and vigour.'

I liked seeing the number of Harvey’s blog readers increasing via Tuesday Poem, and especially enjoyed seeing the younger poets discover him. One of the highlights of Tuesday Poem so far for me was when three of us – Tim Jones, Saradha Koirala (one of our youngest poets) and myself - attended the launch of Harvey’s inspiring collection of 100 NZ poems: These I Have Loved. I must have met Harvey when I was an education reporter in another life, but this is the first time I remember meeting Harvey the poet.

He talked at the launch about his life as a teacher instilling a love of poetry, and how a bunch a rural kids couldn’t warm to Wordsworth but lit up when he read them Ruth Dallas’ Milking Before Dawn. That poem kicked off Harvey’s passion for teaching NZ poetry in schools, which in turn led to his work as an anthologist. Tuesday Poet Jeffrey Paparoa Holman pays tribute to Harvey's ground-breaking work in this sphere.

Harvey was born in the rural community of Little River in NZ's South Island and died in Wellington. He was supported until the end by his wife, Anne Else, a writer, reviewer and blogger. A secondary school teacher, Harvey went on to be a school inspector and an educational advisor to Education Minister and Prime Minister David Lange at a time of tremendous upheaval in schools. In 2002, he was made an officer of the NZ Order of Merit.

The following is written up more fully in my blog tribute to Harvey: 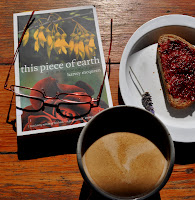 'The first book on my list of hammock reading over summer was This Piece of Earth.I started it on Boxing Day, without knowing Harvey had died on Christmas Day, and finished it three days later drunk on its lovely words.

It’s a book that begs you to take the time to reconnect physically with the planet: listen to the song of the tui, appreciate the chutzpah of the self-sown seedling, observe the wings of the housefly, delight in the brief scent of the violet, share a green herb soup. It is written in a way that slows you down, calms you, makes you think again...

A day after finishing the book, I heard Harvey had died. I was devastated. It seemed so incredibly strange to have my head full to brimming with his voice and his words, when he was no longer on this earth to say them. And yet, I guess… how it should be for a writer, how he’d want it to be.'

Tuesday Poem has been very lucky to have had Harvey McQueen as a member and we will miss him. Some of the tributes by Tuesday Poets are below.

Anne Else has written the Last Post on Harvey's blog, and other tributes can be found on Bookman Beattie and his poetry publisher Mark Pirie's blogs.

Our condolences to Anne, his family and friends. A Memorial Service will be held at Old St Paul’s, Wellington, on January 28 at 11 am.

This week's editor is Mary McCallum. Thanks to Anne Else for permission to run 'Reading Janet Frame' and to Jeffrey Paparoa Holman for the Maori phrase which he used in his tribute to Harvey.
Posted by Mary McCallum at 12:01 AM

Mary, thank you for this very special and thoughtful tribute to Harvey. And I love your choice of poem for today.

Yes, thank you, Mary. Harvey and his presence here will be much missed. xo

I agree with Helen and Claire, Mary: this is a most apt tribute.

What a lovely tribute - and such beautiful quotes. I only knew Harvey through his blog and the Tuesday Poem adn we exchanged occasional emails, but I had the impression of someone with great integrity who was also a very gifted writer. I'm sad that I won't be able to get to know him better.