So all day long the noise of battle roll’d
Among the mountains by the winter sea;
Until King Arthur’s table, man by man,
Had fallen in Lyonnesse about their Lord,
King Arthur: then, because his wound was deep,
The bold Sir Bedivere uplifted him,
Sir Bedivere, the last of all his knights,
And bore him to a chapel nigh the field,
A broken chancel with a broken cross,
That stood on a dark strait of barren land.
On one side lay the ocean, and on one
Lay a great water, and the moon was full.
…

And slowly answer’d Arthur from the barge:

“The old order changeth, yielding place to new,
And God fulfils Himself in many ways,
Lest one good custom should corrupt the world.
Comfort thyself: what comfort is in me?
I have lived my life, and that which I have done
May He within Himself make pure! but thou,
If thou shouldst never see my face again,
Pray for my soul. More things are wrought by prayer
Than this world dreams of. Wherefore, let thy voice
Rise like a fountain for me night and day.
For what are men better than sheep or goats
That nourish a blind life within the brain,
If, knowing God, they lift not hands of prayer
Both for themselves and those who call them friend?
For so the whole round earth is every way
Bound by gold chains about the feet of God.
But now farewell. I am going a long way
With these thou seëst—if indeed I go—
(For all my mind is clouded with a doubt)
To the island-valley of Avilion;
Where falls not hail, or rain, or any snow,
Nor ever wind blows loudly; but it lies
Deep-meadow’d, happy, fair with orchard-lawns
And bowery hollows crown’d with summer sea,
Where I will heal me of my grievous wound.”
.
So said he, and the barge with oar and sail
Moved from the brink, like some full-breasted swan
That, fluting a wild carol ere her death,
Ruffles her pure cold plume, and takes the flood
With swarthy webs. Long stood Sir Bedivere
Revolving many memories, till the hull
Look’d one black dot against the verge of dawn,
And on the mere the wailing died away.
.
by Alfred Lord, Tennyson, 1809-1892
.
Editor: Helen Lowe 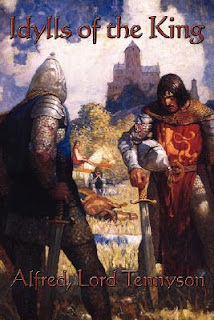 The Morte D’Arthur, or Death Of Arthur, is probably the most well known in Tennyson’s Idylls of the King, which draws on Sir Thomas Malory’s medieval work of the same name (Le Morte D’Arthur) as well as the Celtic Mabinogion. Because it was the first written of the Idylls poems and the last in chronological sequence, I have included the first, and also the final two stanzas today.

The  Morte D’Arthur is one of a long tradition of epic poems, from Homer’s Iliad, through the Anglo-Saxon Beowulf and Middle English Sir Gawain & The Green Knight to later works such as Milton's Paradise Lost.  Like both Sir Gawain & The Green Knight, and Malory's earlier work, Tennyson's Morte D’Arthur draws on the Arthurian legend, which was also known as  ‘The Matter Of Britain’ in the Middle Ages because of it’s subject matter.

Like its predecessors, Tennyson’s poem demonstrates the enduring influence of these ancient stories and the way in which they continue to ‘speak’ to us afresh in each new generation.  In Tennyson’s case the medium was poetry,  but I believe the influence is clearly discernible in contemporary literature, including Tolkien’s The Lord Of The Rings, Mary Stewart's The Crystal Cave, TH White's The Once and Future King, and Susan Cooper's The Dark Is Rising. As both a poet and and fantasy novelist I am honoured to be part of so grand a tradition.

As for the poem  – last mentioned but very far from least  – I feel that in terms of poetic power and language, it really speaks for itself.  To read an illuminated version of the poem from 1912, click on: Morte D’Arthur.  ~ Helen Lowe

Alfred, Lord Tennyson, 1809-1892, is one of the most well-known and enduring of the Victorian poets, his considerable body of work distinguished by an outstanding lyric gift for sound and cadence. He was the Poet Laureate of Great Britain and Ireland throughout much of his long and distinguished poetic career.

Love how this poem tells a story, and such a famous one! The language can be tricky to get to grips with at first but you get used to it pretty quickly.