Afternoon with Simon by Ashleigh Young

A reflection fills the rain
on the window: it’s Simon, proffering his lunch-taker
filled with gold almonds: almondos he calls them.
His eyes have the shine of all good editors’ eyes:
polished by finding.
I drop my pen, reach over, trailing red
crossed-out fingers:
I have been attacked by a man-eating grammar.
My eyes have been prised from my head
by looking.
Simon studies the lines of rain and eventually
starts talking, beginning each sentence with ‘I suppose’
because he is too hospitable not to leave room
to agree with somebody else
and he also really does suppose:
sometimes assuming that all this is true, sometimes only
imagining it to be so.


We clear a spot amidst the books that nobody
in this country will read. We are the international
editorial team: ours is the great city of color
and Mom and ‘You betcha’
circled by ocean, not sea.
We make our talk up
like newspaper shelters in the street: strange at first
and lifting at the edges, soon becoming part
of the city’s furniture.


Simon, too, has a voice that lacks volume.
When people catch wind of it
they interrupt to save him
the trouble. Well, their cars go faster. But, goddammit,
he has things to say; like
if in doubt, laugh
even if doing so will offend someone
because the odds are you will offend them even more
if they think you are serious –
which in the current climate is the no. 1 risk –
or they will not notice you and will tramp right through your house.
In conversation, a quiet-voiced person
needs plenty of space, needs flags to wave, needs
a moat filled with deep water.


Through our window, a giant Dan Carter
stands there in his undies. Imagine having
that confidence – to wear yourself
like you were an expensive set of clothes.


Simon does lunges
in his homemade trousers.
I ask what he is doing but he doesn’t hear;
he’s partially deaf, sometimes partial to being deaf
and I suppose I would have more friends
like Simon if the other people didn’t catch the half-things I say.
This is a job where so many words go forth heroically
only to fall through a rotten board in the floor.
But it does not matter that crucial parts have been lost.
I used to say nothing and now I am talking;
used to live nowhere and now I am eating
gold almonds in the afternoon, with shelter. 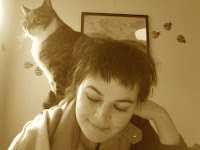 Ashleigh Young is a New Zealand writer currently living in London and blogging at eyelashroaming. She is well-known for her creative nonfiction works (or “pieces”, “sketches”, “things”, as she called them in a Booknotes article): she won the Adam Foundation Prize in 2009 for her essay collection, Can You Tolerate This? (the title essay can be read here), and her essay, “Wolf Man”, won the Landfall Essay Competition the same year. She is perhaps not so well-known for her poems, despite their regular appearance in our off- and on-line literary magazines (Sport, Turbine, Best New Zealand Poems).
Her poem, “Certain Trees”, is the final poem in The Best of the Best New Zealand Poems, and was singled out by Sam Hunt as the best of them – the best of the best of the best.
There’s not much I can add to that, except to say that Ashleigh Young’s voice is, I think, unique – in both the essays and the poems, I hear its distinctive, individual tone of engaged enquiry, a curiosity about the world that suspends judgement while still reaching tentative conclusions. It wonders where things are going, and follows them, and the reader can’t help but wonder and follow too.
I’ve chosen “Afternoon with Simon” as it typifies her strengths. The poem appears to meander through a not particularly busy afternoon, and it’s not until the end that we realise how acute the observation is. I find this poem extraordinarily humane, and I feel richer for reading it.
Tim Upperton lives in Palmerston North, New Zealand. His poems have appeared in various places including Agni, Landfall, New Zealand Books, Sport, Turbine, and The Best of Best New Zealand Poems. His collection A House on Fire (Steele Roberts) was published in 2009.
Thanks Tim! Now do take time to check out the poets in the sidebar including Melissa Green at the bottom of the list because her blog isn't updating on the blog roll.

Thanks, Tim, for introducing me to Ashleigh's poetry. This is a fine, thoughtful poem.

Thanks for sharing this Tim, I really enjoyed it. It's a lovely, meandering poem, introducing ideas, things, then musing on them. I also liked it as a fellow editor, often with inky fingers.

It *is* lovely, eh? I confess it was chosen almost at random - her poems are wonderful. Go read the ones in Turbine and Best NZ Poems if you haven't already.