From Bird Murder by Stefanie Lash

Tusk was settled by rogue miners.
They went too far up-creek, there was no gold, they were lost.
They found instead the coloured stones.

The women are most industrious in tusk
and the children hop from house to house.
Perhaps because of the minerality of the River tusk

children’s hair will colour as they age.
Purple is the predominant hue; some boys turn green.
The huge prismatic slabs dominate industry:

tiling, tinted tonics prepared from the glacial flour,
some paper, an abundance of silkworms nearby.
From the terraced town the sea is very visible,

but visitors don’t come here. The jetty isn’t long enough
for pleasure boats and the blue mountains hug
and nest them so closely.

Swan fat for our faces is delivered in ice boxes.
On school days I count the windows of the manse
then count them again.

Wring, wring. Press my knees dry.
I must not look behind any statue.
I wear the whale in between each rib.

When I grow up I will learn to drive
and I’ll drive back and forth across the country
without ever needing petrol.

My name is Passerine and
I sigh into a man’s hat up in the attic.
J is for Juno, whispering down my telescope.

For feathers to iridesce
the molecular structure
is like a prism;

or air pockets retained in the feather
scatter light uniformly;
for feathers to be black,

Pearls dissolved in vinegar.
Rinsed in the milk bath.
Only exposed to moonlight.

Have you seen a bird’s skull
aerially
like a droplet of bone frozen.


Posted with permission from Stefanie Lash and Mākaro Press. Soon to be published in Bird Murder.
Tuesday poem editor this week: Helen Rickerby 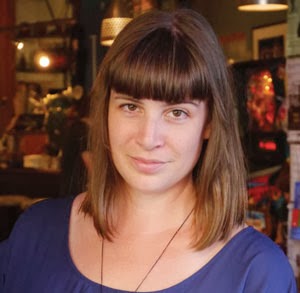 Stefanie Lash is a poet and archivist who lives in Aro Valley, Wellington. Her poems have appeared in journals including Sport, Takahē and Turbine. Bird Murder is her first book.


I couldn't resist. I know it's cheating, but it's Tuesday Poems this week rather than a Tuesday Poem because I couldn't resist sharing three of the poems from Bird Murder, Stefanie Lash's debut collection of poetry, which is going to be launched next week (details below). Bird Murder is one of the three books in the Hoopla poetry series, to be very soon published by Mākaro Press (along with Heart Absolutely I Can by Michael Harlow and my own collection, Cinema).

This is the official blurb for the book:


An albino huia, a stranger in the attic and a pink-haired woman ... Bird Murder is a gothic murder mystery telling of the demise of a ruined banker, set in the not-quite fictional town of Tusk.

At the heart of the story is the sacred bird, the huia: its beauty, curiosity and ‘fluted conversation’, and the consequences of its slaughter by early settlers.

As evening falls and Mr Cockatrice and his wife prepare for a party, questions surface. Are the gimlet-eyed creatures in the bird room capable of revenge? Is the stranger perching in the attic more than he seems? Or is the temptation of a fine head of cherry’d hair reason enough to murder? 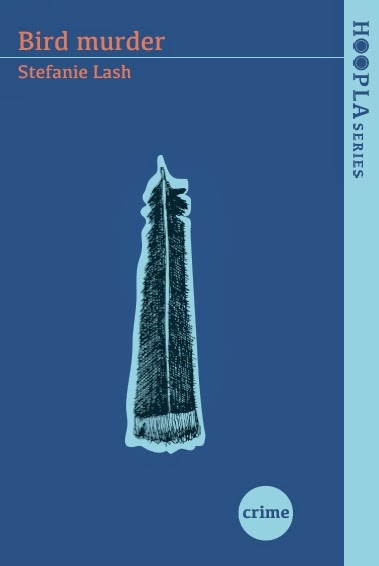 I was lucky enough to get to get a pre-publication read of Bird Murder, and gosh it's good. I've never read anything quite like it. It's sort of a 'verse novel', as they call them in Australia, in that it tells a story over the course of the book, but it's so much more than that. The verse novels I've read have, it seems to me, sacrificed the poetry for the story, losing the richness of the language and ideas and layering of meaning. But that is so not true of the poems in Bird Murder, where the language is sparkly and playful, and so much is going on under the surface.

Although it is made up of poems in the same strict form - five stanzas of three lines each - there is such variety in this book. (Hence my desire to share more than one of the poems.) The styles and tones of the poems vary, and line lengths go from a single word to ones that stretch right across the page. The sum of the parts adds up to a unique collection that is by turns magical, grim, humorous, mysterious, strange and very satisfying.

It is also quite educational. You'll learn a lot about huia and other birds - along with the fiction there is a lot of fact, as evidenced by the notes and references at the end.

As I said, Bird Murder, along with Heart Absolutely I Can by Michael Harlow, and Cinema by me, is going to be launched next week, and you're invited. It's also a celebration of Mākaro Press's first year in the publishing business, and the end of Writers Week. So, Thursday 13 March (that's next week!), 5.30, Blondini's (the cafe at the Embassy Theatre), Wellington. Hope to see you there!


This week's editor, Helen Rickerby, has published two-and-a-half books of poetry, and her new collection, Cinema, will be published by Mākaro Press next week. She runs Seraph Press, a boutique publishing company with a growing reputation for publishing high-quality poetry books, and she is co-managing editor of JAAM literary journal. She blogs irregularly at wingedink.blogspot.com and has a day job as a web editor.

And do check out some of the other Tuesday Poems that you'll find in the sidebar to the left.
Posted by Helen Rickerby at 12:10 AM

Some strange and fascinating images. A unique poetic voice.

Thanks for posting, Helen, and I hope Makaro sells truckloads at its launch. Best wishes for a successful launch.

Thank you Helen for posting this and Stef for your poems. Mākaro Press feels privileged to be publishing you both along with Michael Harlow's work. Such riches!

Great post. Such quirkiness to these poems. I like the whole concept of the book and will look forward to hearing more. Of the poems posted here, I like the introduction to Tusk, and to Passerine, but I especially like the third poem. Thank for sharing, Helen -- and here's wishing a wonderful launch!

A very interesting read. I am glad to add one more poet to my mental list.

Well a hell good poem! :)
have mine collection too! www.jangidpurshottam.blogspot.com