The old Chinese lady
who lives next door
lays out her washing
on a red-tiled roof
as if she were back
in her childhood home.

She sings to herself
a song with long pauses,
a song passed on
full of comings and goings
like the sea on
a calm day when
it drifts in exhausted.

It's a song with no real
end or beginning. One
we still hear
even in the pauses
as she stoops
to water her money-tree
or reaches heavenwards
to collect her washing.

We don’t have many godwits homing to New Zealand from Yorkshire, except for Peter Bland, a bird of poetic passage and many migrations between here and there since his first long journey south on an immigrant ship in 1954, bearing his precious copy of T.S. Eliot’s Prufrock. 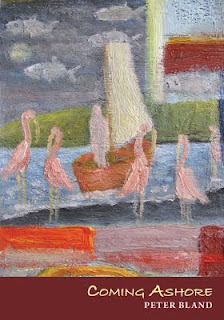 Peter Bland has been fattening himself on these feeding grounds ever since, and enriching us with eleven collections of poetry on the way, as well as co-founding Downstage Theatre and acting in local film. Now 77 years old and a widower mourning his lost love, Beryl, he is back amongst us, living in Auckland and our most recent recipient of the NZ$60,000 Prime Minister’s Award for Poetry.

He deserves it, richly: and to celebrate, we have his latest collection, Coming Ashore, launched last week in Wellington by Steele Roberts. I was asked to speak to the book on the night: a rich collection of elegy and history, and sharply-observed images of the inner and outer life of the poet through his bicultural world views.

This poem, “Song”, is one of my favourites, of many choice pieces here: the viewing persona observes a next door neighbour, a Chinese woman, quite elderly it seems, singing as she hangs out her washing. In 21 carefully crafted and understated lines, Peter Bland brings her to life: the song, the strange quality of otherness and the keening for home its sounds evoke, “full of comings and goings/like the sea on/a calm day when/it drifts in exhausted”.

She sings as she waters her money tree, she sings as she looks up to heaven hanging the washing: here is an immigrant captured in print, somewhere between life and death: “It's a song with no real/end or beginning. One/we still hear/even in the pauses/as she stoops/to water her money-tree/or reaches heavenwards/to collect her washing.”

There is no moral, nor strain: simply the pellucid poise of the best of the ancient Chinese poets he so admires, the emotional ache that we can feel in the final lines of Ezra Pound’s “The River Merchant’s Wife”: “If you are coming down through the narrows of the river Kiang,/Please let me know beforehand,/ And I will come out to meet you /As far as Cho-fu-Sa.”

Bland is at one with his subject here because he has stood on similar ground: the immigrant, the man of two worlds with two sets of voices in his head, those from a childhood home, and those from New Zealand streets. This is why he can give her back to us with such simplicity and depth – but only a life of dedication to his craft can help us a little way in explaining the power of his art.

This poem is published with the permission of Steele Roberts and you can find Coming Ashore here. When you've absorbed "Song", take yourself into the right hand sidebar and discover up to 30 poems from the Tuesday Poets linked to this blog.

This week's editor Jeffrey Paparoa Holman is currently on leave from Tuesday Poem while he is writer in residence at Hamilton University in NZ's central North Island. Our thanks to him for his post on Peter Bland. Jeffrey is a poet and academic who normally resides in Christchurch and blogs here. His last post was an earthquake poem.

Enjoyed this one immensely. So much in fact I went looking to see what more there was and in doing so discovered this gem, ‘I left this morning’.

A really beautiful poem - so simple and direct. I'm off to do the same as Jim ....

Thanks for your comments left overnight from the far side of the planet, and the link, Jim. 'I left this morning' is one of a number of poems Peter wrote to his wife who died 18 months ago. He has a collection on this theme called Loss. There are also two in Coming Ashore, and when he read one of them at the launch, people cried. Peter says Beryl was his muse.

A wonderful poem---and a great start to my Tuesday Poem week!:)

I have always loved Peter Bland's poetry. As an immigrant his'Stone Tents' written so long ago spoke to me: "Two countries split me down the middle; One where I 'came from' and one where I first learned to live."
...and Chinese poets: Li Po who wrote his poems, made paper boats from them and set them off down his little river...."She does not sorrow that her life is sad but that so few can understand the sorrow in her song."

Mum, I should have remembered you loved Peter Bland's poetry! 'Stone Tents' I remember now and your quoting it. And thank you for the Li Po quote - perfect for Peter's 'Song'. Xx

i especially love poems that leave the reader with a visual memory that lingers long after the words have disappeared. like this one.
thank you!

Oh, I could have sworn I posted a comment here earlier in the week, but apparently not. As with Susan, the visual imagery of Peter's poem lingered and drew me back - a little like following a trail of music to its source. Thanks Peter and Jeffrey.

Bland's poetry is the way a contemporary voice and a modern concern with the itinerant mind never at home even in its own past are communicated in poetry which has regard for stanza, rhyme in the form of assonance and alliteration, and rhythm which never quite becomes metrical.