The All Blacks by Robert J Pope

Sound, trumpet and drum,
For the All Blacks have come,
Bowed down ‘neath their burden of glory;
They have put in the shade
Old Achilles, and laid
On the shelf all the heroes of story.

Neither England nor France
Could withstand their advance,
Though ’gainst Newport they had a near squeak;
Old Ireland fought gamely,
Nor did Wales suffer tamely
The process of eating the leek.

Nicholls, Nepia and Cooke
All played like a book,
As did Parker, the Brownlies, none fleeter;
And more I could name
Who have just as much claim,
Were it not for the bonds of my metre.

Yet it might be as well,
In case our heads swell,
To remember a former mishap;
Let us not crow too loudly,
Or bear ourselves proudly.
South Africa’s still on the map.

Then here’s to the boys
Who have made such a noise
In all lands where the oval is kicked,
While they’ve burnished her fame,
They have guarded her name,
And returned to New Zealand “unlicked.”

This is a classic New Zealand poem by Robert J Pope. I first came across his collections in the Poetry Archive of New Zealand Aotearoa, when I was editing a book of this country's cricket poems in 2010. I included Pope’s ‘King Willow’ in A Tingling Catch: A Century of New Zealand Cricket Poems 1864-2009. 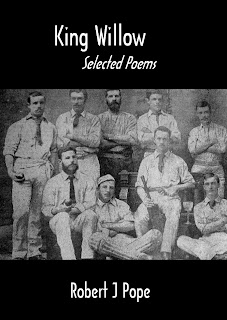 I became intrigued. Subsequently, I picked up copies of his books second-hand in Lower Hutt and Wellington and in the Alexander Turnbull Library I discovered more, including manuscript books, a school songbook and scrapbook that Pope and his daughter had deposited. The work was all out of copyright restrictions at that stage, and I decided it could be of value to have the best of his work collected. King Willow: Selected Poems (HeadworX 2012) is the result. 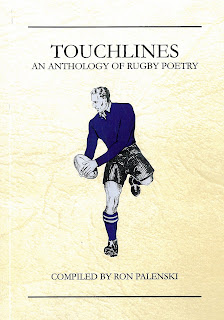 Pope was not a major poet of the English language but I believe he was a significant one in the context of New Zealand poetry. His poetry was always competent and well made with an ability to mimic and parody the more famous works of his era and revitalize them in a New Zealand context. His most interesting poems concern the All Blacks tour of Great Britain, France and Canada in 1924/25.

When I posted Pope’s rugby poems on the Poetry Archive website during the IRB Rugby World Cup 2011. I was uncertain how much interest there would be, but to date, the poems have had over 3,500 visits. All Blacks historian Ron Palenski was one of the visitors, and included a few of the poems in his just-published anthology of NZ rugby poems Touchlines (NZ Sports Hall of Fame, 2013) – which he says was inspired by A Tingling Catch.

Perhaps the best of these is ‘The All Blacks’ which would not be out of place in any future anthology of this country’s verse. As poet Ernest L Eyre (also included in Palenski’s anthology) once wrote of this era and the earlier Originals tour of 1905/06:


Ah, you boys who play at Rugby ev’ry weekend on the green
You will never see such matches as we veterans have seen!
Though you may play clever football, of a new and later brand,
You don’t possess the “ginger” of old Rugby Football Land.

For the “All Blacks” were the heroes of that land of wondrous fame:
They had overrun the Empire, and they made New Zealand’s name.

Well put. The patriotic nationalist verses by Pope while typical of their time are a vivid blend of what helped mold New Zealand’s name overseas, and few New Zealand names are more famous now than the All Blacks.

Brownlie, as Palenski notes in Touchlines, was the Colin Meads of his era. Of particular interest to me about this team is that my grandfather played during this era (1919-1929), and coached the North Shore Seniors with Bert Cooke in 1938. The team became the Invincibles, one of the greatest teams to leave our shores.

Each of these extraordinary teams (Originals and Invincibles) played with the old 2-3-2 scrum and wing-forward formation eventually outlawed by the English rule makers in 1932. While the Originals sole defeat 0-3 at the hands of Wales in Cardiff soured their remarkable tour, the Invincibles went one better.

The poem certainly gives us the fanfare of their arrival home in 1925. It first appeared in the New Zealand Free Lance, March 1925 (and I first found it in Pope's Turnbull Library scrapbook.) For those who enjoy watching the All Blacks each winter, this poem will ring bells.

King Willow: Selected Poems (HeadworX 2012) includes previously uncollected and unpublished poems and music scores accompany selections from Pope’s two published books. An appendix includes a selection of his prose writings, including his Wellington club cricket essay and sporting ‘contorts and retorts’. Copies are for sale at Unity Books in Wellington and can be ordered from HeadworX mpirie@xtra.co.nz


This selection of Robert J Pope not only ‘gives a substantial picture of the man and his times’, it gives a significant New Zealand poet the recognition he should have always had.

Robert J Pope (1865-1949) was a well-known Wellington poet, cricketer and songwriter in his day – and till the end of the 1940s he held a reputation as a national songwriter for his school song ‘New Zealand, My Homeland’ – but today, his work is little known and out of print. Pope’s poetry, lyrically gifted, showed musical flair and easy felicity of rhyme. He began writing and publishing in earnest during the Edwardian era, and his work notably covers the two world wars and the national politics of the period, 1902-1944.

His most interesting work concerns sporting verse on the 1924/25 All Blacks “Invincibles” tour of Great Britain and France and suburban satires on Wellington city-life. Pope was a leading light verse parodist of his day, publishing mainly in the Free Lance and The Evening Post, and was a precursor to the ‘Wellington group’ of the 1950s.

Touchlines: An Anthology of Rugby Poetry can be purchased from the NZ Sports Hall of Fame, Dunedin. Email: info@nzhalloffame.co.nz

This week’s guest editor Mark Pirie is an internationally published New Zealand poet, anthologist, literary critic, writer and publisher who is currently researching a book on his grandfather Tom Lawn’s rugby career. In 2010 he edited and published 'A Tingling Catch: A Century of New Zealand Cricket Poems 1864-2009'  http://tinglingcatch.blogspot.co.nz

The anthology of New Zealand science fiction poetry (IP Brisbane) which he co-edited with Tim Jones won the Sir Julius Vogel Award for Best Collected Work 2010. As a publisher (HeadworX) and author Mark has over 100 titles listed in the National Library of New Zealand. His website is www.markpirie.com and he co-organises and updates the 5000+ catalogue of PANZA, the Poetry Archive of New Zealand Aotearoa.

Remember to check out our sidebar to see which Tuesday Poems have been posted by our 30-strong team of poets.
Posted by Mary McCallum at 12:30 AM

It's interesting how often the poem refers several times to literature itself, and even to its own metre; as if laying out the field of play upon which it is engaged.

Apart from recording the exploits of that particular team, it drags you into its enthusiastic play through these tactics.