Sometimes the morning shakes itself from its moorings
To this world and lifts skywards with a fighter jet's roar,
Everyone lucky enough to be up and about looks to the east

But the sound follows idly a much faster comet too quick
For lazy eyes, so we ink in a sleek cross with exhausts
And settle for sound in place of sight for peace of mind.

A morning without wings, or adrift on one wing-beat,
Skimming waves for their fumes and saltlick,
That's gulls, waves, and wind, sharpening pines.

That's me happy to see that I am nowhere to be found,
Thrilled to be lost at last in things outside of myself
Until I belong to a world that ignores my footprint:

That pine umbrella, a flock, a handclap away from liftoff;
The pike of a heron, on one pirate-foot, stalking its reflection.


This poem appears by kind permission of the author 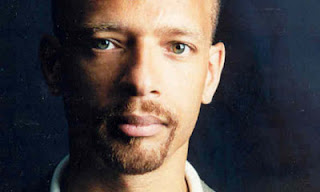 'I should never ask / directions to my childhood,' writes Fred D’Aguiar, 'there is no way back home; home is always elsewhere.' This sense of dislocation is at the heart of his writing, in particular the complex legacy of slavery and colonialism.

His latest collection of poetry, The Rose of Toulouse, from which this week’s poem is taken, traces the places he has lived, together with their histories and his own. His transformations and shifts – between Britain, Guyana and the USA – are his identity: 'Each year I travel, my passport photo / looks less like me.'

'My first scrape with the arts happened in Secondary School, in London around age 13,' Fred remembers. 'An English teacher read a few poems to us and asked us to write imitations. I forget the poems now but I remember the feeling of liberation when I started to copy the poem in terms of my experience or to put it another way, translate my experiences as a teenager in terms of the given forms of the poems.

'A few years later another English teacher, Geoff Hardy, revisited the same poets and this time his readings made me pay attention to the poets themselves, to the intensity of feeling in their utterance. From that moment I knew I wanted to write but had no idea what I would write. ... This is wisdom miles after the event and partial wisdom at that, fashioned by my desire to turn a chaotic past of accidents and incidents into seamless narrative, or at least a story with as many of the crinkles in it ironed out by a highly selective process of recollection.'

Fred D'Aguiar was born in London in 1960 to Guyanese parents and grew up in Guyana, returning to England when he was a teenager. He trained as a psychiatric nurse before reading African and Caribbean Studies at the University of Kent, Canterbury. His previous collections of poetry include Airy Hall (1989; winner of the Guyana Poetry Prize), and Bill of Rights (1998; shortlisted for the T.S. Eliot Prize).

He is also the author of four novels, the first of which, The Longest Memory (Pantheon, 1994), won both the David Higham Prize for Fiction and the Whitbread First Novel Award. His plays include High Life (1987) and A Jamaican Airman Foresees His Death (1991), which was performed at the Royal Court Theatre, London.

You can hear Fred read part of one of his poems on the Poetry Archive, here. And If you want to order The Rose of Toulouse at the special price of UK£8, with free UK delivery (the RRP is UK£9.95) go to www.carcanet.co.uk and use the code TRACE (it's case-sensitive) at the checkout - valid until 30th June.

When you've listened to Fred - do check out the sidebar for poems posted there by our Tuesday Poets.

This week's Tuesday Poem editor is Belinda Hollyer, a New Zealand writer and anthologist living in London. She doesn't write poetry - she thinks it's far too difficult - but other people's poems inform and sustain her life. The details of her other publications can be found on her website, and also on her blog, where her Tuesday Poems reside.

This is an utterly fabulous poem - the language and the rhythm leave me stunned. But then I rate Fred D'Aguiar very highly . . . Thanks for getting this and for posting it Belinda. I will try and order the collection if it's on Kindle - if not I'll have to wait!

Thanks so much for this comment Kathleen - I'm so glad you like it. (I posted another of Fred's today, so do also check my blog.) I don't think Carcanet have done an ebook version though.

Awesome poem: so many great lines but I just love "The pike of a heron, on one pirate-foot, stalking its reflection"

"That's me happy to see that I am nowhere to be found,
Thrilled to be lost at last in things outside of myself
Until I belong to a world that ignores my footprint:'

What a privilege to meet Fred D'Aguiar and his work today, Belinda. As I wrote on my ref. to TP this morning, this poem is exquisite - haunting and spatially vast,

Thank you both (and for the extra treat of The Rose of Toulouse on your blog, Belinda.).

Thanks very much, Helen and Claire. I reckon Fred will be delighted by your responses.

As Helen commented, there are so many great lines in this poem and the line "The pike of a heron, on one pirate-foot, stalking its reflection" really struck me too as so vivid.

Oh, the first line is so honest, soft, peaceful - the morning shaking itself from its moorings. What a gift to be able to write like this. Thank you for sharing, Belinda and Fred!

I love the lines that others have mentioned, too, but especially:-


"That's me happy to see that I am nowhere to be found,
Thrilled to be lost at last in things outside of myself"

So glad to hear from Ben Hur and Elizabeth. Thanks for all your generosity, dear TPs!