No time like the '80s/ No future by Airini Beautrais

In 1989, my dad gets knocked off his motorbike.
He gets a court summons, to testify against the driver.
Because she is brown, and my dad has decided
the justice system is racist, he rips up the summons.

(A few weeks earlier, a housebreaker (brown)
who happened to be a father of six,
was shot dead by a neighbour (white)
who was let off).

Dad rips up his summons on the Holmes show.
It is very exciting. Reporters come to our house.
I put on my best hair-tie, the one with a white gauze flower,
and my siblings and I roll around the floor on camera.

After it screens, the phone calls start.
‘I’m going to drop a bomb on your house,’
a weirdo tells my mother.
And another weirdo, or possibly the same one

is going to rape, torture and murder
my sister and I (aged four and six).
Like Holmes used to say,
‘Those were our people today.’

It is the end of a dark decade. One that began
with sport and politics shouldn’t mix
with the Red Squad, chanting:
Root more, eat more, drink more piss.

my parents included, paddling out in kayak
and mullet boat. They lived their lives
as if there wasn’t a madman on the trigger
although there was – in fact, there were several.

The Russians flying jets into British airspace,
and the British flying theirs in circles around them,
like some bizarre avian courtship, a dance of death.
‘You’d seen films about Hiroshima,’ my dad says,

‘100 000 people being incinerated.’ Did you think
nuclear war was a definite possibility? ‘Oh, shit yes.
And you’d ask yourself, what would you do, if they bombed Auckland?
Would you run away, or run towards it?’

What went through Reagan’s head, as he shifted
from butt-cheek to butt-cheek? Or Thatcher’s? Brezhnev’s?
We’ll never know. My mother hangs up the phone.
My father stops riding a motorbike. They live their lives.

We aren’t allowed water pistols. They give us balloons
which read ‘I want to grow up not blow up.’
We sew a patchwork peace flag,
‘Tutira mai nga iwi.’

In 1990, on Hiroshima Day, we dig a hole in the sand,
put a kauri tree in. We throw some flowers,
like there aren’t new wars unfolding,
although there are. 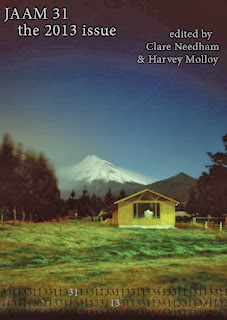 I came upon this poem in the latest issue of JAAM, which is only just back from the printers. I had a sneak preview while proofreading the issue, and this poem is one of my favourite in the issue. It resonates with me especially because I remember that time. I'm a little older than Airini, and so presumably remember more of the 1980s, but I very much recognise the things she's saying. The madmen with their fingers on the triggers - the constant threat of nuclear war.

I love this poem, not only for its story, its narrative, but also for the poemness of it. The difference the line breaks make, the spare intensity of the language. I also love the hope. I'm a sucker for hope. In the midst of the 'dark decade' her parents have been bringing up children, living their lives, planting trees.

Airini says of this poem: 'In writing a long poem in response to anarchist bomber Neil Roberts, I kept coming back to the characterisation of the 1980s as a time of impending human doom. The incidents related in this poem are taken from my own life, and in relating these I hoped to reflect a sliver of New Zealand society at the time. My parents were involved in the 1981 anti-tour protests, and clearly the scars from that time hadn't faded by the end of the decade. I was interested in the way my parents integrated child-rearing and political activism. I don't know how I would explain to a small child what "I want to grow up not blow up" means.'

Airini Beautrais lives in Whanganui. She is the author of two collections of poetry, Secret Heart and Western Line, both published by Victoria University Press. She is currently working on a PhD in creative writing, on the subject of narrative poetry. 'No time like the ‘80s/ No future' is from a long narrative poem, Dear Neil Roberts, written during 2012, reflecting on an incident that happened 30 years earlier, around the time the author was born. Neil was a 22-year-old punk anarchist who blew himself up outside Wairere House, Whanganui, the building which housed the police computer system. It is believed that Neil’s act was a symbolic protest against the growing authority of the state and its intrusion into the lives of ordinary people.

This week's editor is Helen Rickerby, whose new poetry collection, Cinema, will be published by Makaro Press early next year. Her previous two-and-a-half poetry collections are My Iron Spine (HeadworX, 2008) and Abstract Internal Furniture (HeadworX, 2001), and her poem sequence Heading North, which was  published in a hand-bound hardback edition by Kilmog Press in 2010. She runs Seraph Press, a boutique publishing company that has a growing reputation for publishing high-quality poetry books, and she is co-managing editor of JAAM literary journal. She blogs irregularly at wingedink.blogspot.com.

Do check out some of the other Tuesday poets and poems that you'll find on the sidebar on the left.

Email ThisBlogThis!Share to TwitterShare to FacebookShare to Pinterest
Labels: Airini Beautrais, Helen Rickerby, JAAM, Neil Roberts, No time like the ‘80s/ No future

Excellent. Excellent. Many thanks, Helen and Airini.

I love that you're a 'sucker for hope', Helen - I am, too. Where would we be without hope?

Thanks Claire. I was thinking about that this afternoon, that I'm a sucker for hope. Somewhere along my life I've become an optimist (I blame Sean). I'm not that optimistic about the big things in the world - that people with power will use that power well, or world peace or that sort of thing, but I am optimistic about what I can do in my own life - just like Airini's parents. Their hope and optimism seem to be at the level of family, and their own lives, even as they try to make the larger world a bit better.

I loved the poem on first reading. I was immediately engaged with the poem--it spoke to me and I was caught in its hooks. It seemed direct and real and I wanted to include it in Jaam.

This is an important piece of work for what it says about New Zealand at the time Airini. The fact that it is an extremely readable narrative poem adds to its importance. Thank you for writing it and thank you Helen for posting it.

I was in my 20s during the 1980s and so this poem seems very real to me. It embodies that oft-used phrase, "the personal is political". Thanks, Airini and Helen.