placing herself close
to the ocean

when whales surfaced
she saw

the amazement of men
on their wedding night

she scraped her learning
from medical notes

there’s Clint Eastwood placing
a bridle on his horse

I need a bit of guidance, I say
and he turns to doff his hat

the way cowboys do and I ask
the approximate whereabouts

of the nearest ox
and he hands me a pistol

you can do this, he says
so now I’m in charge

of a Colt but how to load
or fire and time is running out,

in a haybarn, your eyes fixed
towards the door, somewhere

a gramophone playing,
all the good husbands dancing

you do what you can – hunger
merits our grief

how to shoot those ox
.
© Frankie McMillan

'at night my dead mother appears wanting soup' was Highly Commended in the NZ Poetry Society (NZPS) International Competition 2014 and subsequently published in the NZPS anthology Take Back Our Sky (2014.)

Both poems are featured on The Tuesday Poem Hub with permission.
.
Editor: Helen Lowe
.
I am continually struck afresh by the way in which Frankie McMillan's poetic voice exemplifies the exhortation of Emily Dickinson that as poets we must "tell all the truth but tell it slant." Frankie's poetry always encompasses a perception of the wonder, absurdity, and humour in the world, but also picks out oddities and the quirks in the everyday that many of us, I fear, pass by or simply do not see at all.

In looking for a feature poem to celebrate Frankie's second collection, There Are No Horses in Heaven, (which is being published this very Thursday by Canterbury University Press) I was keen to select one that reflected both Frankie's unique slantwise perspective, but also her curiosity about the foibles of life and people, while also conveying a sense of the surreal. In the end, the best way to do that, I felt, was to feature not one but two of her delightful poems.

Hour glass opens with the corsetière and juxtaposes "the amazement of men on their wedding nights" with another distinctive element of Frankie's poetry, the concreteness of the real, in this case corsetry "threading whale bone/through cloth", which is in its turn set alongside the corsetière's view of whales as "bustles, derrières." In light of acquaintance with Frankie's earlier poetry, I feel there may well be an actual corsetière upon whom this initial sequence of the poem is based – although the whole conception may equally well have sprung entirely from her imagination.

In at night my dead mother appears wanting soup we see a shift in poetic gear, moving from a more remote "observation" of the corsetière to a distinct "personal" voice. This is definitely Frankie McMillan at her most surreal, where "I" is dispatched on a quest for soup by the dead mother. I love the dream-sequence feel of this second poem, which is also – another distinctive Frankie McMillan element – very cinematographic, especially when it morphs into actual cinema going:

there’s Clint Eastwood placing
a bridle on his horse"

Now the poem embarks fully on Frankie's signature mix of the surreal with humour and more than a dash of the absurd, as "I" seeks guidance of Clint Eastwood and is dispatched to slay the required ox with a Colt while "time is running out."

Yet however slantwise, Emily Dickinson's stricture was that we must "tell all the truth" – and there is truth here. As readers, we experience it in that sense of the dream mission to connect with a loved one (in this case by providing soup) – a mission that can never, however close we may come, quite be fulfilled – that often follows a death. This intermingled sense of desire with impossibility is conveyed through:

"you see light leak around the edges
the way you might if trussed up
in a haybarn, your eyes fixed
towards the door..."

and the concluding regret, however whimsical, of:

"you do what you can – hunger
merits our grief

how to shoot those ox"
.
If only we had, and could, indeed.
I would like to thank Frankie for allowing me to feature both Hour glass and at night my dead mother appears wanting soup with you today and hope you enjoy reading the poems as much as I have enjoyed sharing them with you.
. 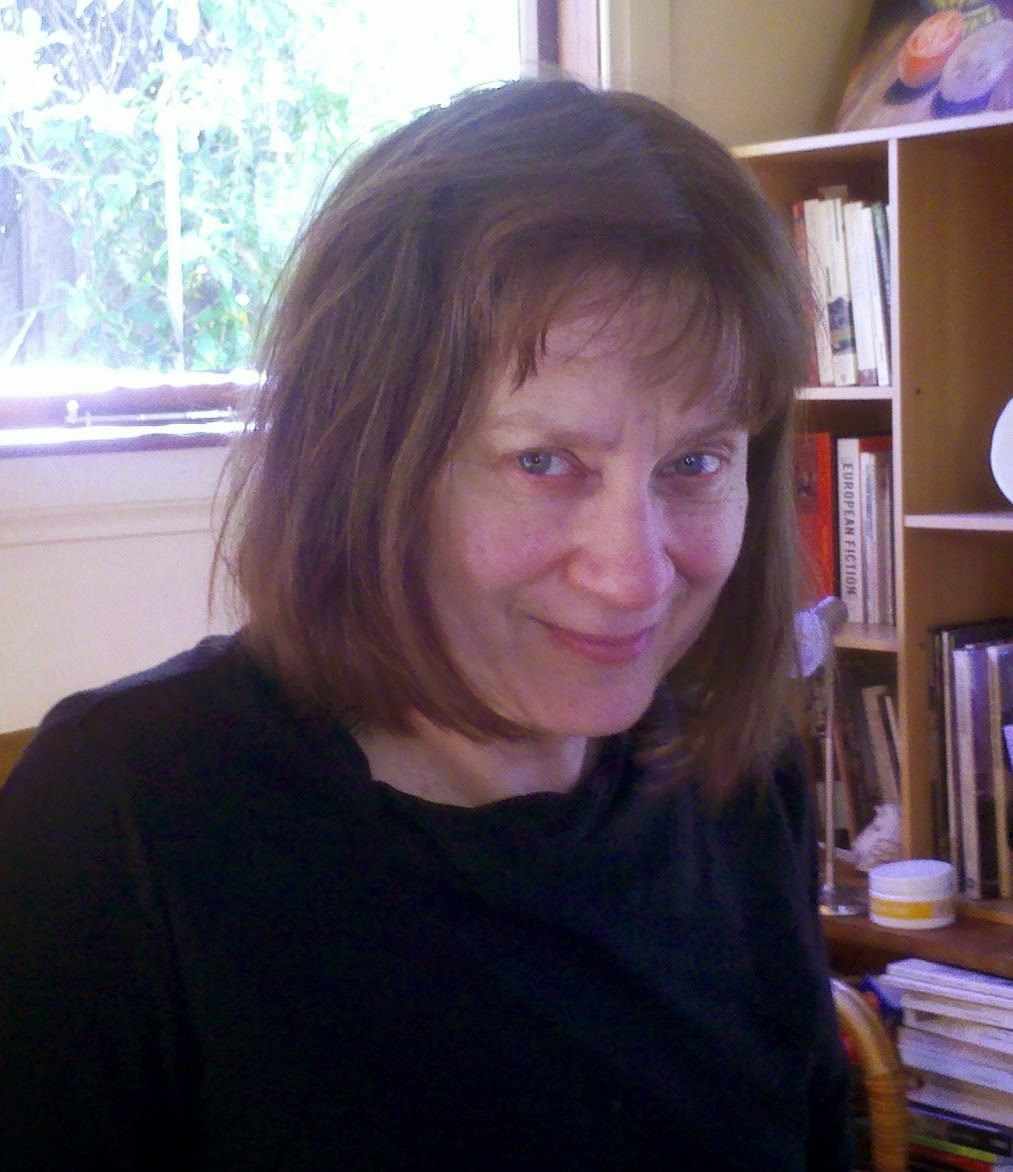 Frankie McMillan is the author of The Bag Lady’s Picnic and other stories, and a poetry collection, Dressing for the Cannibals. In 2005 she was awarded the Creative NZ Todd Bursary. In 2008 and 2009 her work was selected for the Best NZ Fiction anthologies. Other awards include winner of the New Zealand Poetry Society International Competition (2009) and the NZ National Flash Fiction award (2013). In 2014 she held an Ursula Bethell writing residency at Canterbury University. Her next book of poetry, There Are No Horses in Heaven is to be published by CUP in March, 2015.

Today's editor, Helen Lowe, is a novelist, poet and interviewer whose work has been published, broadcast and anthologized in New Zealand and internationally. Her first novel, Thornspell, was published to critical praise in 2008, and her second, The Heir of Night (The Wall Of Night Series, Book One) won the Gemmell Morningstar Award 2012. The sequel, The Gathering Of The Lost, was shortlisted for the Gemmell Legend Award in 2013. Helen's fourth novel, Daughter Of Blood, (The Wall Of Night Series, Book Three) is forthcoming in January 2016. She posts regularly on her Helen Lowe on Anything, Really blog and is also active on Twitter: @helenl0we

In addition to today's feature be sure to check out the wonderful poems featured by the other Tuesday Poets, using our blog roll to the left of this posting.

Absolutely love them both! Thanks for posting these today Helen and Frankie.

Fine pairings - the two poems, Frankie the poet & Helen editor, bustles and a haybarn, cloth and 'your mother in a doorway with her bowl'. . . Thank you both.

Do I sound silly if I say I love love love Frankie's words? '

Thank you for sharing, Helen! Must re-share...

Really love these - thank you Helen, for posting.