The Votive Angel by Moira Wairama

Thinking it’s the delivery pizza,
he opens the door
to The Votive Angel,
arrayed in slogan-splattered silks,
carrying her sword-sharp pen.
Silently she strides past him,
her silver boots crunching empty beer cans.
“Apathetics,” she roars to the house at large,
“Arise and vote.”

The woman in the kitchen stirring soup looks up,
“Who for, dear?” she inquires amiably.
“Think,” expectorates the angel,
her spittle splattering the bubbling soup.
Around the bathroom door appears
a freshly painted mannequin’s mask.
“I like the one that always smiling,” she beams.
The spin doctors hiding in the shit house high–five each other.

From the darkest corner of the room
the pin-pointed pupil yawns widely.
“No point voting, can’t trust fuckin’ politicians,
come the revolution I’ll be out there,” he mumbles.
Seizing his carefully groomed dreadlocks,
The Votive Angel swings him ceiling high
to drop and fall beneath a wall-sized TV screen.

Where images of teeth white infomercial beauties
are suddenly replaced
by battered, bleeding protesters
struggling against a tide of helmeted batons
fiercely fighting for the freedom
to vote.
“Bitch,” snarls the patched one threateningly
As he strains to rise from his proverbial crouch
“My fucking right not to.”
Screeching in fury,
the angel draws her politically incorrect whip
and drives all before her out
into the street where others gather in amusement.
“Vote, you Apathetics,” she screams distraught,
her silver boots stamping on unyielding asphalt.
“Vote,” she banshee wails to the indifferent crowd,
her stirring words swallowed by a silent majority.
She watches grim-faced as people
scuttle back inside to watch American Idol
while others follow sheep-like the sharp-suited man
who suddenly appears to leads them to the nearest pub.
“I’m paying,” he calls back cheerfully.
The Votive Angel shrugs her shoulders in defeat,
unsettling her wings from which feathers fall.
She takes off her silver boots
and bare-footed walks after the promise of free drinks. 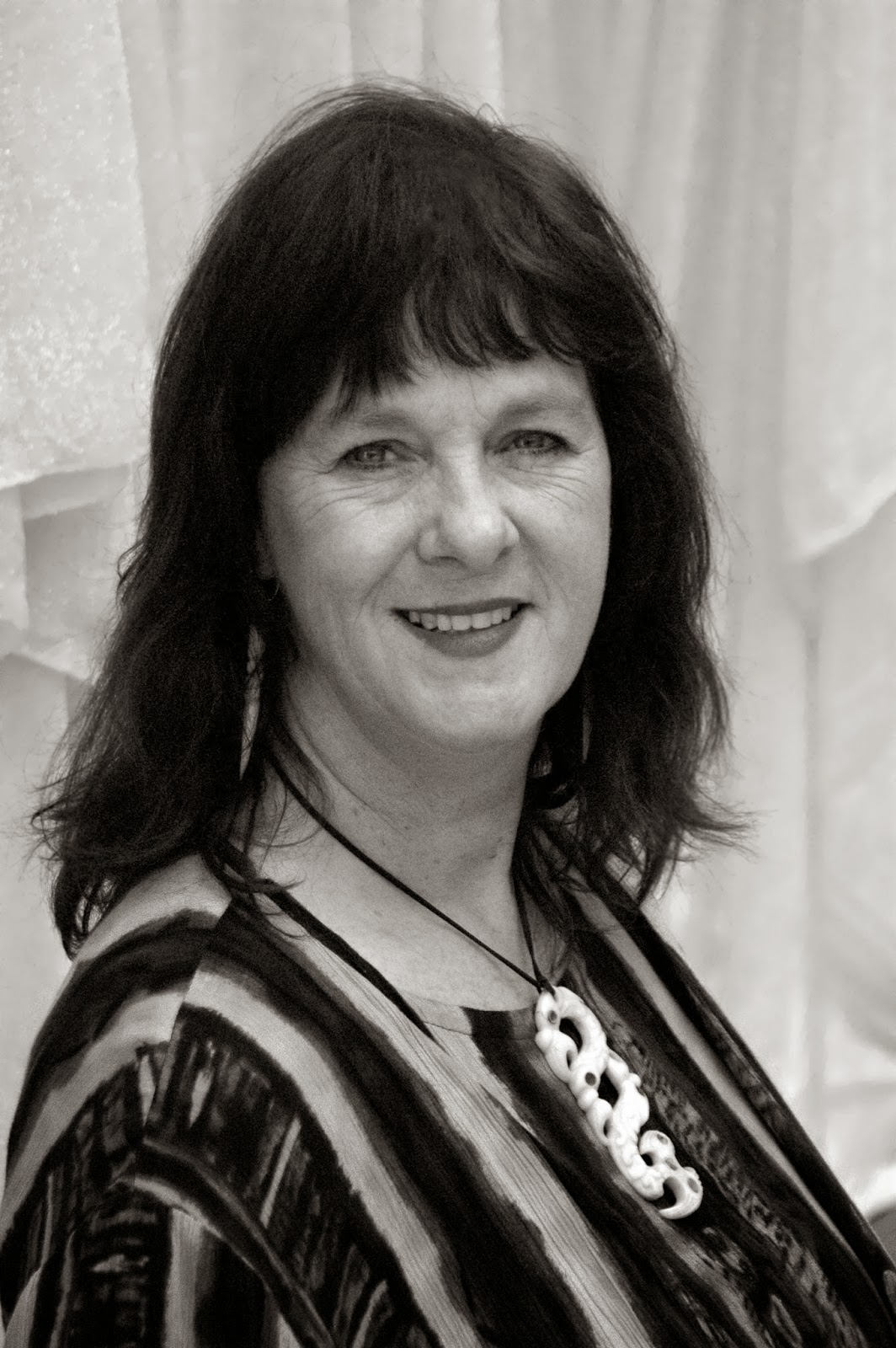 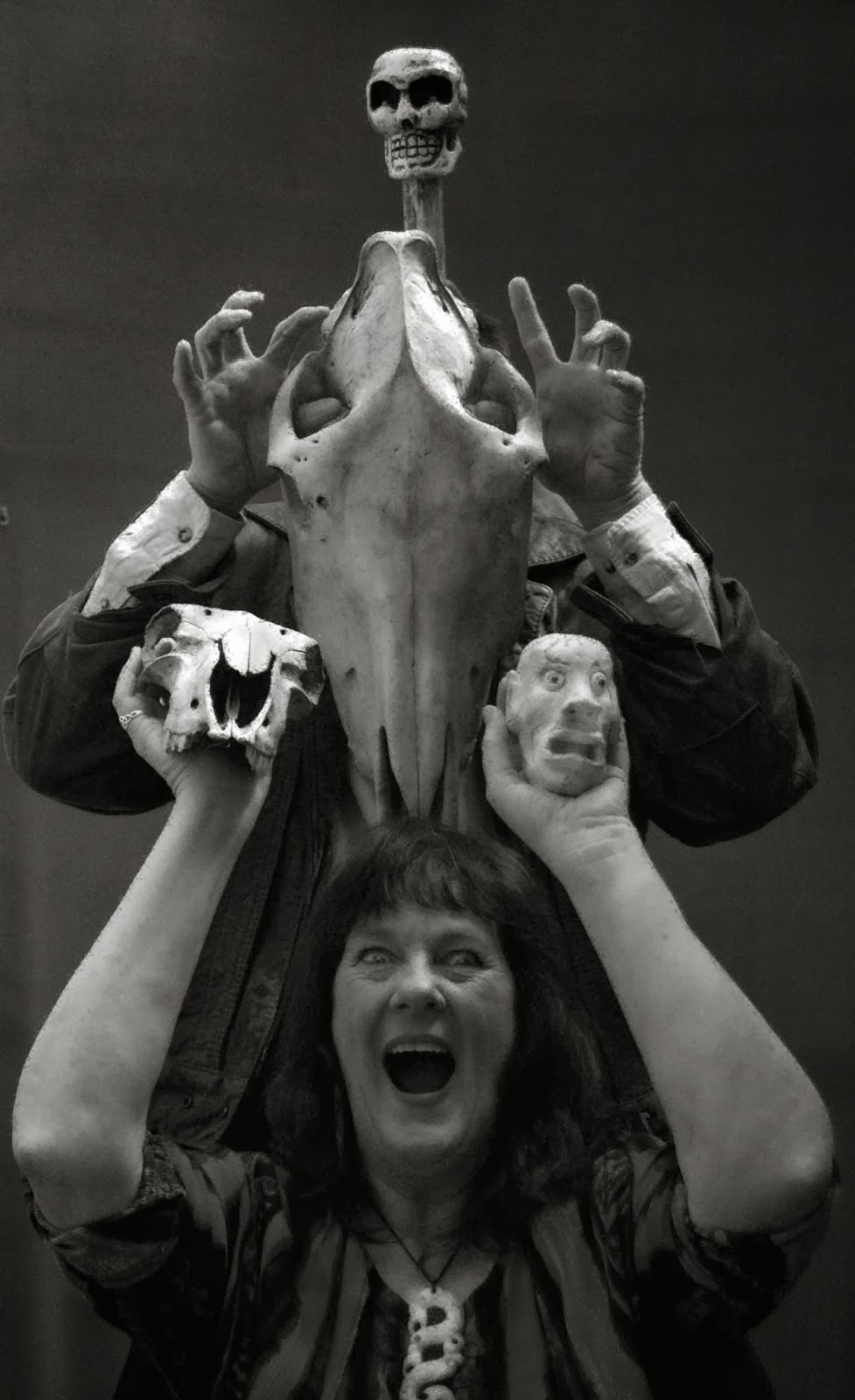 MOIRA WAIRAMA is a Wellington storyteller specializing in bi-lingual tellings of traditional legends, an award-winning writer, a poet and a teacher. With her partner, Tony Hopkins, she is co-founder of Baggage Co-op, which has produced a number of award-winning shows including Po@rt, the art of Poetry, Questions and Te Kauta (all written by Moira) and most recently Te Haerenga, a journey of identity which toured to the United Kingdom in 2012. She has also written a number of radio dramas.

Moira was coordinator of the Hutt Valley Angus Inn Poets Pub for over a decade and is herself a performance poet with work in a number of anthologies, including works for children. She writes for children in both English and Maori and has won several awards for her books The Puppet Box and The Taniwha of Wellington Harbour.  Currently she is working on a picture book for women with artist Linda Tilyard and trying to make friends, rather unsuccessfully, with the spiny-backed, foul-breathed dragon of technology.

I first met Moira through the Wellington theatre scene in the mid-1990s. I knew Moira first as a performer and a storyteller. Then I became well-acquainted with Moira's partner, Tony, when he and I were cast to perform in a production of Driving Miss Daisy. Tony, who is African-American, was to play the part of the chauffeur, made famous in the film version by Morgan Freeman. Unfortunately, after much rehearsal, the production was abandoned because the director couldn't raise the funding. That's theatre for you.

Later, I saw a powerful production of Moira's play, Questions, a play about youth suicide inspired by real-life events. The play went on to be adapted for and screened on television with a television panel discussion following the screening.

So, like Shrek's metaphor about the onion in the first Shrek movie, I witnessed the various layers of Moira's creative life peeled away. Then she invited me to read at the Angus Inn Poets Pub in Lower Hutt where I became a semi-regular reader and audience member.

Moira is a creative force to be reckoned with and a lovely person as well. She has a quirky, dry sense of humour which comes through in this poem which should resonate with all Kiwis in this election year. Please follow the advice of the poem, as I'm sure all erudite Tuesday Poets already do, and exercise your democratic right.

This week's editor,  Andrew M. Bell, writes poetry, short fiction, plays, screenplays and non-fiction. His work has been published and broadcast in New Zealand/Aotearoa, Australia, England, Israel and USA. His most recent publications are Aotearoa Sunrise, a short story collection, and Clawed Rains, a poetry collection. Andrew lives in Christchurch with his wife and two sons and loves to surf.

A comical and serious call to action. I like how we see her violent side. And, sadly, her failure. Oh dear. Not an optimistic poem, but a good one.

Thanks for this, Andrew. Great to be introduced to this poet.

I'm not a famous poet yet.
But I’ll be glad if I would know your opinion about my poems.
You can find them at my blog:

I like the play upon words votive angel suggests.
Lots of energy in this poem...I was a bit sad she gave up...but isn't that just what happens sometimes. Great to meet you Moira.