Abdullah, The Servant of God – by Wade Bishop

He was not a handsome man
not even in possession of a face that was easy to look into
it was journey twisted and wrinkled like a baby at birth
..............only his never smoothed
the folds filled with hopes and wonders, longing and dreams
lost in the creases
describing loyal lines in a resume of hard work

He laboured with energetic toil for the joy and happiness of strangers
… strangers like me that turned up at the hotel cairo
a mis-named rooftop respite from the surging life-affirming chaos that once was aleppo.

when you spoke with Him, He fixed you with a present, earnest eye
searching your face and body for the words that filled the spaces
of those He didn’t know
..............it was His right eye
because His left eye stared always left
and heavenward to some other place.

i met most of them on a bus along the euphrates to palmyra
… late i hadn’t paid the fare
i stepped on,
all places taken and the aisle long filled with people and piles of boxes of goods
eight Abdullahs stood to offer me their seats
..............and no-one would sit till i honoured one of them as their guest
shabbily dressed as i was compared to them

..............an Abdullah paid for my ticket
and five more passed it back to me so i could stay seated
then when we stopped for a rest yet another pressed food to my hand
to ensure i’d eaten
and still another a cold cold coke …
because the sun was beating hard on our heads ...
..............they could tell the desert sweats were new to me

then when my destination became known
somehow it flowed like the euphrates to the ear of Abdullah the bus driver
He made sure i was first out the door;
bypassing the bus station as irrelevant for the history-made edge of palmyra
to the steps of my hotel,
a short walk to the great temple of baal
.............. – now gone.

just as all these Abdullahs may now also be gone.

They may all be dead now.

and if They are all dead now – and They were right about God
and i am not
.............. then Allah will be smiling upon Them
for They were true to His Word: to welcome strangers as brothers until they proved otherwise.

in His eyes: Ambassadors of their Faith and of simple – selfless – human kindness
He will bless Them with His hand upon Their heads hung low
as Their tears flow for Their sisters and brothers, fathers and mothers – daughters & sons

who run
from the missiles,
the bombs
and the guns

Reproduced on The Tuesday Poem with permission.

For this week's feature, I asked Wade to share the background to his poem, Abdullah, The Servant of God, and he kindly provided the following:

"Syria was never on my "must see" list when I was traveling, but just happened to be "on the way" when I planned an overland trip from Turkey to Egypt in 1997. It was one of those rare quiet periods in the Middle East (shattered by the murder of 70 odd Scandinavian tourists at the Mortuary Temple of Hatshepsut in Egypt at the end of it, by a jihadist group based in Middle Egypt). Syria has always been sold as the "hotbed of terrorism", the home of "tea towel wearing extremists" ... I wasn't sure what to expect.

What I did find was a country more welcoming, friendly and generous than any of the 40 or so I have been fortunate to visit. This poem is based upon the absolute truth of my bus ride from Aleppo to Palmyra, which epitomised my experience there ... I have therefore found myself in tears whenever I hear the "news" about what is happening there right now. In this poem I give some small voice to the story that is rarely told of the real people who live there."
– Wade Bishop

Editor's Commentary:
I have always believed that it is not enough for poetry to be technically accomplished, it must also have "heart." Part of what it means to have "heart", in my lexicon, is that the poem will in some way illuminate an aspect of the human condition, whether at the personal or societal level. And if the art of poetry is to remain relevant, then we must have poets, and poems, that address themselves directly to the issues of the day – not in the manner of a pamphlet or a letter to the editor, but as powerful and compelling poetry.

When I first heard Wade read Abdullah, The Servant of God at the Canterbury Poets' Collective* several weeks ago, I was struck by the extent to which the poem not only addressed a real and pressing international issue, but did so out of direct experience. The authenticity of that experience speaks from every line of the poem, from the first introduction of Abdullah, who is "not a handsome man" to the wonderful account of the bus ride from Aleppo to Palmyra where the stranger is treated as an honoured guest.

From the past, we come forward to the stark present and the poem's painful but also profound conclusion. A powerful poem, I thought, listening to it for the first time, and one that it is important to share – an opinion that did not alter when I read the poem on the page. So I asked Wade if I could feature it on The Tuesday Poem today and was delighted when he agreed.

Since then, we have been overtaken by the events of the weekend in Paris, and the bombs of the previous week in Beirut. To be honest, for a moment I wondered if this was the best time to feature Abdullah, Servant of God. Only to almost immediately realise that if I believed in the poem, in its authenticity and honesty, then there could be no better time to publish it.

In my view, Abdullah, Servant of God speaks to the heart of the times. I hope it also does the work of poetry and speaks to our hearts today. – Helen Lowe

* Abdullah, Servant of God was an Open Mic winner in the Canterbury Poets' Spring Season, which concludes tomorrow, Wednesday 18 November. 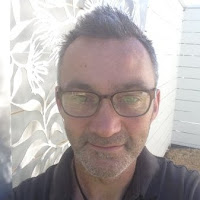 Wade Bishop: Born too late to see the Moon Landing for himself at the time, Wade made up for it by staying up too late and getting up too early until at last he was able to watch the Space Shuttle Colombia take off for the first time ever! ... And even now he is continually in awe of the vastness of space and our very small lonely place in it  –  and it is in this that he finds perspective. Wade has travelled a great deal, worked in advertising, radio, the internet, repairing earthquake damaged homes  – but returned to writing poetry and prose more seriously in the last year and is working towards his first "collection". Wade has a website for his visual and written musings at www.iammenotyou.com (Not all musings reflect the author's actual points of view though!)

In addition to today's feature be sure to check out the wonderful poems featured by the other Tuesday Poets, using our blog roll to the left of this posting.
Posted by Helen Lowe at 12:01 AM

This is a chilling image:

a short walk to the great temple of baal
– now gone.

just as all these Abdullahs may now also be gone.

They may all be dead now.

And then, after the running and running... the remarkably uplifting ending. Such a timely poem. Very glad to read this today, Helen and Wade. Thank you.

"To be honest, for a moment I wondered if this was the best time to feature Abdullah, Servant of God. Only to almost immediately realise that if I believed in the poem, in its authenticity and honesty, then there could be no better time to publish it."

-- I offer a heartfelt, absolute position of support.

Helen Lowe, we missed you at the last reading of the CPC season where Wade read this poem again. It did not lose any of its impact, if anything, it was more powerful and touching when heard a second time.

I have never been to Syria, but I can identify easily with the themes of this poem as I have encountered other races and cultures who have been vilified in the Eurocentric world view and often found this to be far from the truth.

The great majority of people, regardless of race, culture, religion or creed, just want to live in peace and raise their families and make their children's lives better than their own have been.

One of the most decent, kindest, generous, warm-hearted people I have ever met was a poor fisherman in northern Bali who was a devout Muslim.